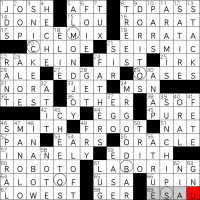 hello and welcome to episode #612 of matt gaffney’s weekly crossword contest, “They’re Falling for You”. in this week 3 puzzle, the instructions tell us we are looking for a snack you might buy from a vending machine. okay, what are the theme answers? there are six vending machine snacks in the grid, all down answers, and all clued similarly. presented from left to right in the grid, they are:

what do we do with these? taking a hint from the title and the vertical orientation of the answers, i surmised that the mechanism had to do with “falling” (or moving downward in the grid), and then the first thing i tried worked: each snack food contains exactly one instance of the letter in its clue. then counting down from that letter by the number of squares in the clue puts you on another letter. so for example, for SNICKERS we start at the I and go down 1 square, because we pressed I-1. that puts us on the C.

repeating the process for all six theme answer produces the circled letters in the screenshot above, which spell out COMBOS. hey, remember combos? that is pretty much the only way i’d eat a pretzel, but that’s just me.

this was a fun meta! easy enough, i think, but a mechanism i’d not seen before, so it was fun to work it out. i liked how all the coordinates in the clues were plausible vending machine inputs (letters only from A to I, numbers from 1 to 5); there was nothing far-fetched like “PRESS Q-12”.

that’s all i’ve got this week. i hope this puzzle satisfied your case of the munchies!