Fireball is a contest this week. We will post a review after the contest closes.

I crushed this in what I think might be my best time on a Thursday. I grokked the theme early on and that really helped to sort things out. 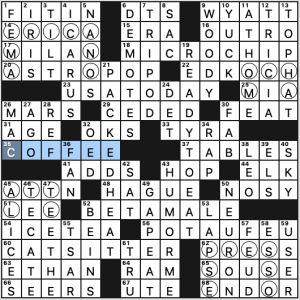 I took a second to look at the grid before I started and noticed the strangely shaped circled squares. My first thought was staples. But they turned out to be COFFEE / TABLES (35a, [With 37-Across, living room items found four times in this puzzle]). Each set of circled squares spells out a coffee drink starting at the bottom left, going up and over the “table,” and finishing at the bottom right.

In order, we have AMERICANO, MOCHA, LATTE, and ESPRESSO. I suspect cappuccino and macchiato were too much to ask for.

Cute theme, and each coffee is seamlessly incorporated in its section. I especially like that NE corner with ED KOCH, AT HOME, and TOP HAT doing the honors, with MICROCHIP, WOODY, and YUCK nearby. 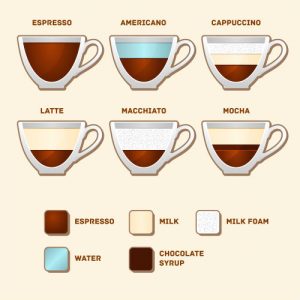 Other goodies in the grid include ICARUS, USA TODAY, ASTROPOP, READY-TO-EAT, PACKED HEAT, HUMOR ME, BETA MALE, and CAT SITTER. That’s quite a lot of sparkly fill. Very nice.

I needed every crossing, though, with POT-AU-FEU [French meat-and-vegetables dish]. (Thankfully, those crossings were all fair.) According to its Wikipedia page, it is a French beef stew. Michelin-starred chef Raymond Blanc calls it “the quintessence of French family cuisine, it is the most celebrated dish in France.” I would have thought that title might go to ratatouille, but apparently the latter is made only with vegetables. Perhaps our resident foodies can give us more insight.

Other than that challenging bit of fill, everything else was remarkably smooth.

How’s your knowledge of quantum mechanics?  It might be handy to review SCHRODINGER’S CAT (6D, “Quantum mechanics thought experiment in which contradictory states exist simultaneously”) before we dig into what’s happening in today’s NYT puzzle.  Here’s a video from TED Ed on it:

All set? With that out of the way, let’s take a look at the two states this crossword can take.  First: 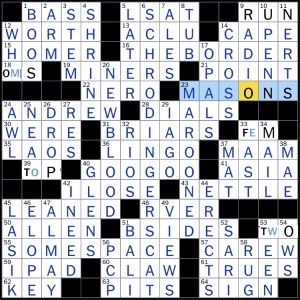 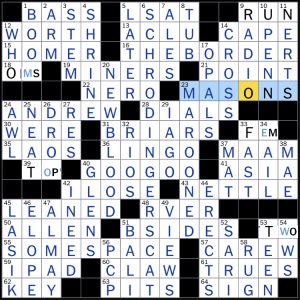 The acrosses determining these down clues remain OMS, FEM, TOP, and TWO, but the ability to choose which square is the rebus square gives a potential 16 ways this grid can be solved.  This is a interesting rendering to this scientific idea, and things like the symmetric pairings of CROSS/THE BORDER and I NEED/SOME SPACE are also very nice, given how constrained this grid must have been to figure out.  Well-executed, Andrew and John! 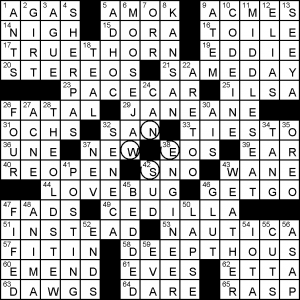 Today’s puzzle theme is a tad subtle, even with the four compass circles. The four directions are anagrammed in four long answers in their appropriate corners. TRUE(NORTH)THORN; DEEP(SOUTH)THOUS; MIDDLE(EAST)SEAT and THEOLD(WEST)STEW. The “wacky” clues are more tortured than most, but then the choices for theme entries are not many.