Matt challenges us to find a word heard in math class. Math is hard, according to Barbie, so let’s see how we do. 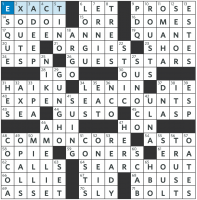 There appear to be five themers:

I mucked around for a bit, looking for things that could be “twos” — i.e. the Es and Ns in QUEEN ANNE, the STs in GUEST STARS — until it jumped right out at me, since QUEEN ANNE and QUANT are in the same row: 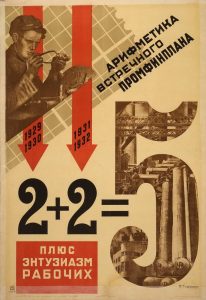 Take the letters added to the two added twos in order to get the five-letter words, and you get T O T A L, which is a word heard in math class and our answer.

Do you believe that 2+2=5? If everyone believes it, it must be true. The concept has a looong history, from many years before Orwell’s Nineteen-Eighty Four, as a figure for the false dogma that a successful propaganda campaign can get its adherents to believe (through coercion or simple gullibility).