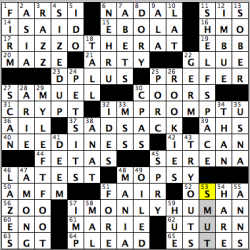 Hello everybody! Beware the IDES of March (32D: [Mid-month date])! Beware March Madness! Beware of all the green beer!

Today’s puzzle has us off to the races, as in each of the five theme entries in the grid are all multiple-word answers in which the final word can also be interpreted as a kind of race.

Something that I did not know until today occurred when seeing the clue for IMPROMPTU, and that that word is also used to described a short piece of instrumental music (32A: [Schubert piano piece with a “spirit of the moment” vibe]). Now I’m hoping that I don’t have music in my head any time I say that word going forward. Something else that enough of you do know is that Rafael NADAL has a chance this June at tennis’ next major, the French Open, to equal a once-thought unreachable milestone: tying Roger Federer’s record of 20 singles titles in men’s tennis (6A: [Tennis player nicknamed “Rafa”]). Loved the clue for PETSITS, and even though I’ve seen that type of mislead involving names of dog breeds enough times, I got caught not thinking of canines for a little while on this occasion (24D: [Takes care of boxers?]). That said, this still was a pretty rapid solve. There were not too many longish non-themed entries, but did like SIZED UP (4D: [Evaluated]) and TRYOUTS, with the latter reminding me of the time that I tried out for — and won — the lead role (Dr. Frankenstein) for the Halloween school play back when I was in fifth grade, only to back out days later because I was afraid that I might come down with stage fright (43D: [Auditions]). For those who have gotten to know me personally, I’m sure that hearing that I once had fears of stage fright is probably the last thing you would have expected. But, hey, I was 10!!! The worst part of that, outside of the internal shame I felt, was missing out on the Monster Mash dance duet that I would have performed with the person who was playing the Frankenstein monster. I could have been a dancing star!

“Sports will make you smarter” moment of the day: COORS (30A: [Beer from Golden, Colorado]) – One of my five favorite Major League Baseball parks that I have ever visited (probably in my top three, actually), COORS Field, the home of the Colorado Rockies baseball team since the stadium opened in 1995, has a few interesting facts about it. Most sports fans know that, given the thin air of Denver, the baseballs that are used during games there are kept in a humidor before their usage to retain some sort of moisture – though the baseballs still fly out of that park!! Also, the stadium’s dimensions are, by far, the deepest of any ball park in the majors, including the left (347 feet) and right field wall (350′) being around 350 feet from home plate. (That’s DEEP, and if you ever saw a game in person at Coors Field, you might be startled by the cavernous nature of the field.) But did you know that, during the stadium’s construction, dinosaur fossils were found underneath the plot of land, including a 1,000-pound triceratops skull?!?! That discovery actually led to the Rockies mascot, Dinger, taking the form of a purple triceratops. 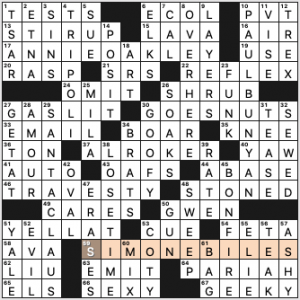 Familiar phrases that are adjective + star are reimagined as if they refer to a specific person or character:

Highlights in the fill include GOES NUTS, LOSE TIME (have you seen the Richard Gere/Edward Norton movie, Primal Fear? That redefines this phrase!), and BONFIRE. I did feel a little let down by the first two Downs, boring TSAR and ETNA, but the puzzle didn’t turn out to be loaded with stale fill (I’d have been surprised if it did, since Lynn is so good with smooth and familiar fill).

Women in the puzzle, besides two of the themers: GWEN Stefani, AVA DuVernay, Lucy LIU, and MILA Kunis. (CAL Ripken and ELIE Wiesel represent the chaps.)

THEME: Theme answers form a connected “word-string.” Am I saying that right? Is there an already established name for this type of theme? Not a word ladder… but what is it called?

I wish I had uncovered the theme earlier. I bet I could’ve gotten them all without any crosses and been done lickety-split! Instead, I didn’t try to consider what the longer answers had in common until I thought I spotted a dupe in DOWN/DOWN (guess I missed NECK/NECK and WEAR/WEAR in my haste!).

While it may not be the most original concept, it’s nicely executed, and I love the title. It’s fitting as to what is happening with the themers, and with them beginning/ending with CREW is cute.

Overall, a simple Tuesday offering, and one that is very accessible to newer solvers.

There is so much I enjoyed about Tuesday’s WSJ “Lead Time” puzzle by Debra Hamel. What a fun solve! 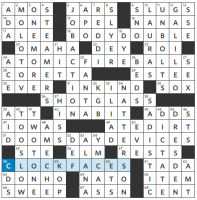 18A: BODY DOUBLE [Stand-in on set]
24A: ATOMIC FIREBALLS [Cinnamon jawbreakers]
36A: SHOT GLASS [It holds a belt]
51A: DOOMSDAY DEVICES [What evil geniuses might construct in their lairs]
58A: CLOCK FACES [Their third hands are their second hands, and a hint to the starts of the starred answers]

Random thoughts:
– Women were featured throughout this puzzle in a lovely way, starting off with Tori AMOS and ADA Lovelace at 1A and 1D! Susan DEY, CORETTA Scott King, ESTEE Lauder, LAURAS Linney and Dern, Dr. Ruth, EVE, and ALANA de la Garza. Wow, that’s more women in one puzzle than some weeks have in all of their puzzles combined. Brava!
– There were also some fantastic clues in this grid! In addition to the clues for themers SHOT GLASS and CLOCK FACES above, I enjoyed the seemingly paradoxical clue for ITEM: [Single thing, or a couple].
– There was some playfulness in the puzzle, too, especially with [It follows “Down low!”] TOO SLOW. That brought a smile to my face while solving.

Does anyone know if WSJ is taking part in Rebecca Falcon’s Crossword Women’s March, where crossword outlets feature puzzles constructed by women each day of the month? The first two puzzles of March in WSJ are by women, so I’m hopeful we’ll see a full and fantastic month of diverse and lovely puzzles by women! 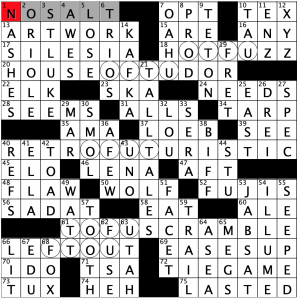 It took me a second to work out what was happening here, but it isn’t that complicated after all! You might be in the mood for some vegan entrees after seeing this theme! The revealing entry is at 61A:

Are you hungry yet? I would normally say that the circles are unnecessary in the theme revealer, but in this case, since it isn’t the last one, it works fine. This may be just an editorial preference as opposed to a convention of some sort. Either way works for me. 4.3 stars for this Jonesin’.

That is all! Matt, are you going to be in Stamford? 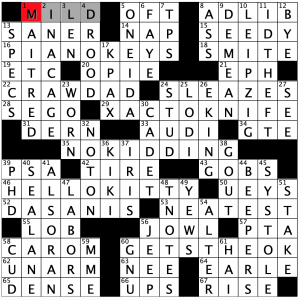 I am seeing Gail and Bruce’s byline quite a bit!

Speaking of 16A, I have a grand piano at my house that needs some TLC, especially on one of the broken PIANO KEYS! Nice, simple, uncomplicated theme, which is nice. The theme entries are all nice and lively. This puzzle definitely did not Tuez! 4.4 stars today.

Have a great week everyone! Spring is nearly here!