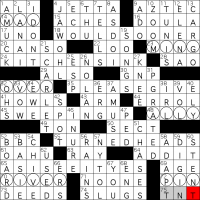 hello and welcome to episode #613 of matt gaffney’s weekly crossword contest, “Decision Time”. in this week 4 puzzle, the instructions tell us we are looking for a frequently faced decision. okay, what are the theme answers? there are six long across answers whose clues have a parenthetical number:

i got the first observation pretty quickly, with a little nudge from the title: the last word of each theme answer is the first word in a common “___ or ___” phrase with its antonym:

but what about those parenthetical numbers? they don’t match the lengths of the paired word, nor can you take the nth letter of those words since DOWN doesn’t have 5 letters and NO doesn’t have 3 letters. but i couldn’t see what else to do, so i had to put the puzzle down for a couple of days.

when i came back to it, i had the idea that there might be six more theme answers hidden in the grid, one to match up somehow with each of those implied antonyms. (this is an idea i probably should have had earlier in the process.) and since all six parenthetical numbers were at least 3, they could well be the lengths of each partner answer. once i had the idea, it was not too difficult to find the partner answers. the first one i found was {Mississippi or Colorado, e.g.} RIVER, because DOWNRIVER is a word. but the others were a little trickier to find.

i was distracted for a bit by {Herman’s Hermits lead singer Peter} NOONE, because it looks like NO ONE, and i was looking for something that looked like NO + 3 more letters. but eventually i did find them all (they’re circled in the screenshot above):

reading off the first letters of the six extra answers in this order gives AM OR PM. i’m not 100% convinced that qualifies as a “frequently faced decision”—i mean, it’s a setting that you might have to specify when setting a clock or putting an appointment into a calendar app, but that’s not quite a “decision” to me, like “should we meet for lunch at 1 am or 1 pm?”—but it certainly clicked well enough based on the title and mechanism.

other than my quibble about the wording of the instructions, this meta was pretty great. it’s basically a two-step meta, but the first step was subtle enough for a week 2 and the second step was a doozy. i can’t remember this kind of mechanism having been done before. and there was variety in the way the concatenations worked: two pairs of words joined as lexical chunks to make a natural compound word (DOWNRIVER, TAKEOVER), two pairs joined where only the first word kept its meaning (SWIMMING, TAILSPIN), and the other two pairs were just charades with no lexical connection (LATERALLY, NOMAD). so matt was really keeping us on our toes!

that’s all the time i’ve got this week. how’d you fare on this one?