Women’s (beginning of) March continues with this lovely addition from Cheryl Phair. This appears to be her second published grid, the first being about a year ago here in the WSJ. I wonder if she’s any relation of rocker Liz Phair.

This one imagines favorite food dishes of certain celebrities who share a surname with the first word in the dish. 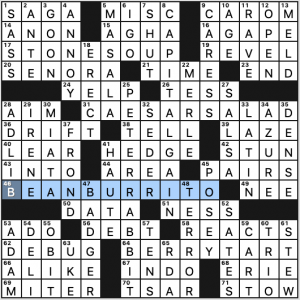 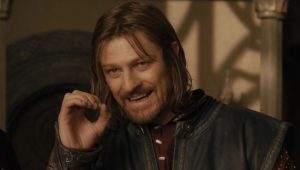 “One does not simply eat a BEAN BURRITO.”

Very cute. I like the consistency in that each celebrity is actually an actor, giving rise to the title. Here’s a nice article about craft service, the people who feed cast and crew all day long and well into the night.

CAPITAL GAIN and PETER RABBIT are our long Downs. The latter is fun, and while the former is usually seen in its plural form, it has a clue [Result of appreciation] that was nicely misdirecting (for me, anyway). MASALA, FROND, and BADGER are also fun entries. AGHA is rather stale fill, but that’s the only bit of it. 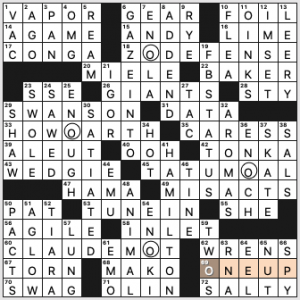 You ever head to Twitter after you finish the NYT puzzle, just to see what Crossword Twitter had to say about it? Turns out you can’t really do that on Super Tuesday.

Tracy’s theme revealer is 69a. [Outdo … or a hint to entering four answers in this puzzle], ONE-UP, and there are four answers that detour upwards from an O (circled in my grid) to spell out ONE within Down entries that include the letter string ENO.

The ONE-upped themers are in symmetrical slots, of course, and the ONE spots are almost symmetrically placed, with one pair being a square off from symmetry.

What I didn’t like about the theme is that three of the ONE-hiding entries are so blah: ENOKI ENOLA ENOCH. (ENOUGH is fine.)

Did not know: 47a. [Major city of west-central Syria], HAMA. I tried HOMS. The map tells me that Hama is 25-30 miles north of Homs, both on the road that connects Damascus and Aleppo. Also, if you remember the word NORIA from crosswords of yore, a watering wheel, check out the Hama Wikipedia page and see the historic norias that are about 3,000 years old.

Is this a word you’ve ever used? Because it’s making me giggle: 49a. [Behaves improperly], MISACTS. Go ahead and use MISACTS in speech and see if anyone understands what you’re saying. “Miss-axe? Meh-sax?” 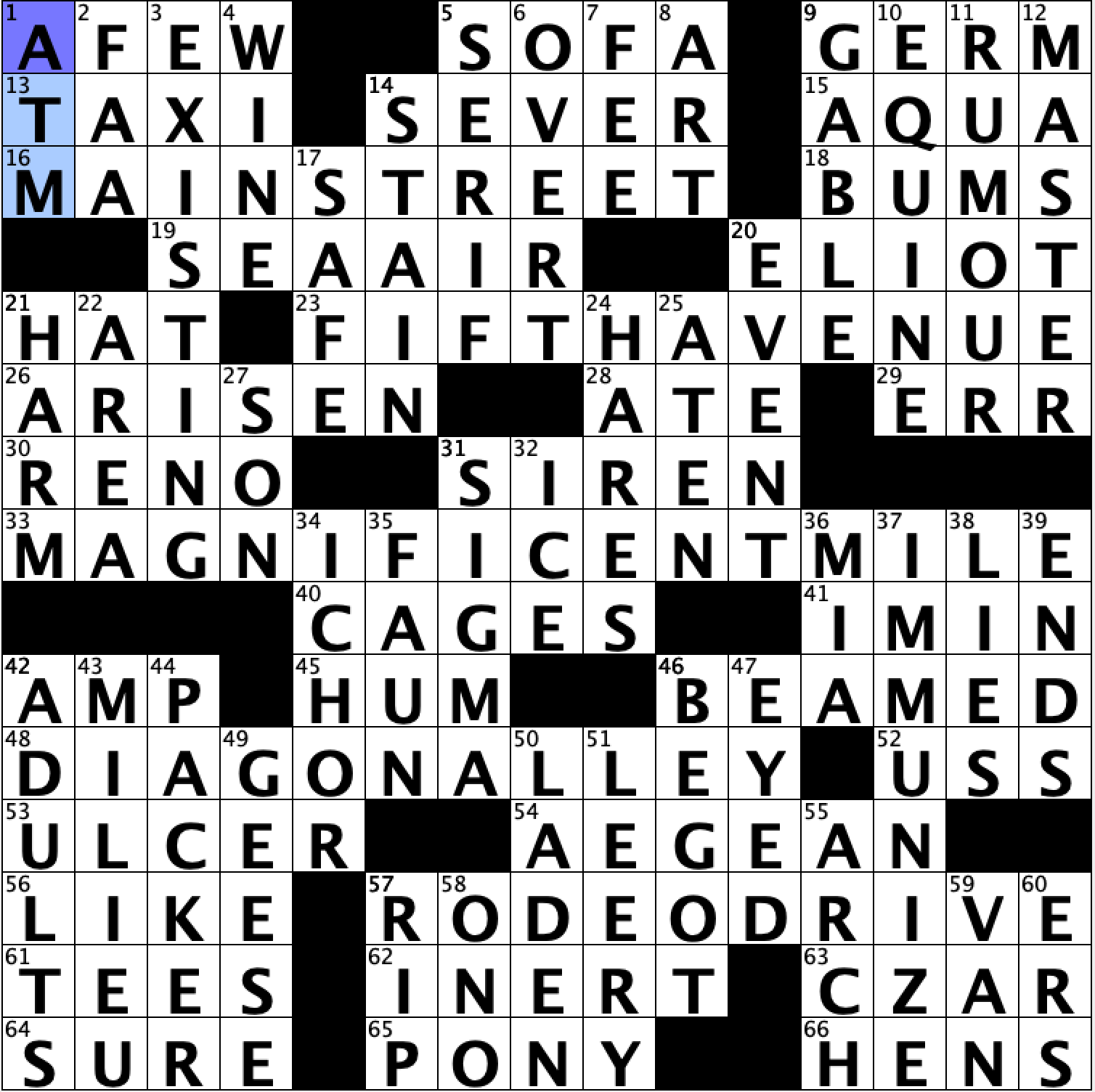 We have a straight forward theme today that is livened up by consistency in cluing and a well-constructed grid. Each answer is a famed shopping street. I loved the outlier of DIAGON ALLEY as the only fictional street. I wasn’t expecting to come across it after passing the other themers and it made me ecstatic to see. I am not always a fan of one themer being different than the others, but this made me smile so much I had to love it.

As far the fill, really strong set here – not much crosswordese at all and fun to follow around the grid – high value letters too without sacrificing smoothness. I also enjoyed the menagerie in this puzzle with a PONY, HENS, GEESE, HARES. Clue of the day for me was for ULCER [Malady that anagrams to “cruel”] and I spent too much time with LYFT where TAXI [Uber alternative].

I believe this is a debut for Chelsea Maude Avirett and I cannot wait to see more! 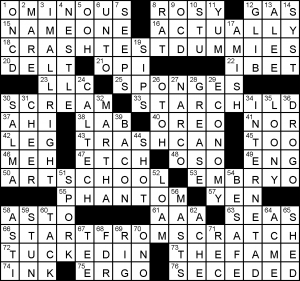 STARTFROMSCRATCH is the plus-sized revealer today, as we get yet another scrambled letters theme. All the scrambled letters are at the START today, and the chunk is longer than usual, being six letters in length. What is offbeat is that the string is SCRATH not SCRATCH. Weird flex, but okay. (CRASHT)ESTDUMMIES is a good spanning entry, with (TRASHC)AN and (ARTSCH)OOL more functional. STARCHILD seems to have a lot of meanings, but none stand out much; the puzzle went for [Extraordinary little one, in folklore]. I’m not sure what folklore this is. The legend of Paul Stanley? All I can find with Google searches is things about changelings… 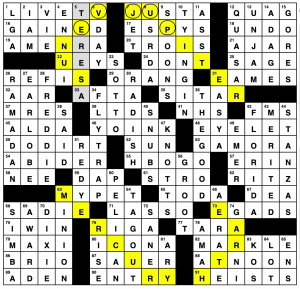 We’ve got a guest puzzle from Juliana Tringali Golden as today’s AVCX, and it’s a theme that’s all about circled squares in the grid.  My PUZ file was missing most of those, so I’ve highlighted them in the screenshot to the right.

We’ve got the SUN in the center of the puzzle (52A, “Body at one of the foci of some elliptical orbits”), and a few groups of objects orbiting that SUN in the circled squares – MERCURY, VENUS, EARTH, and JUPITER all appear in symmetrical sets of circled squares.  It’s a cute concept for a grid!

While I like the basic idea here, and some of the other fill within the grid (STANZAS, YOINK, PELICAN), there’s also a LOT of abbreviation/fill-in-the-blank multi-word running throughout (“That was JUST A dream”, KOS, ENS, FMS, “I AM Woman”), a few clues I disagreed with (You can stream a lot of LIVE TV! Almost every cable channel has an Apple TV or phone app with a LIVE option!) that made for a frustrating solve at times.

One final note inspired by today’s puzzle, and then it’s time for some ICONA Pop: please go read Caity Weaver’s look at the Instagram stats for the Windsors and Sussexes (including Meghan MARKLE).  It is bonkers in the best way.