We all need a little guidance from time to time, right? This puzzle seeks help from a higher power (Mike Shenk?) with the revealer GIVE ME A SIGN (62a, [Entreaty for divine guidance, answered by each circled word]). The other theme answers have road sign words hidden in common phrases. 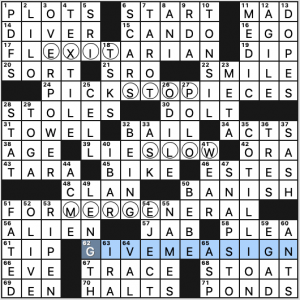 Despite my last little nit there, I enjoyed this theme. There aren’t that many single-word road signs, so this feels like an exhaustive set (if you can come up with something for DETOUR and YIELD, I’d like to see it).

COTILLION is a fun bit of long fill. OVERPOWER is less fun but still solid. Other highlights include TEXTILE, TONSIL, and CAN-DO. I did not know ODILE [Role danced in black]. I’ve probably seen it before but had conveniently forgotten it. It refers to the villainous role in Tchaikovsky’s Swan Lake. 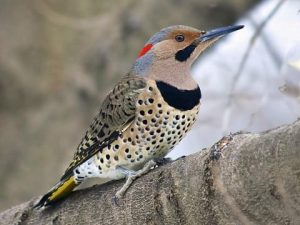 After last week’s multi-state grid with 16 possible answers, this week’s Thursday NYT from Zhouqin Burnikel is a little more straightforward.  The revealer at 56D clues “‘Enough!,’ in Mexico…or a hint to 11 answers in this puzzle”.  That’d be NO MAS, and indeed, 11 answers are missing their MAs, not that you can tell from looking at the grid by itself: 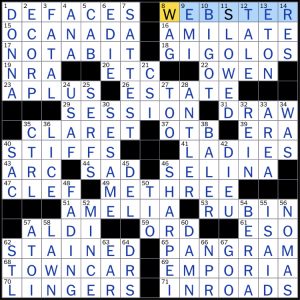 There’s a few bits of fill I didn’t love here – the (admittedly) redundant SAT TEST, NOT A BIT clued as “0%” – but this is a pretty solid grid overall, and I enjoyed the theme.

What’s your favorite PANGRAM?  Mine is “Sphinx of black quartz, judge my vow!”

A puzzle best solved at night.

Right over the plate today. I did momentarily wonder if BROKE EVEN was part of the theme. Doesn’t seem to work, and its symmetrical partner suggests they’re just along for the ride.

Also, how late am I to the party that I didn’t know OREOs had an annual mystery flavor? OOh… it’s a contest too! Guess the flavor! Last year’s winner won $50,000 after correctly guessing “Churro.” I’ll be on the lookout in 2020!

No frills puzzle here with a very simple theme. Smooth fill all around. Great puzzle to hook potential solvers! 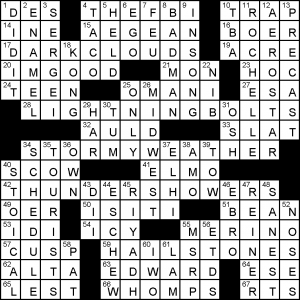 Today we have a pretty straightforward theme. STORMYWEATHER is clued as the song and four other phenomena associated with storms are listed: DARKCLOUDS, LIGHTNINGBOLTS, THUNDERSHOWERS, and HAILSTONES. All four clues feature a snowclone-like construction with some form of [They’re ___-ous]. Partly, this is to make the clues less obvious, as STORMYWEATHER gives a lot away. I feel like this style of clue may be somewhat polarising for solvers? Some might enjoy the wordplay, but others may find it annoying and cutesy?

I liked [Ones seeing things] for TOURISTS – short, snappy wordplay! On the other hand, why are people using STOICAL when STOIC means the same thing?

The Fireball has not joined the crossword Women’s March. I liked this puzzle anyway.

The theme answers appear to be random wacky phrases until you literally look the other way. They make sense backwards. 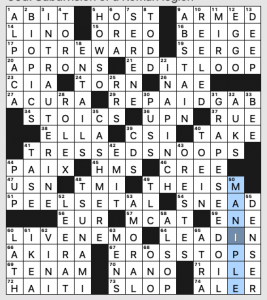 That’s a lot of theme material – it’s a 15×17, so there’s extra room. The fill doesn’t suffer overly much – nothing that annoyed me while I was solving. A really good puzzle.

What I didn’t know before I did this puzzle: that ELLA Fitzgerald won a Lifetime Grammy the year after Duke Ellington, and I’d never heard of Vantablack. Turns out it’s one of the darkest substances known. VANTA is an acronym for vertically aligned NANOtube arrays. According to Wikipedia, light bounces around the tubes and thus does not escape, so it’s very very dark.