Greetings, Friday solvers! I’ll bet many (most?) of you are fans of meta contest puzzles like Matt Gaffney’s Weekly Crossword Contest. The MGWCC puzzles are free to non-subscribers for the month of March, for the puzzles released on the Fridays from the 6th through the 27th. Visit Matt’s Patreon page to sign up for the puzzles, and if you are so inclined, stay on afterwards as a Patreon patron of Matt’s cruciverbal arts. (You can cancel by March 31 and you won’t be charged … but also won’t have access to subsequent MGWCCs.) 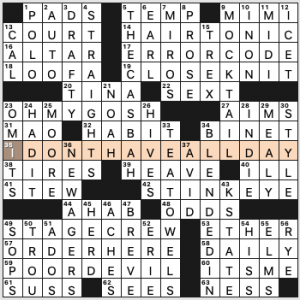 Fave fill: CLOSE-KNIT, “I DON’T HAVE ALL DAY,” STINK-EYE, MOCKTAIL, and TEA TOWELS. Current mood: Irritated at all the public restrooms that have only air dryers, when cloth or paper towels help kill germs after hand washing. Should I carry a TEA TOWEL everywhere I go?

Ahh, a Weekend Crossword from Patrick Berry. Such a lovely way to just slide into the weekend, coasting through another of Berry’s signature, faultlessly clean themeless constructions. 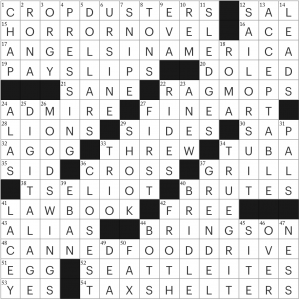 This one featured the really strong 15 ANGELS IN AMERICA in the N and and the somewhat less exciting CANNED FOOD DRIVE in the S, although the latter was saved from “meh”ness by the clue (“Charitable effort that involves raiding the pantry”).

The long stacks of 11s right above/below those 15s are also super solid and impressive. We have CROP DUSTERS / HORROR NOVEL in the NW and SEATTLEITES / TAX SHELTERS in the SE. Side story: I used to live in the Mississippi Delta surrounded by corn fields, so the NW really brought back some memories; a bunch of teachers living in the middle of corn fields with no neighbors for miles often felt like the set up for a HORROR NOVEL, and my housemates and I would regular get dive-bombed by CROP DUSTERS. Below is a picture taken from my Mississippi driveway. Anyways, this lovely puzzle! I didn’t know Seattle was called the Emerald City, so on 52-A I tried for an embarrassingly long time to fit MUNCHKINS into 11 letters. 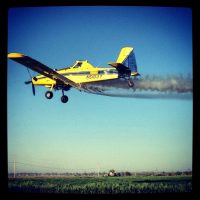 We also have some great long downs in the NE/SW with SAILOR SUIT / ACCEPTABLE and DIGITAL AGE / MOOD SWINGS. These last two had fantastic clues: “Computer time?” and “You won’t be happy with them for long,” which is both true and a nice bit of misdirection! Did Disney ever explain why Donald Duck wears a SAILOR SUIT? I never understood that. Is he in the Navy? Is he cosplaying Sailor Moon? Does he just enjoy boating? The people want answers!

One more personal story that this puzzle brought up for me and then I swear I’m done: one year, when my youngest brother was still in high school, my mom told him he needed to read 6 chapters of Beowulf before Thanksgiving dinner because it was assigned over the break. He spent the entire afternoon in his room reading, and then at dinner she asked him what happened in those six chapters. He responded, “I have no idea, something about GRENDEL,” and when we asked how he could possibly not know what he had read, he replied, like it was the most obvious thing in the world, “Well I wasn’t reading for comprehension!” and to this day he has not lived it down. GRENDEL!

Overall, another practically perfect themeless execution from Patrick Berry! I will say, having reviewed both this one and the NYT, that I preferred the NYT’s themeless today because it felt more lively– there is nothing at all wrong with this puzzle, but Caitlin Reid’s puzzle just had more personality and sparkle, in my view. Lots of stars all around today!

THEME: Words with OR in them clued as choices 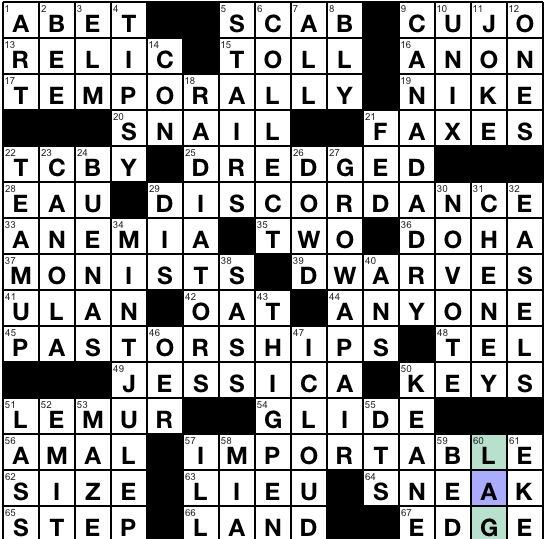 Excited to have extra Inkubator puzzles this month! Strong start today with an excellent debut puzzle! Here we have words that are comprised of wordORword clued as the choice between the words. The best answer of the bunch for me – from both a clue and answer stand point – goes to DISCORDANCE [Choice between a record and an event where you might hear one?].

Some fantastic medium and long fill throughout. CANADA DRY and MINT JULEP running down, connecting areas of the grid were really strong. TEAM UP, NO VOTE, and THIGPEN were also great additions here. And I loved seeing JESSICA Jones in this puzzle.

Clue of the day goes to GROW A PAIR [For some cis men, it might be an insult; for some trans women, like this puzzle’s constructor, it might be #goals].

In honor of the clue for STAIRS [Stationary escalator, as it were], here’s one of my all-time favorite jokes from Mitch Hedberg.

THEME: DIS is MISSING from the start of each theme answer 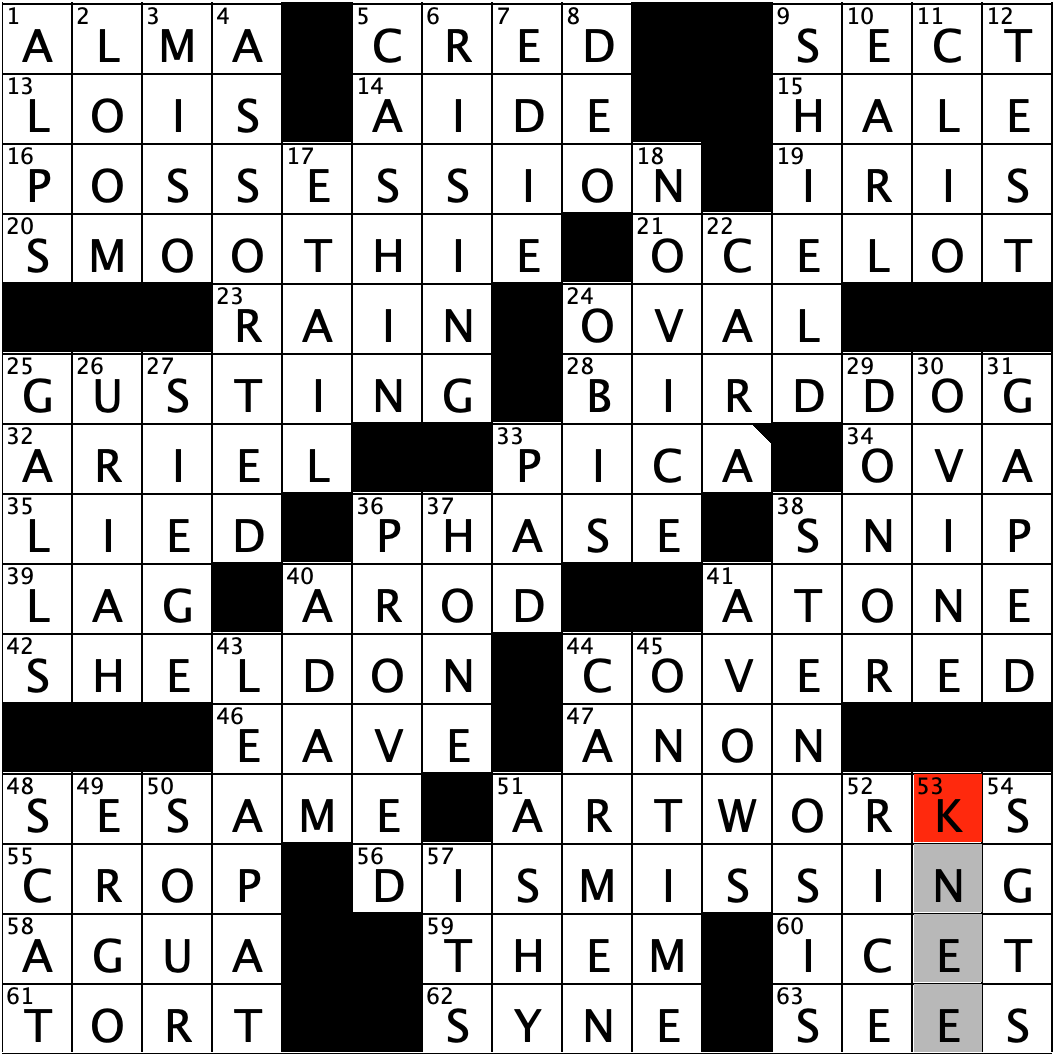 I really enjoyed in this puzzle – the literalness of that final theme answer is so perfect. When I figured out that the answers were missing the letters DIS I jumped down to the revealer and actually laughed when I realized it was DISMISSING. Truly perfect.

Overall the grid is super smooth. I was trying to pick a favorite area of the puzzle but the whole thing solves to beautifully it’s hard to pick one out.

Best clue goes to OVINE [Sheepish] – I love when a literal clue/answer combo like that can throw me off. Most accurate clue goes to ON TIME [Unlike many subways, sadly].

I can’t see the word OCELOT without thinking about Archer:

I think this another debut today! Wonderful work!

The LAT does not appear to be participating in the crossword Women’s March.

I’m heartsick about politics, confused and anxious about the looming pandemic and the lack of reliable information, and on call, so it’s possible I was simply not in a mood to enjoy this puzzle. It may not be the puzzle’s fault that I found it not particularly fun.

Each theme answer is a phrase containing an S, clued as a possessive. 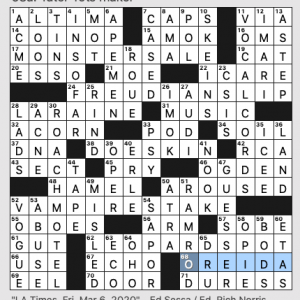 The theme is consistent and mostly solid, and also a bit easier than I expect Friday puzzles to be.

What I didn’t know before I did this puzzle: there’s not much movie, TV, or video game trivia in this puzzle, so I got nothing.