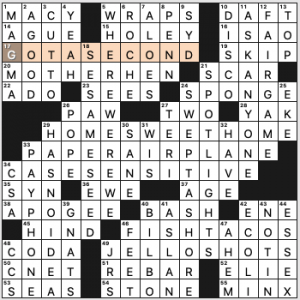 It’s late, let’s get right into it.

Fave fill: “GOT A SECOND?”, MOTHER HEN, HOME SWEET HOME, PAPER AIRPLANE, CASE-SENSITIVE, FISH TACOS and JELL-O SHOTS, “WHERE WERE WE?”, and “ASK ANYONE.” Oh, and FAIR GAME.

There’s a lot of terrific long fill, but some of the short stuff isn’t pulling its weight. AGUE, ISAO, SYN., -ENE, I’m looking at you.

Is the concept of CSA shares, community-supported agriculture, getting subscription boxes of fresh produce, really too obscure for the NYT crossword and other newspaper puzzles? Cruciverb tells me that only Matt Jones of Jonesin’ has alluded to the vegetable-oriented CSA. Whereas the NYT sticks with 34d. [Civil War inits.], for the pro-slavery side.

10d. [What the Copacabana becomes at the end of “Copacabana”], DISCO. Hey! The first 20 seconds or so of the lyrics would be good for your 20-second hand-washing soundtrack. “Her name was Lola, she was a showgirl / With yellow feathers in her hair and a dress cut down to there / She would merengue and do the cha-cha / And while she tried to be a star Tony always tended bar/ Across the crowded floor, they worked from eight til four / They were young and they had each other / Who could ask for more? / At the Copa, Copacabana …” You can even shimmy while washing your hands to “Copacabana.” I mean, how could you not? 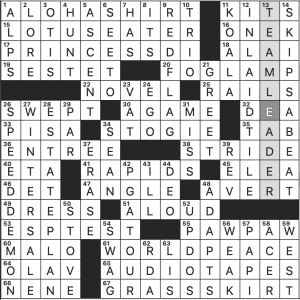 Not too bad of a time this week, but a very fun puzzle. The stacked tens are all great, and there is even a minor whisper of a theme (see below). I count 12 10-letter entries all together, but other than that nothing longer than 7. Interesting, but the fill seems to be fairly smooth. All in all, I’ll take it! 4.2 stars today.

I will stop there! My next LAT review is Tuesday. Until then! 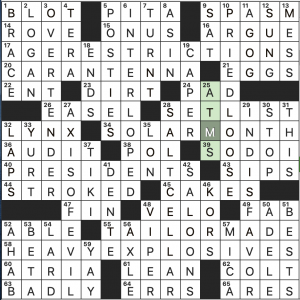 Tough Stumper this week, but I have struggled mightily in the past with Greg Johnson puzzles, but this one wasn’t quite as bad. I am happy with a 19+ minute solve time is what I am trying to say! This was a beast at times, but I think Greg may be one of the best at clueing these Stumpers. I know Stan has a lot to say about the final versions, but you can definitely tell different styles that the constructors have. It may not be readily evident, but this puzzle is chock full of 10-letter words. They are interlaced all over the grid instead of in stacks, as you might usually see that many in a themeless grid. Great job of construction, but Greg is one of the good ones! 4.4 stars for this one.

Some highlights, slightly skewed toward some of the longer answers: 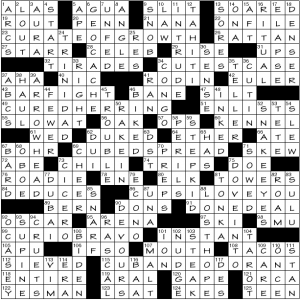 In the time-honored tradition of adding letters for wackiness, the abbreviation for the element copper—CU—is appended to the beginnings of phrases. Cu is of course from the Latin cuprum, but I’ve only just learned (or perhaps relearned) that it derives from Greek cyprium, meaning literally “metal from Cyprus”. 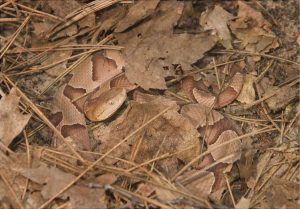 The North American copperhead is Agkistrodon contortrix (Greek ancistro “hooked” + odon “tooth” and Latin contortus “twisted”). Surely it can’t be coincidental that the longest downs—spanning the center—are ARROWHEAD and SNAKEEYES? 39d [One given the shaft?], 52d [Loser in a casino]

Not part of the theme: 36d [Annoy a fellow motorist, perhaps] CUT IN (tin). I would have preferred that this distracting entry had been avoided.

And so I’ll perversely end on that low note, despite this being a solid, fine crossword.

Some might say this puzzle is cheesy. I’d have to agree.

THEME: Words/phrases that begin with a type of cheese.

Loved the revealer on this one. Unfortunately I jumped to the bottom early, and I got the revealer too quickly, so I immediately knew what I’d be looking for. I think I would’ve enjoyed an aha moment more by going through north to south. Doubt I would’ve seen the connection between the themers.

My favorite theme answer was FETAL MONITORS simply because FETA is’t heard and is buried within another word. It’s also the only two-word phrase of the bunch, which I think makes for snappier theme answers anyway.

I didn’t know ROMA was a type of cheese. Is that short for ROMAno? JACK also seems a bit slangy in comparison with FETA and EDAM.

As a side note, I think I can live off of cheese platters and be a happy fella.