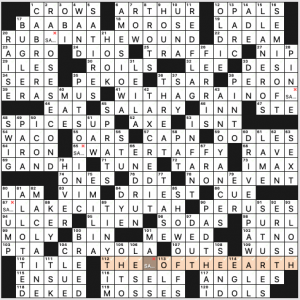 What’s shaking? Salt. The theme is a two-pronged rebus: SALT in the Acrosses and the letters NaCl going Down. (And I don’t know what the .puz file accepts as a correct rebus square because it marked my SALTs wrong.)

I’m not a big fan of sodium chloride but it has its uses, such as in crosswords!

We were teased last week when Evan told us all he would have a guest constructor at the helm today. I had a sneaking suspicion it would likely be in celebration of International Women’s Day. And I thought of a few top-notch constructors Evan might invite to his platform on such an occasion. I was correct. One of the best constructors out there is Zhouqin “C.C.” Burnikel. It was a pleasure to see her name appear in the byline before diving in. 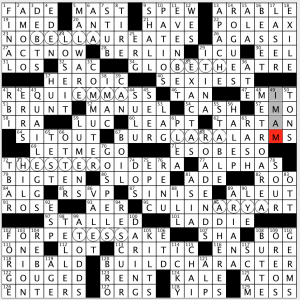 THEME: Female characters in literature are found within common phrases.

That last revealer, BUILD  CHARACTER, caught me off-guard. If any puzzle doesn’t need a revealer, it’s this one for sure! Title and circled characters say it all. Also, I don’t see how the starred answers really “build character.” They have characters included already! But I digress. No need to take away from a joyful and celebratory puzzle.

I appreciate how C.C. focused solely on very “in-language” phrases where the hidden character bridges more than one of the words in the phrase. Also, the characters themselves are all very notable, even Lara whom I know nothing about from the book I haven’t read. For a hot second, I thought that all the authors were going to be women as well as I solved from North to South. I mean, we hit the first three! While C.C. may have attempted this, asking for that element as well would’ve brought us to a land of obscurity if it were possible at all.

Ironically enough, there are plenty of men hanging around. John Legend showed up as the SEXIEST of all. Gary SINISE and WES Anderson are two LADDIEs that stopped by to say Hello! while Paul Anka sang ESO BESO in the background. But we’ve also got ANA de Armas, ARIANA Grande, and the HEROIC Wonder Woman at the party. Simona HALEP was a new name for me, though its clearly a name I should know.

Smooth fill all around. The only nit I have is the clue for 113A [Opening night attendee] CRITIC. CRITICs typically attend preview performances and have done thorough research before posting their reviews after a show opens. You won’t see a CRITIC taking notes on opening night (in New York, anyway).

This was a delight and a treat. Thank you, Ms. Burnikel, and thanks to Evan as well for hosting.

It would be a crime not to solve this one today!

THEME: Theme entries end with words that go through the court process.

This is a lovely set of theme answers. Sometimes I kick myself for not stopping to smell the flowers along the way. I probably would’ve enjoyed this more had I taken a couple seconds to figure out the them mid-solve instead of post-solve. I really like that 1) The process goes in order (CHARGE, TRIAL, SENTENCE, APPEAL) and 2) The theme answers have nothing to do with the legal sense of the terms whatsoever.

ICE BREAKER was nice to see in the fill. Also, I’m a sucker for random facts, and Universal loves to include those. The one today was 48D [Only word that’s a two-digit number backward] TEN. Never thought about that before!

Most of us in the US transitioned to daylight savings time last night (waves to people in AZ, HI and part of IN). I was on call last night, so losing an hour was A-OK with me. Robin makes it fun.

Each theme answer has lost an HR. 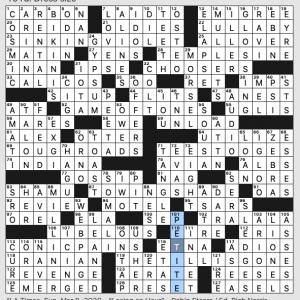 It’s a solid, consistent, and enjoyable theme. I didn’t realize until I wrote them all out that each themer has the HR removed from the same position in the word. Cool.

What I didn’t know before I did this puzzle: that LAID TO is sailor-speak for stopping the ship; that UGLI fruit is related to the tangelo; that there’s a ZEBRA named Marty in the Madagascar films; that ETNA is Greek for “I burn;” that OREM used be called Provo Bench.