The week of women at the NYT is over. This is a nice Monday offering which coincidentally shares a theme answer with Sunday’s brilliant puzzle. This one has units of weight in each theme answer; the weights go up as the answers move down in the puzzle. 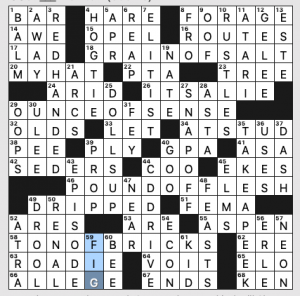 A solid, accessible Monday theme. I find it a little awkward that the theme answers don’t include the articles, which are all a standard part of the phrase, but at least none of them have the article. If some did and some didn’t, that would be really annoying.

I really liked the cluing in this puzzle! It was fresh without being too challenging for a Monday – at least as far as I can tell. I haven’t found a Monday challenging in nearly 50 years, so I may not be the best judge.

What I didn’t know before I did this puzzle: once again, I got nothing. I had a bunch for Sunday’s LAT, so it all evens out.

Each theme answer consists of two words and each word can precede TIME. Hence the revealer DOUBLE TIME (58a, [Holiday pay rate, perhaps, and a hint to what can follow each word of each starred answer]). 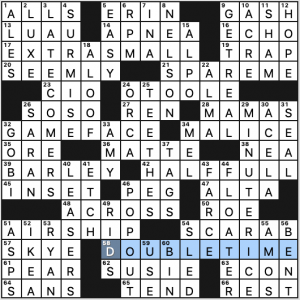 Despite that last one, I enjoyed this theme and this type of theme overall, especially when there are fun entries like SPARE ME and GAME FACE.

In keeping with the alacrity in the theme, our long fill feels theme-adjacent with MINUTE RICE and those slow-poke LATECOMERS. A fun touch. Other goodies: GET REAL, FLOATER, SCARAB, and SURMISE which looks like “sunrise” so it always gives me a positive vibe. And MALICE makes me think of the New Wave hit “Town Called Malice” (see below).

I’m not sure if it’s my own lack of coffee, the lingering effects of daylight savings, or the puzzle itself, but I didn’t get a whole lot of joy out of this solve. There are definitely some parts I liked (most of the long stuff), but today I found the sticky spots to be *particularly* sticky. 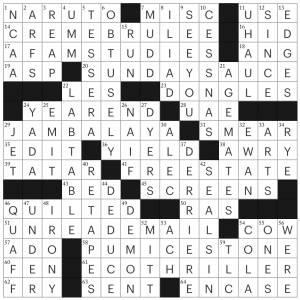 First, the stuff I liked: the long 11s in the NW and SE were all pretty solid, with the possible exception of ECO-THRILLER. I loved CREME BRULEE, AFAM STUDIES, and PUMICE STONE, but I am not a big fan of adding ECO- as a modifier. ECO-THRILLER (“Hair-raiser about rising sea levels, say”) is definitely a thing that googles, but it just doesn’t do much for me. UNREAD EMAIL is great (and probably a place where a parallel clue about hair-raising could be used— seeing a friend’s phone with 1,345,436 UNREAD EMAILs is the sort of thing that sends my heart rate through the roof).  I also liked JAMBALAYA and FREE STATE, although I have yet to correctly spell JAMBALAYA on a first attempt.

Now the bad news… For one, the word for an Italian grandma is spelled *Nonna,* with two Ns. I was trying to figure out what the wordplay was on that clue due to the dropped second N, and then got a little cranky when I realized it was just a typo/oversight and there was no wordplay (I realize that this is probably a problem very unique to me). And due to my aforementioned inability to spell JAMBALAYA (which I spelled wrong again in typing it out just now), I struggled with YADA crossing YEAR-END and LAB TABLE crossing BED. I suppose YADA is a “Blah alternative” in that either could be tripled to mean “and so on” or whatever, but since the tripling wasn’t hinted at in the clue, this was a major struggle for me. Similarly, I didn’t see how BED could be a 1-to-1 for “Lettuce, at times” until just now, when I realized you could have a BED *of* lettuce on which your other food rests. In this case I’m pretty sure that synapse’s delay in firing can be attributed to my lack of caffeine/DST sleep. 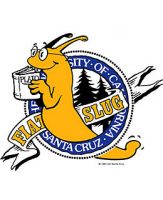 Overall, not my favorite New Yorker themeless, but a solid offering nonetheless from Kameron, whose byline we haven’t seen in a while from the New Yorker rotating roster. Kam: more puzzles please!

THEME: Hidden bands clued as though a song from the hidden band were being played by the longer-named group 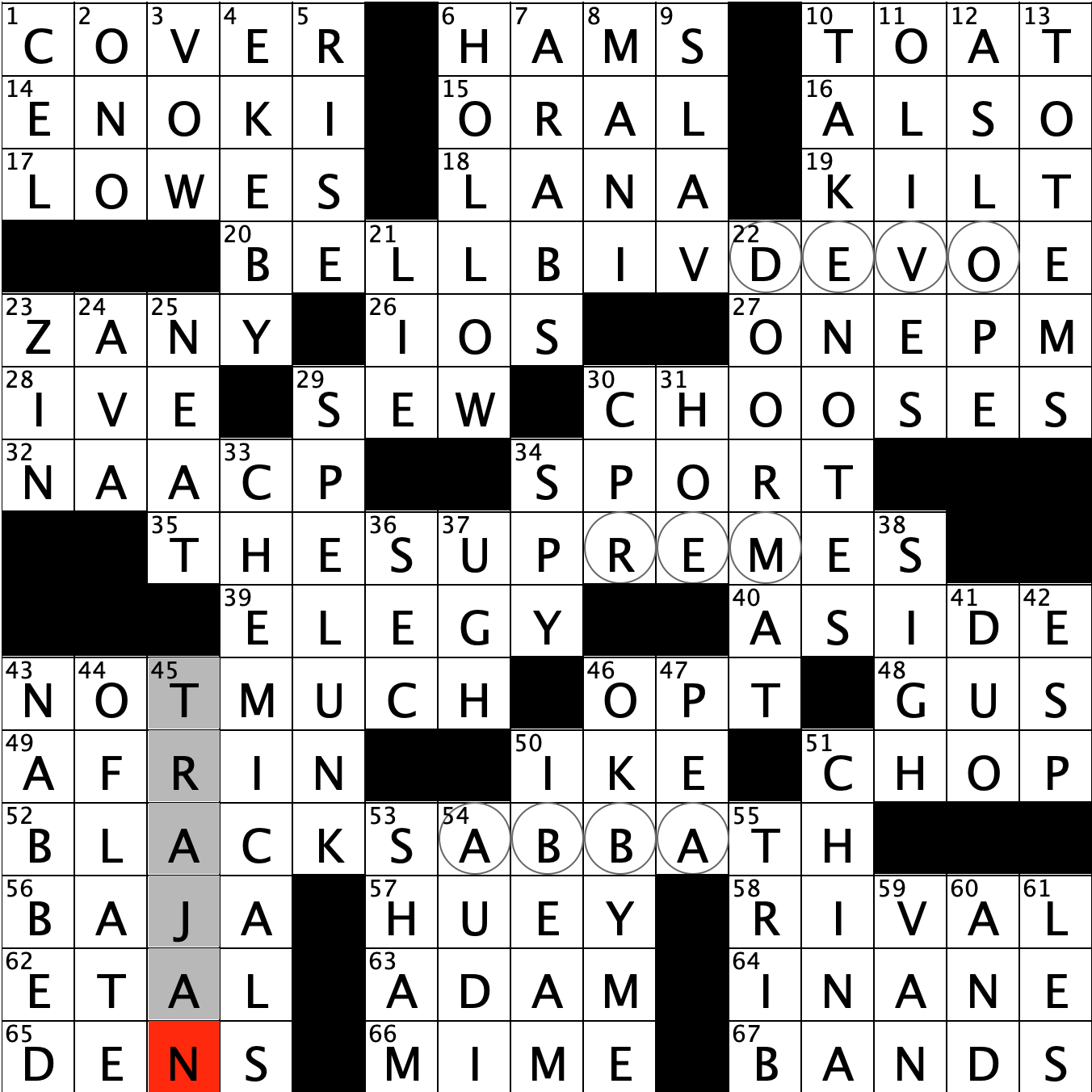 Beautifully done easy puzzle to start the week with. Really fun theme that pulls together two very different musical groups as COVER BANDS. I got that answer pretty early into the solve, so as soon as I came across the themers, I had an idea of what was going on. Made for a quick, and very entertaining solve. I think my favorite one to think about is probably THE SUPREMES singing “Losing My Religion” but really all three clues evoke thoughts of entertainingly absurd mash-ups.

Of course, I also had to find out if any of these artist combinations existed and the internet did not fail me. While I would’ve loved to see what BLACK SABBATH could do with Waterloo – this video doesn’t disappoint.

As far as fill goes, lots of fun here too. SPELUNK is a great word -and I can see the same unenthusiastic answering both OK BY ME and NOT MUCH in the same conversation. Other longer downs like TAKE NOTES, DOORMAT, and CHEMICALS helped to make this a really smooth solve.

Found my foothold in the SW and steadily circumnavigated the puzzle with only a couple hiccups.

And my favorite clue:

Not too many side-eye moments. TEN TO TEN seems bizarre (I wonder how many specific times are in BEQ’s word list!). ONE PM is there too! BOTNET was new to me, but I like it. 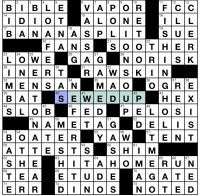 Each of the theme entries ends with a word – HOLE, SPLIT, TEAR, RUN – that can be SEWED UP. The revealer feels off to me, since it doesn’t say anything about the theme entries themselves, rather something that can be done to all of them. I would have preferred a revealer that either hinted at how those openings formed or maybe this didn’t need a revealer? Instead, maybe a fifth theme entry that ends with rip?

Random thoughts:
– Nancy PELOSI, SHE, and IMAN are the women in our grid today. Oh, and NEFERTITI, who was a nice bit of long fill to include! Is this the first puzzle in ages where at least half of the women in the puzzle (as small a number as that might be) are women of color?
– “Life of Pi” and “Game of Thrones” seem to be the most current references in this puzzle, though they clue more generic fill. We also have E-cigarettes, TSA, and Nancy PELOSI. Those last two might be the most recent in-grid fill references in this puzzle. That said, this puzzle legitimately could have been written a decade or more ago with slightly different cluing. That, to me, isn’t as exciting as a solver.