Title: “Surround Sound”
Prompt: The meta for this puzzle is a six-word line from a Jimmy Buffett song.
Answer: “Can’t you feel ’em circling, honey” from “Fins” 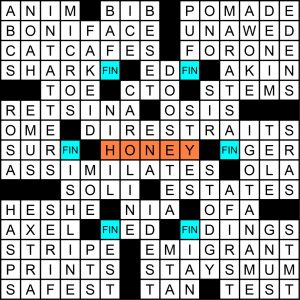 From the title and prompt my guess was that the contest answer would be from “Fins,” and discovering six rebus FINs in the grid confirmed that much. But which line would it be?

Slow solve because standard rebus early erasures. Nothing was fitting in the upper-left to start: Wanted LEGO for [Building blocks] at 1-D, but no crosses agreed (turned out to be ABCS), and also wanted HIS GRACE for 14-A, where I had ??????CE for [Popular papal appellation] which turned out to be BONIFACE.

Finally remembered my FINs theory and things started to pick up, with the first shark sighting at 19-A [One of six sighted in this puzzle] = SHARK(FIN), crossing 5-D [Eponym of the largest island in Canada] which was BAF(FIN).

Also adding to my time were evil clues like [Long shot on film] for NIA at 51-A and [It once meant nothing] for the Latin word for zero, NIHIL.

Finally found all the FINs, the most entertaining of which was MARAT SA(FIN) at 10-D [First Russian to be inducted into the International Tennis Hall of Fame]. That had been my first guess upon seeing the clue but of course didn’t fit before I’d picked up on the rebuses.

So which six-word line from the song are we looking at? Notice HONEY in the center of the grid, and the six sharks circling it. This yields contest answer “Can’t you feel ’em circling, honey,” which as of 30 minutes before deadline has been found by precisely 420 solvers (no joke), which is perfect for a Jimmy Buffett & the Coral Reefers meta.