March 2020 is the Crossword Women’s March, when many crossword venues are publishing only women for an entire month. Some venues have committed to only a week; they must have their reasons. The WSJ Contest constructors are all male, and unlike the regular WSJ puzzle schedule, it is not open to outside submissions. Thus I couldn’t be more delighted to see Joanne Sullivan’s byline for this week’s WSJ contest and I’d like to see her puzzles included in the rotation from here on out. Not expanding the roster seems like a missed opportunity not only to work toward inclusion and equity, but to publish puzzles by someone of unique talent and creativity. 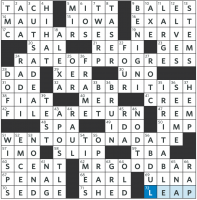 This week, Joanne challenges us to find a six-letter word. There appear to be six themers, so let’s start there:

I suspected there might be something hidden in the themers — I saw LEAR in FILE A RETURN and ABBR in ARAB BRITISH — but I couldn’t find a consistent set of somethings. A friend suggested that if I looked a little more closely at the themers, something might leap out at me. And looky there at that last across entry:

Each themer contains an animal that is known to LEAP — HARE, FROG, RABBIT, FLEA, TOAD, ROO (as in KANGA-). Let’s say that each of these leaping animals is a hopper, hence the title — and in the hopper is an extra letter. Those letters spell out, in order, SPRING, which is a six-letter word, a synonym for LEAP, and our answer. Fun!!!

This entry was posted in Contests and tagged Joanne Sullivan. Bookmark the permalink.