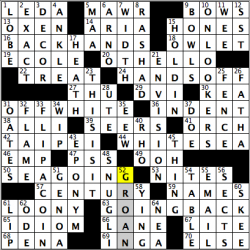 Hello there! Hope you’re all doing well today and also hope that you experienced near springlike temperatures like what surrounded me all day!

Lovely fill with the non-themed entries, especially the clue-answer pairing to FLIP A COIN, as I got a little misled as I thought it was referencing deciding what to do with money for a while (33D: [Decide with money]). I’m guessing the clue to GROAN is meant to refer to the sound solvers make when we understand a clever attempt at a clue and react to it (52D: [Music to a crossword constructor’s ears]). Fortunately enough, Liz’s puzzles do not elicit too many groans, at least I’m safe in assuming that. The same thing cannot be said about the reaction of many of my classmates during our college commencement, when Phylicia RASHAD was our speaker and, being that it was Mother’s Day, talked about a mother’s love at the beginning of her speech (8D: [“Creed II” actress Phylicia]). Well, I, like many others, thought that that was the beginning of her speech, but it turned out, pretty much, to be the whole speech. I was OK with it, but, almost 20 years later, some of my classmates still mention it and grumble about it. Hey, we all got your sheepskins, so let’s move on!

“Sports will make you smarter” moment of the day: OATES (31D: [“Blonde” author Joyce Carol Oates]) – One of the all-time great playmakers in the history of the National Hockey League, 2012 Hockey Hall of Fame inductee Adam Oates is one of just 13 player in league history with over 1,000 assists in a career, ending his time in the league with 1,079. Oates is most known for his time during the 1990s with the Boston Bruins, yet his most productive years came in the 1990 and 1991 seasons while teamed up with goal-scoring great Brett Hull. Hull scored 72 goals in 1990 and an astounding 86 in 1991, with a slew of those tallies assisted by Oates. By the way, guess what the nickname of the pairing of those two hockey greats was when they were playing at the Gateway to the West. 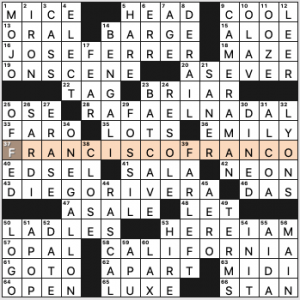 A central 13, FRANCISCO GOYA, could have replaced the dictator. Or a non-Francisco 15 such as Barbara Cartland, Mandrell or Stanwyck, or Anita Sarkeesian. Or rework the other theme lengths when getting rid of Franco. I mean, RAFAEL NADAL isn’t a great themer because San Rafael is quite a bit smaller than all the other San/Santa cities (I sure don’t know where San Rafael is located). Heck, just use some alternate 11s in place of the two men in the 11s as published, and expand the “saintly” vibe from the unspoken SAN to include SANTA. Nothing in the revealer clue dictates that the theme needs to be all dudes. So many possibilities! Barbara Bush or Eden, Rosa Bonheur, Ana Gasteyer or Ivanovic, Clara Barton, or Monica Seles (11). Or with different word lengths, California’s own Barbara Boxer (12) or Rosa Parks (9) could be included. Actress Ana de Armas (10) or political commentator Ana Navarro could replace the unknown-to-many Ferrer.  The revealer also doesn’t demand that the names all belong to people with Spanish ancestry, either. Sure, it feels like a “tighter” set with four men with Spanish names, but it comes at a cost.

Worst pile-up: The left middle, where -OSE FARO EDSEL crosses SARDI. Really? None of that is an asset to a grid. 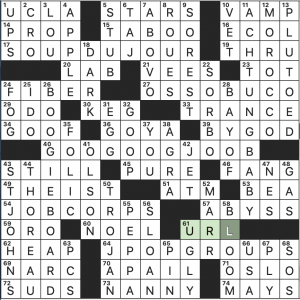 It again took me a minute to see what was going on here, even though the flavortext is quite plain! It states “every capital letter in the theme has curves”. That doesn’t apply to the puzzle’s title, but rather to the theme entries. The capital letters that have curves are B, C, D, G, J, O, P, Q, R, S, & U. All the the themers are made from those letters and only those. Here they are:

I think the stars are in because there are longer entries in the grid (see 11D and 26D) than what the theme entries are, which are typically themselves the longest in the grid. Hopefully that doesn’t bother your puzzle esthetics; I didn’t even really notice until I started analyzing the puzzle more closely. As is usually the case with a Jonesin’ theme, I am trying to come up with other answers, and I am too tired to brainstorm any more! 4.3 stars from me today. 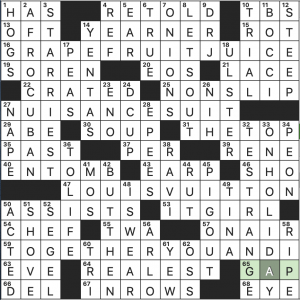 Clever theme idea, although there are a few songs with the relevant key words in it, but most of them aren’t 15 letters!

Do you have a similar song going through your mind? I do! I was thinking of the song You and I by Eddie Rabbitt and Crystal Gayle. But I am old, just like that song! I am not familiar with this one, but I also don’t listen to as much country music as I used to. Yes, I USED to! The video for Dolly’s song is below. 4.3 stars for this one.

Happy Women’s March, as we continue on with a month (and hopefully much more!) of fantastic puzzles by women constructors. Let’s jump into today’s WSJ by Barbara Lin: 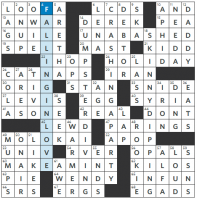 I liked this one! Each of our four themers is certainly “On the Decline” in two senses: each goes down (instead of the typical across) and features a word meaning decline: FALLING, CRASHING, DIVING, and DIPPING. I also appreciated that, of the themers, two had the decline word first and two had it last. Those little bits of elegance matter and make the puzzle feel all the more polished. The themers all felt strong, and the clues for FALLING IN LOVE and SKINNY DIPPING were especially fun.

Random thoughts:
– In addition to our constructor, the women featured in the puzzle include “The Secret Life of Bees” author Sue Monk KIDD, WENDY from “Peter Pan,” mom kissing your OWIE, ARETHA Franklin, “Girls” creator and star LENA Dunham, Mariah Carey, and LASS.
– I appreciated the representation of people of color at the top of the grid, with “The Jeffersons”, ARETHA, Mariah Carey, and Jamaican SKA music.