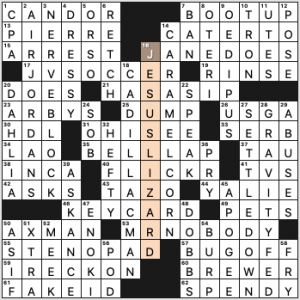 This puzzle is both an upper and a downer. It’s a downer because the bulk of the long showpiece entries are Downs. It’s an upper because so many of these long answers are wonderful to encounter in a crossword. On my faves list, we have a KEYCARD, AIR JORDANS, a NERVE BLOCK, CARAMEL CORN!!, the JESUS LIZARD!!!, and “SETTLE DOWN!” as an imperative. Trade names FLICKR and TAZO, “BUG OFF!”, FAKE ID, SPENDY (a term I picked up from a friend who adopted it in Minnesota or Iowa), a pretty DAHLIA, and ASKANCE (not far behind akimbo on the list of “a-” words I love) also please me.

Anyone else initially fill in JANES DOE as the plural at 16a? No? Just me?

In the debit column, I don’t love HAS A SIP, OH I SEE, MR NOBODY (is that a thing?), and some of the short fill. The fun long fill escorted me through the solve, though, and kept the puzzle enjoyable.

THEME: Things that are spiked 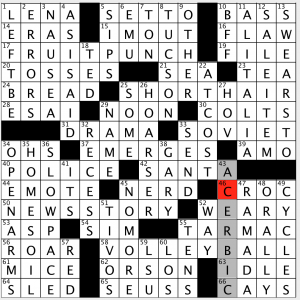 Cute, consistent theme. I like it when themes are easy to grok and explain to novice solvers, like this one is. The SW corner really feels like it wants to shine with OPEN ARMS, HOME SOIL, and SLOW PACE, but two of those feel off to me. Namely HOME SOIL clued as a sports advantage. I think HOME TURF. Good luck googling HOME SOIL without finding reference to the name of a Star Trek episode (trying to google it without star trek didn’t help much either). SLOW PACE doesn’t strike me as a stand alone phrase either. I liked the opposite corner better with AIR ITALIA, SALE ITEM, and SWEARS TO. 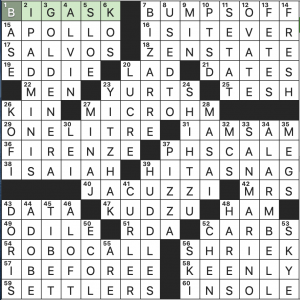 Smooth solving. And just as I was rounding into ACPT solving shape, the coronavirus has knocked it out! But that is probably a good thing, as this virus is sweeping around the world like wildfire, and there could possibly be long range implications if something isn’t done, so hopefully we can do the ACPT later in the year.

I enjoy Debbie’s puzzles, and ironically I was hoping to meet her at her first ACPT next week! That too will have to wait. In the meantime, I enjoyed this 72-worder. Lots of fun and interesting answers in here. Which is what we want! 4.3 stars today.

I guess I will have to find some puzzles to occupy me while I am holed up on weekends since everything is cancelled and there are virtually no sports on! Other than the lack of sports, sounds like a great excuse to do puzzles! 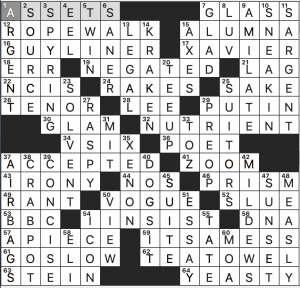 Definitely stumped this week. I found this wildly difficult. Even when I thought I had a toehold somewhere, I still hit roadblocks. I am finding that I need TOTAL concentration to finish one of these puzzles anymore; that is why I mention noise-cancelling headphones every so often. They help a lot! (Drooling over some Skullcandy ANC Crushers at the moment; but they are $300+!) Anyway, Brad has made yet another stellar puzzle, and it was a blast to solve. I will miss seeing him next week! 4.5 stars this week.

There is a new Panda Magazine coming out today, so I will be busy. Have a great weekend, even if you’re holed up inside! 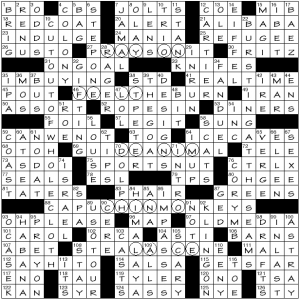 Brief, tardy write-up. These things are not unrelated.

Theme is types of fabric appearing sequentially but not entirely contiguously within longer phrases.

Additionally there are two long downs which function as revealers:

Might have been better to just include those phrases without trying to shoehorn them into the role of revealer.

Pattern in the grid’s left–right symmetry looks to me a bit like a spider, which would be apt, as Arachne (their namesake) was a weaver in Greek myth.