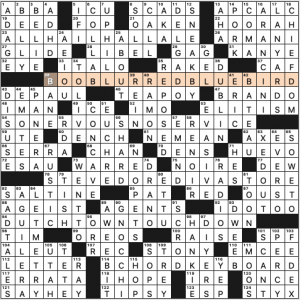 “Gets Low” is a spoonerism of “let’s go,” and the theme entries are spoonerism pairs like that, but combined into one long phrase (with the real half sometimes first and sometimes last) and clued accordingly:

Kinda fun theme. And with just six themers, there’s space for some good 7s and 8s in the fill. I like GNOCCHI and ARANCINI (these are words spoken in my house this evening), COLLAB, AGUILERA, SOWETO, DEPAUL, and DIYERS.

Four stars from me. Wash your hands, and practice good social distancing! 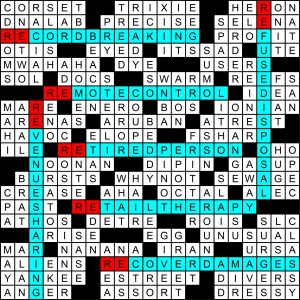 Seven phrases are “re”-imagined as e-mail reply headings beginning with the preposition “re”:

21-A: [Subject line for a reply email about a defective charger?] = RE: CORD-BREAKING

89-A: [… about specialized rehabilitation for a dog?] = RE: TAIL THERAPY. Good since the meanings of “retail” and “tail” are so different, not so good since it invokes an injured animal. But then not so bad since it’s just the tail that’s injured and the dog is getting help for it. I’m overthinking this.

15-D: [… about disposing of an old electrical part?] = RE: FUSE DISPOSAL. I only know this as a “garbage disposal.” OK, looks like it’s referencing just general disposal of waste, but doesn’t Google that well and seems more of a British thing. Base phrases in a pun puzzle like this should really be rock-solid since uncertainty over what’s being punned on tends to kill the funny. You don’t want to kill the funny.

53-D: [… about allowing two events to occur in the same place?] = RE: VENUE SHARING. I like this one since “venue sharing” sounds both funny and like a real thing. Maybe it is.

So I like the twist here of using the “re” as an e-mail heading. Haven’t seen it before and it makes the theme idea logical instead of arbitrary. The execution was decent, but with so many “re-” words available it seems like there could’ve been a couple of killer themers in there, entries where both 1) the meaning changes drastically with the removal of the “re” and 2) where the result is hilarious. Still, a perfectly good theme as is.

I was surprised to learn that this grid had 144 entries since it looks wider-opener than that at first glance. I would’ve guessed 140. I know we’re not supposed to obsess about stuff like that, and look at all the nice sixes and sevens she worked in there: MWAHAHA (that whole northwest corner is intricate and clever), BEACON, WHY NOT?, FRITTER, CLASSY and DRESSY meeting at the Y, AT REST, YANKEE, ACROSS (as a down!), UNUSUAL, PRECISE, PROFIT, and STEAL IN.

110-A: [Circle calculation] = AREA. It may still be Pi Day when you read these words.

57-D [Color with no common rhymes] = ORANGE. All over America today, solvers are confidently writing SILVER or PURPLE in those boxes. 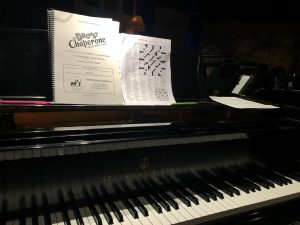 I solved this puzzle the same way I solved Evan’s puzzles when his site, Devil Cross, was in its infancy: at a piano while waiting to accompany a high school musical. Granted, I did find it bizarre that Broadway is closed, but a local high school was still performing. That decision was above my pay grade.

Standard, easy puzzle with a familiar theme. I thought for sure with a title like Name Dropping names would be “dropped” to the answer below a themer or something like that. Nope. HOWEVER, names are dropped in a sense. Did you catch that there are no other names anywhere in the fill? That’s quite the feat. Actually, I don’t think I’ve ever solved a crossword that didn’t feature names in the fill. So… cool! And the fill didn’t suffer all that much, though I’m sure it was a burden for Evan. Okay, I coulda done without the IMARET/MAGE crossing, but at least there was that cute clue for MAGE about anagramming a word in the clue (“game”).

Because I solved on the West side of the puzzle and headed down I uncovered GRACE SLICK, FAITH HILL, and PATTY DUKE first. I thought for sure we were still keeping with the theme of women’s month. Then TIGER WOODS peaked out and I was corrected.

GAME CLUES OF THE WEEK:

Hope your week ahead brings a sense of solace! 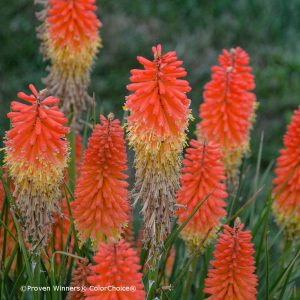 That’s a lot of theme space! It’s pulled off nicely and even has SNACK BARS and STRAW BALE as longer answers, though I think of them as HAY BALEs (they’re everywhere around where I live, and we’ve never called them STRAW BALEs!). RED HOT POKER seems a bit contrived with the double adjective, and google seems to agree that it’s not really a thing in the context of the clue. It is, however, a flower that I’m sure you’ve seen before! I think it would’ve been more fun to clue it like that! Seems less contrived and a fun fact!

Simple, consistent theme that makes it difficult to carp about anything. I’ve said it before, but I like it when Universal sticks to the types of themes that are easy to explain to a solver at any level.

For the second Sunday in a row, the LAT is by a woman! I support this trend.

The theme answers look like they should rhyme, but they don’t, because English is weird. 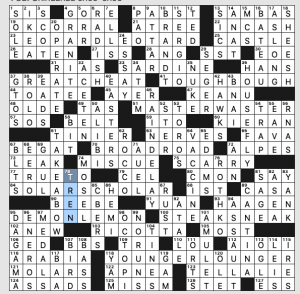 It’s a fun theme. The eye rhymes make it a pretty easy puzzle; once you get one word in a theme answer, you can fill in the end of the other word. In a Sunday puzzle, that’s feature for most people, not a bug. I wonder how many people will start doing crosswords while they’re practicing social distancing.

What I didn’t know before I did this puzzle: see above re: Don BEEBE. I also did not know that the actual fight at the OK CORRAL took place in 1881, and I didn’t know that a BATEAU was a word in English for “flat-bottomed boat.” I did know the French word. See above, again.