This is a nice Monday puzzle. The theme was not obvious to me until I saw the revealer in the middle. 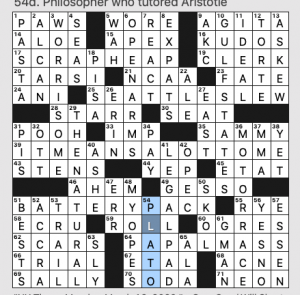 What I didn’t know before I did this puzzle: that the ALCAN Highway runs through Whitehorse, Yukon Territory. 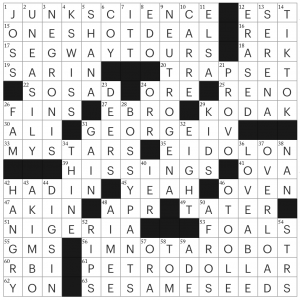 This felt really hard! My time is only slightly higher than my normal New Yorker Monday, but I felt like I was flailing around for a good portion of my solve. That said, I *really* like this puzzle. There’s so much fun stuff in it that I don’t even really care about the few small issues and one medium-sized issue I came across.

First, these 11 stacks, MY STARS! They’re so good! We have JUNK SCIENCE / ONE SHOT DEAL / SEGWAY TOURS in the NW (I had SubWAY TOURS in there for almost my whole solve, and that’s definitely not a thing, so that’s on me). The SW is equally fabulous with I’M NOT A ROBOT / PETRODOLLAR / SESAME SEEDS. I’d never heard of PETRODOLLARs (Coinage fo the 1973 oil crisis), but it was pretty inferable.

Other entries I loved:

Overall, this puzzle was awesome. Hard, but full of really great long and medium-length entries and updated cluing. A good way to kick off a week of working from home! In honor of this puzzle I will be having a Vieux CARRÉ later. Lots of stars from me.

Wasn’t feeling this one today. I don’t think it’s the puzzle’s fault all that much. I’m supposed to be at work and the mood feels surreal. Found it hard to want to tackle the harder parts of this puzzle.

There was more I didn’t like. Seemed like a lot of cross-referenced clues and answers I didn’t know/couldn’t infer. Some of those included LEORA, TGV, and THALIARD. Maybe not as many as I initially thought now that I look over the grid. I should’ve done better with this.

Is NO ESCAPE a feeling? I guess so. I always thought of it more as a situation.  Also, there are a lot of Greek gods/goddesses that begin with HE- I just found out. HELIOS, HERMES, and HESTIA are three that share the same number of letters as HECATE. Then there’s HERACLES and HEPHAESTUS…

Sorry for the late post. Haven’t been feeling too well lately.

I solved this without realizing what the theme was. Post-solve I went back and looked at the title, and then started looking for types of batteries. Bzzt! Wrong. Each theme entry starts with a word that’s a synonym for pummel. 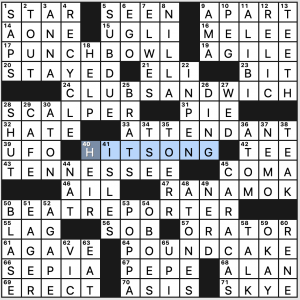 Pretty violent theme, and given the pounding headache I’ve had for 24 hours, I’m not well-disposed to it. But I don’t really have a problem with it. It’s straightforward and it works.

The solve as a whole was super-smooth; I don’t know that I had to go back and make a single correction. That said, there isn’t anything terribly sparkly in the fill; CARACAS and TENNESSEE being the highlights. Clues are very straightforward today allowing for a quick solve. 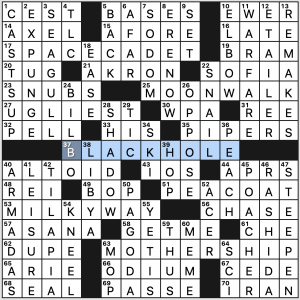 Fun entries, although I never knew SPACE CADET had any other meaning aside from its derogatory one. I guess originally it meant what you would think it meant (astronaut trainee), but I highly doubt anyone is using it that way anymore. And for MOTHERSHIP we also would have accepted [Led Zeppelin compilation album of 2007].

The corners are impressive in this one, each of them with stacks of 7×3. I especially like the SW corner. PEACOAT and PAGODA are also worth highlighting.

One clue of note. I wanted APPS for [“LinkedIn, Facebook, Instagram, Tinder,” e.g.], but once I filled in the last M, I got its meaning. It’s referring to the MEME a few weeks back (that was actually started by Dolly Parton!), in which a user posts what their profile pic might look like on those four apps, i.e. businesslike, friendly, artistic, and risqué. A number of other celebrities got into the act. My wife and I play “Animal Crossing Pocket Camp” (don’t judge!) on our phones, and here’s one I did up for this MEME. 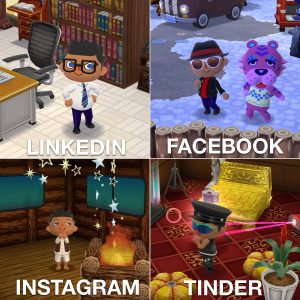 I hope everyone is staying safe, sane, healthy, and away from each other as we work together to curb the spread of this virus! Thank goodness for crosswords to keep us company during these anxiety-inducing times! I just switched to my first day of teaching high school students online (!), so forgive me if my writeups this week are brief. It’s been quite the adjustment to run classes via Zoom! I hope you’re all adjusting well to any disruptions or changes in your own life. 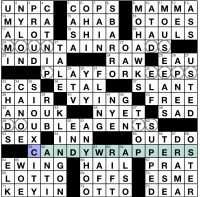 20A: MOUNTAIN ROADS (with MOUN DS circled) [Winding, hilly thoroughfares]
28A: PLAY FOR KEEPS (with P EEPS circled) [Not kids around]
49A: DOUBLE AGENTS (with DO TS circled) [Traitorous spies]
59A: CANDY WRAPPERS [Halloween discards, and what the three sets of circles represent?]

Each of the theme answers is “wrapped” in a candy: Mounds, Peeps (though these are more for Easter than Halloween?), and Dots. Cute idea, though I almost would have liked it more as a 21x puzzle as a way to explore lots of different candies wrapped around fun phrases. MOUSE EARS, KLINGON, and SBARRO were fun to see in the grid; UNPC not so much.