I hope everyone is staying safe and maintaining some degree of calm in these trying times. I’m trying to manage my anxiety by being productive — editing and constructing puzzles, designing curricula for my children now that the schools are closed (my teenage son argued that if he watched the debate, and then made a meme about it, it would count as both Social Studies and Art), baking bread, and writing this post for you. 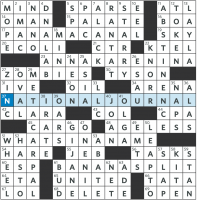 This week, Matt wants us to find a Beatles song — from a metapuzzle with a Spinal Tap title. How many of those could there be? Let’s take a look at the themers:

And there you have it: repeated instances of the letters NA, for a total of eleven both in the themers, and in the repeated lines of the “outro” of “Hey Jude”:

… which is a Beatles song, and our answer. It’s speaking words of wisdom, these days:

And anytime you feel the pain
Hey Jude, refrain
Don’t carry the world upon your shoulders
For well you know that it’s a fool
Who plays it cool
By making his world a little colder

Take care of each other out there, folks.

Here are our four, at their fabbest, singing for British television with host David Frost and a bunch of groovy young people joining in for the NA-NA-NAs. The kid wearing a blue jacket and standing near Ringo looks a lot like my very persuasive teenage son.