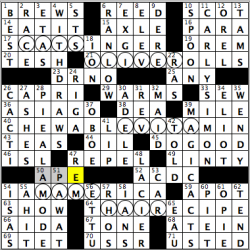 Erin go bragh! Hello there, everybody! Here is hoping that you all are doing well and, more importantly, staying safe to keep healthy during this time. Sending out my best to those who might have friends and/or family feeling ill right now, including those who have been affected by the novel coronavirus.

Broadway may have gone dark, but that doesn’t mean that the world of crosswords can’t bring it back to the center stage! Today’s puzzle has five theme entries that all have circles, with the letters contained in the circles turning out to be the name of a musical that once featured on Broadway! All of the words/shows in each theme entry span two words in the entry.

We definitely should celebrate the wonderful long, non-themed fill in this grid with a green beer, at least in spirit! Definitely had an ear worm when reading the clue to CARLY SIMON (11D: [Her song “Let the River Run” won a Grammy, a Golden Globe and an Oscar]), and got a sweet tooth craving seeing PIE A LA MODE (28D: [Ice cream-topped dessert]). Only slow down for me while solving was making sure PIET was the right spelling of the painter’s first name (60D: [“Broadway Boogie Woogie” painter Mondrian]). Can’t say that I’ve ever heard LINTY being used at all before putting it into the grid today (49A: [Like some dryer filters]). It’s possible that this grid was completed before the coronavirus-related reality of staying home really sunk in, but can’t help but seeing EAT IT (14A: [Food-themed “Weird Al” Yankovic parody hit]) and ATE IN  and being reminded that that’s what we’ll be doing even more of in these next few weeks and months (68A: [Had dinner at home]). What won’t be featured at all for a good long while is live sports, but that doesn’t mean we can’t stop talking about it on this space (as much as a few readers on here might not care for it in the first place). Anyways…

“Sports will make you smarter” moment of the day: TESH (20A: [New Age pianist John]) – Did you know that, arguably, the second most-recognizable theme song to a televised sports program was composed by the one-time host of Entertainment Tonight? (The “Heavy Action”/Monday Night Football theme will always be No. 1!) Many people know John Tesh as the former host of ET and for his music, but many are not aware that he composed the song “Roundball Rock,” otherwise known as the theme song for the “NBA on NBC” telecasts between 1990 and 2002 on The Peacock. The song, along with its memorable tune, took off in popularity because it coincided with Michael Jordan’s Chicago Bulls becoming a ratings bonanza while winning six NBA championships between 1991 and 1998. A couple of years ago, FOX Sports bought the rights to the song and currently uses it on its college basketball telecasts.  Growing up, the MNF theme song was my national anthem, and that pretty much meant that Roundball Rock was my “God Bless America.”

Here is Tesh’s masterpiece in all its glory! 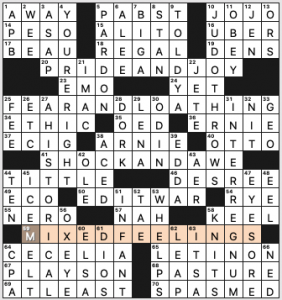 Quick review, as I did not get nearly enough sleep last night. Theme revealer is 59a. [Ambivalence … or a hint to 20-, 25- and 41-Across], MIXED FEELINGS. Unlike past MIXED FEELINGS themes where anagramming was involved, here the themers are a parent’s PRIDE AND JOY, Hunter S. Thompson’s FEAR AND LOATHING, and the dreadful warring of SHOCK AND AWE.

Just saw “JOJO Rabbit.” It was good but also kinda rough on the emotional edges. I recommend a light comedy instead.

Likes: Wikipedia EDIT WAR, “YOU’RE RIGHT” (of course I am), “TOLD YA” (see?), and fancy INTERREGNUM. The EDDA AER DES’REE chunk might have snagged some solvers, yeah?

Did not know 64a. [Novelist Ahern with the best sellers “PS, I Love You” and “Love, Rosie”], CECELIA. Irish writer. I prefer the Cecilia spelling.

No, there is no such thing as a BREAD CURTAIN, but I can’t be the only one who thought that was a thing for a second, right?

THEME: Familiar phrases that end with a word which can precede “curtain.”

This one works well enough, even if it’s not particularly exciting. I guess I’m not as passionate about curtains as I should be. I’m more of an Ikea blinds kinda guy.

SODA BREAD is a great answer (oh wow, I just realized it was St. Patrick’s Day… I guess that’s not on the forefront of my mind at the moment). But wow- doesn’t it look like it wants to be part of the theme? And hey, just for fun I googled “bread curtain” in quotes, and there are 32,000 hits. I’ve seen more obscure entries.

Hope you stocked up on Guinness. Enjoy the day.

Gary Larson’s here today with a St. Patrick’s Day puzzle, which everyone can hopefully enjoy while they stay in (to curb the spread of COVID-19) instead of going out to the bars! 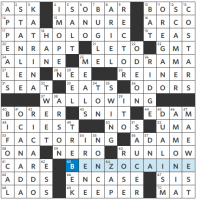 Stop using the f and some Irish sounding phrases can be parsed from otherwise regular words. A neat idea and a pleasantly unexpected way to celebrate the holiday. Slight ding for the letter f appearing otherwise in one of the theme entries, but this puzzle’s theme was fun overall and gave me a few good groan moments.

There were also a few bad groan moments though – characterizing Mel Gibson as just an actor without mentioning his wild anti-Semitism, cluing Trump’s comments as simply TWEETS without any more characterization as to how harmful, damaging, and unstable they are – those were certainly choices I wouldn’t have made. I also cringed at the anachronistic A DAME and Hurricane KATRINA (too soon!), but was pleased to see many other women in the grid, including UMA Thurman, Yoko ONO, ARIEL, MAE WEST, IRENE Adler, and the Irish ROSE. A mixed bag, but smooth solve for me. 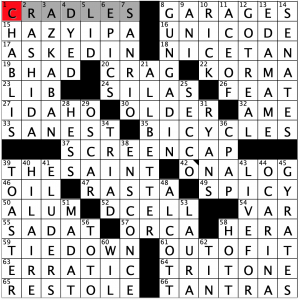 A freestyle Jonesin’ this week, perhaps apropos since most of us might have a little more free time this week. Even if your job is unaffected, your sports watching is, as well as some other TV shows that aren’t filming for the time being (late night talk shows, for example). I have plenty of puzzles to work on, and I will probably start working semi-remotely myself this week. I love freestyle puzzles, so I am happy with a few more of these, but I am sure we will be back to more thematic zaniness from Matt next week. 4.4 stars this week.

Just noticed: only 20 more until Jonesin’ #1000, and that should be just before the newly rescheduled ACPT! (Actually, it looks more like the week of August 3 instead.) That seemed so far away not too long ago. Time flies when you’re getting old! Back next week with another Jonesin’! 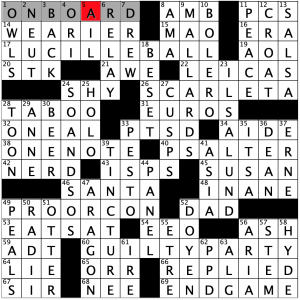 I don’t think I am familiar with Winston’s byline, but I do like this puzzle! The revealer is clear at the end of the puzzle, and I had no idea what the starrred clues were hinting at until the VERY end of my solve!

So we are talking about board game, ball game, etc. The entry at 49A seems a little contrived, but I thought it was clever and got it right away. There seem to be quite a few entries that are timely in light of what is going on this week; I will discuss a few of those below. But for now, great puzzle, Winston! 4.3 stars from me.

Everyone be safe this week. We want everyone to come out of this OK!