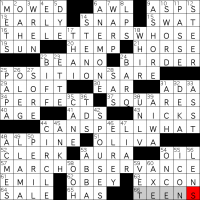 hello and welcome to episode #615 of matt gaffney’s weekly crossword contest, a guest puzzle from peter gordon called “Transcendental Meditation”. the instructions for this week 2 puzzle are: What is the answer to the question in this puzzle? (Hint: Z = 26)

okay, well, the question in the puzzle, split across six across answers, is: THE LETTERS WHOSE / POSITIONS ARE / PERFECT / SQUARES / CAN SPELL WHAT / MARCH OBSERVANCE? the answer was pretty strongly suggested by just the timing of the puzzle, let alone the title, but let’s work through it. the perfect squares less than 26 are 1, 4, 9, 16, and 25, corresponding to the letters A, D, I, P, and Y if we associate letters with their number positions as per the hint. those can be arranged to spell PI DAY, or march 14, which was this past saturday. i can definitely remember being a math nerd as a kid and this “holiday” not really being A Thing, but at some point in the past decade or two, it has become A Thing.

in case you’re wondering about the title: in math, transcendental numbers are a subset of irrational numbers. an irrational number can’t be written as a fraction with integer numerator and denominator. a transcendental number is one that can’t even be written as the solution to any polynomial equation with rational coefficients. for example, the square root of 2 is irrational, but it’s not transcendental, because it’s a solution to x^2 – 2 = 0. pi is the most famous example of a transcendental number; e is another. there are, of course, infinitely many more, but they generally don’t have special names or symbols, and without names, it’s hard to even talk about them, because they can’t be neatly written in decimal or fraction form.

so this was a tidy little puzzle based on a curious mathematical observation. it would have been even cooler if the positions of the appropriate letters were somehow “circular numbers” instead of squares, as that would have been more appropriate to pi, but what can you do? math is math, even if it doesn’t always lend itself to the perfect wordplay.

as somebody with an interest in mathematics, i was mildly tickled by the puzzle. how about you?