How are we all feeling?  I’m going to miss not being in Stamford this weekend, but there’s plenty to look forward to.  This Thursday’s NYT is from Wayne Bergman and Gary Otting, neither of whom I’ve seen in our site tags before.  Wayne and Gary, if this is your NYT debut, congrats!

I like the idea of the theme of this one, even if I’m not sure of its execution: 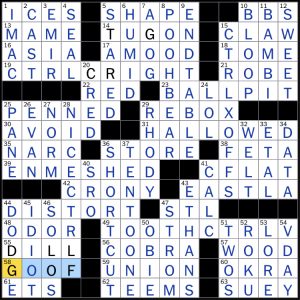 This is all about computer SHORTCUTs and what they mean.  CTRL-C makes 19A COPYRIGHT, CTRL-X is for CUT-OFFS, CTRL-V makes TOOTHPASTE, and CTRL-F makes for a NICE FIND indeed. Something about the way the CTRL command appeared anywhere in the answer made the grid look a little clunky to me, but the more I sit with this, the more I like it.

The title is probably meant to be read, “Double-T Axed.” Theme entries that originally had two Ts have them both removed. If you didn’t figure it out from the title, the revealer STRIPTEASE (strip Ts) [Burlesque act, or read phonetically, how to make phrases like five in this puzzle] spells it out. 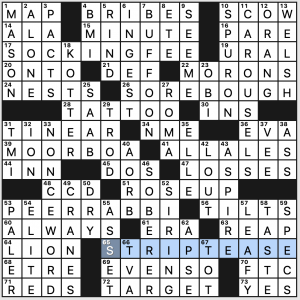 In the fill CAROUSELS gets a great clue [They may have a lot of baggage] and I’m always happy to relive the theme song to Welcome Back, KOTTER. I had never heard of a NONCE WORD [“Chortle,” originally]; the Internet tells me its a word that was originally created for a single use only. That was neat to learn. Also good: BUFFOON.

All in all, a mixed bag. The theme works but nothing about it really amused me. Some strong fill and some energy-sapping fill as well. 3.5 stars.

I thought this took me much longer than 6:42. We finally got our kid home from college early this morning and the combination of stress and exhaustion has my brain stuck in second gear. I suspect this was not as difficult as it felt. 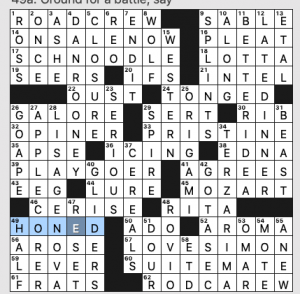 Things I liked: ROAD CREW for [Workers who pave the way] – sneaky non-S plural! SCHNOODLE (a Schnauzer/Poodle cross; not always black and white but always adorable). LISA GENOVA and TERZARIMA anchoring the bottom half of the puzzle. [Angel with a heavenly stroke] for ROD CAREW. PLAYGOER for [Person who might experience a tragedy].

Things that surprised me: DOUR for [Unyielding]. I think of DOUR as cheerless. Google tells me it also means stern or severe. Good to know. I looked at [Life line] and wondered if it was something from the famous commercial. I was in the right aisle; it’s CEREALS.

What I didn’t know before I did this puzzle: that there’s a documentary about ORIGAMI called “Between the Folds.” 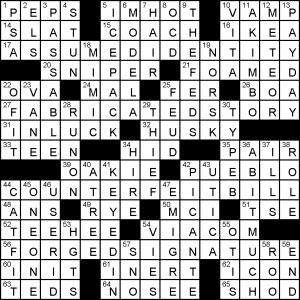 Today features four phrases for something hokey: ASSUMEDIDENTITY, FABRICATEDSTORY, COUNTERFEITBILL and FORGEDSIGNATURE. They’re tied together with some kind of story about a bank, but it’s a bit precious for me. Your mileage may vary. 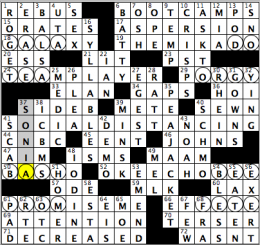 Brendan Emmett Quigley crossword, No. 1245: “I Need My Space”

Good day, everyone! I’m sure a number of you are catching up on crosswords with the extra time that you are home, and, with my extra time inside, can finally get to you one of these reviews on a BEQ puzzle! Again, here is hoping all of you are feeling well and/or feeling as good as you can feel at the moment.

Today’s puzzle is all about the timeliness of the events that have forced us to engage in SOCIAL DISTANCING (41A: [Public health measure to reduce transmission of disease, and what’s happening literally in this puzzle]). In the grid, two different types of social gatherings are presented on the same line on four occasions, but those events, spelled out in the grouped circles, are on opposite ends of the grid in separating the “participants.” Now just tell those spring breakers down in Florida to channel the spirit of this grid and stop congregating!

The 16×15 nature to the grid allowed for some lively fill, and it did not disappoint with both the Northeast and Southwest portions proving some wonderful entries, with the pairing of BOOT CAMPS (6A: [“Get training fast” seminars]) and ASPERSION being my personal two favorites (17A: [Slander]). There were a couple of other entries in the grid that made me think of the uncertain future that has come with the novel coronavirus scare, including each and every MEDIC (25D: [Doctor in a theater?]) and EENT (45D: [M.D. specialty]) out there working around the clock, as well as MLK and the line attributed to him in the clue and thinking about the many people who are without healthcare, which definitely is/should be a basic human right (59A: [“A right delayed is a right denied” speaker, initially]). To boot, I also felt a German feel to this puzzle, from EIS (64D: [Chunks in the 30-Down]) to GALAXY, which was also the nickname of a professional football team and league, NFL Europa, affiliated with the National Football League in Frankfurt, Germany. Speaking of NFL Europa, and team that once was in that league…

“Sports will make you smarter” moment of the day: RHEIN (30D: [Köln’s river]) – From 1995 until 2007, the Rhein Fire were one of the more successful teams in NFL Europe/Europa, the professional football league that served as a feeder system and training ground for potential future NFL players. The team, which played most of its home games in Düsselforf, resurrected the nickname of the Birmingham Fire, one of the original teams of the World League of American Football, the league that soon was purchased and became NFL Europe. The Fire won two championships, World Bowl VI in 1998 and World Bowl VIII in 2000. The NFL announced the closure of the European branch after the 2007 season, yet, in my opinion, no alternative football league since 1991 has matched the quality of football on the field of the NFL than the WLAF/NFL Europe/NFL Europa. Love live the Rhein Fire…and Frankfurt Galaxy…and Barcelona Dragons…and Orlando Thunder…etc, etc.

Thank you so much for your time, friends! Have a great rest of your Thursday, and hope you have a good and safe weekend coming up!