Reminder: The Crossword Tournament From Your Couch takes place this Saturday online! Something fun to do for all these cruciverbalists in capitivity.

Also: Team Fiend is stretched thin at present, with all the current mayhem, so we appreciate your understanding when some puzzle write-ups are late or absent. 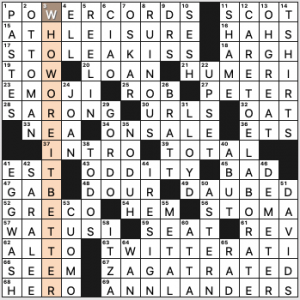 Aaaaah! Two of my faves have teamed up on a themeless. And they’ve nailed the long fill. I love the 15s, “WHO WORE IT BETTER?” ([Tabloid question next to two people in the same outfit]—though this is also a staple in some pop culture magazines) and “CARE TO ELABORATE?” The stacks are also slick: POWER CORDS / ATHLEISURE / STOLE A KISS, and TWITTERATI / ZAGAT-RATED / ANN LANDERS! Plus there’s “OH, GREAT” and a baker’s EGG WASH, and “NO DUH.”

Let’s check out some clues and whatnot:

Not all of the shorter fill is wonderful, but nothing activated the Scowl-o-Meter. 4.25 stars from me. Be safe, be well!

First of all, *that’s* how you spell Meredith VIEIRA?? Learn something new every day, I suppose. Anyways, this puzzle was fun! Not a lot of long stuff, but plenty of scattered medium-long entries, including CELESTE NG, SYCOPHANT, BAR THE DOOR, WHITE WINES, PHASE OUT, and my favorite, WHOA WHOA. The layout of this grid, relatively unconstrained by stacks or marquees, allowed the fill to be really exceptional today. And the clues, while heavy on pop culture (and because this is a Natan Last puzzle, extra-heavy on music), are also fun and packed with the constructor’s voice.

Aside from those magnificent longer entries, some fun shorter ones made it in as well: KOAN, DR CLAW, two different ways of saying “Hell Yeah!” (I’M IN! and LET’S GO!), MCAT (happy Match Day, btw, to all “future G.P.”s and others!).

Overall, I really enjoyed this puzzle. Plenty of fun and fresh entries and slightly sassy cluing and constructor voice means a pile of stars from me!

Theme: Machines that end in V, or V-ENDING MACHINES (52a, [Dispenser of small items … or, when read as three parts, a hint to the starred answers]. 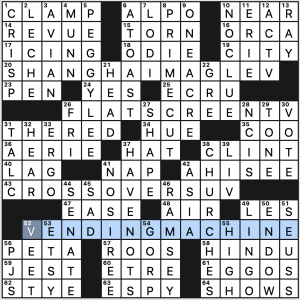 This is really cool. Not only is the revealer clever, but as a constructor, I know how limiting it is to be forced into a situation where you have a word that ends in V; you really want to avoid it. In this case, our constructor says “bring it on” and finds three solid examples of machines that end in V. It’s tight, it’s constrained, and it’s well-executed. Brava!

Fill highlights include PEGGY LEE, PRIME CUT, CHURCHES, HAVE-NOTS, and the colloquialisms “NO CLUE,” “AH, I SEE,” and “NO SIREE” (small dupe there with the NOs). 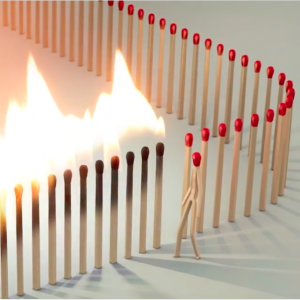 I used to solve a lot of cryptics back in the day, but in recent years I’m down to maybe one every six months. Let’s see if I can keep up with Stella Z. on her Inkubator puzzle. 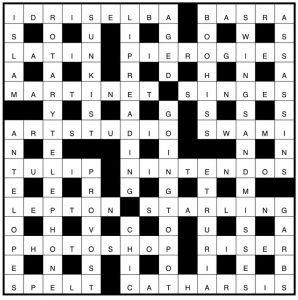 I usually tackle a cryptic by giving each clue a quick look to pick up any low-hanging fruit — an easy anagram, a gimme hidden word, that kind of thing. I was pleased to find that 11 of the puzzles clues fell on this first run-through! Confidence-building.

Next to fall were 16-A [Lit up strange Dutch flower] which is a TULIP (from LIT UP) of course, followed by the nice [Quaintly reeled off the letters in an ancient grain] which is a double meaning for SPELT.

My favorite clue was at 1-Across, which took me a while to understand even after I had the answer: [I’d back talented gentleman (he of “Luther” and “Cats”) = IDRIS ELBA. How? ID from “I’d,” then your “talented gentleman” is an ABLE SIR, which you reverse (“back”) to get the answer. Nice one!

I also liked 3-D [Citrus brand done for; it’s a mess] for SUNKIST, with the SUNK (“done for”) followed by “it’s a mess” meaning you anagram the ITS into IST.

Not sure I’ve ever reviewed a cryptic before, but enjoyed it and would do again! 3.75 stars. I should also add that I’ve been solving Stella’s themelesses this year at her new(ish) site Tough As Nails, where she posts a fortnightly freestyle. They’re very fun.

Thanks to Martin Herbach for explaining the theme. I was stumped.

The revealer is [Basic auto maintenance, and how each answer to a starred clue was created]: OIL CHANGE. Martin pointed out that each theme answer is an anagram of a type of oil 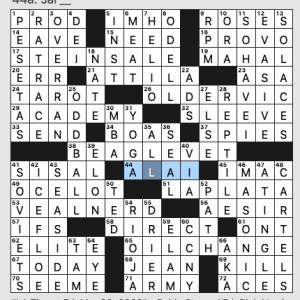 Clever theme, well-executed, and totally not in my wheelhouse. No matter how long I struggle through the Spelling Bee, I will never be a natural at anagrams.

What I didn’t know before I did this puzzle: that ATTILA is mentioned in Dante’s Seventh Circle.