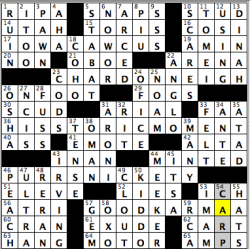 Hello there, everyone. Again, I hope all is well with you and that you’re staying safe…and staying at home!

With so many instances of solvers having to put in sounds made by animals as entries, I don’t think there have been too many times where animal sounds have been used in puns to reimagine common phrases. Well, you have it here today, with the animals making their voices heard with these theme entries!

Even if  I did not have a strong interest in sports, I definitely would have given a hat tip to the clue to UTAH, a nod to the NBA basketball team (14A: [State with a famed Jazz ensemble]). Actually, one of the seminal moments in really making a lot of citizens understand the seriousness of the coronavirus happened on March 11 when one of the players on the Jazz, Rudy Gobert (pronounced “go-BEAR”), downplayed the threat of the virus by touching all of the reporters’ audio recorders at the end of a media session before a game that eventually was called off just before tip-off because he tested positive for the virus. (Gobert later apologized for his recklessness and made a couple of donations as part of relief efforts against the virus.)

Not that much long fill in the grid outside of the theme entries, but there was still some nice fill despite that, with the neighbors CLOUT (49D: [Leverage]) and KIDDO being a couple of the main standouts (50D: [Generic name for a child]). Best entry to me, by far, is the nod to a wonderful poem, I, TOO (2D: [Langston Hughes poem about equality]). To all who have experienced discrimination, and to those of you who have and/or know people experiencing that now with the racist remarks in describing the coronavirus, please know that you, too, are America!

“Sports will make you smarter” moment of the day: IRVING (43A: [“The Cider Huse Rules” author John]) – One of the most skilled players in a league full of skilled players, current Brooklyn Nets guard Kyrie Irving may be best known for his Game 7 three-pointer with under a minute left in Game 7 of the 2016 NBA Finals that sealed the the Cleveland Cavaliers’ first-ever NBA championship in its victory over the 73-win Golden State Warriors. Irving, the No. 1 overall draft pick in 2011 and six-time NBA All-Star who has a popular line of shoes and other apparel, also made news in 2018 when he questioned — and later retracted on — whether the Earth was actually round. True story.

I hope this post finds everyone doing well, staying safe/healthy, washing their hands, and staying inside and socially distanced as much as possible! I really enjoyed today’s WSJ and I think you will, too: 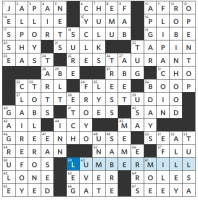 “Get a Room” is right – each theme entry reimagines a common room in a new way, many to clever effect. I’m not sure I’ve ever heard of a LOTTERY STUDIO, but I guess the room where lotto balls are drawn has to be called something? Otherwise, a fun theme that has me trying to think of more possible theme entries.

Other random thoughts:
– Many puzzles I’ve reviewed recently have felt like they could have been from twenty years ago, but not this puzzle. I loved how fresh and fun it felt! You’ve got Questlove, ELLIE Goulding, The Notorius RBG, John CHO of “Star Trek Beyond,” the Brooklyn Nets, CLAIRE FOY from “The Crown,” TOBLERONE and FROYO (okay, not so new, but fun and delicious!), and [Viral sensation] MEME. It’s modern fill and cluing like that that makes a puzzle enjoyable. I can get a sense of the constructor’s personality!
– In addition to the great women listed above, we also have the iconic Betty BOOP and the APGAR test (named after anesthesiologist Virginia Apgar – it’s her name AND an acronym!). 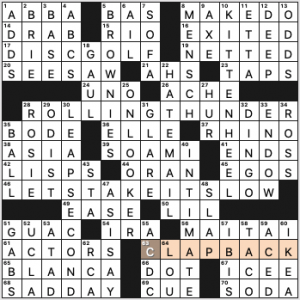 The theme revealer is CLAPBACK, clued 63a. [Respond quickly and sharply to criticism … or a hint to 17-, 28- and 46-Across]. I love love love that this is in the puzzle. If you hang out on Twitter much, particularly Black Twitter, you’ll encounter plenty of clapbacks (and the verb seems to have mostly jumped into being one word rather than a two-word phrase). The writer Roxane Gay (@rgay on Twitter) even includes it in her Twitter bio: “If you clap, I clap back.” (Two-word verb! She’s meticulous.) The “clap” is more of a verbal slap, and you’d best be careful who you clap because savagely witty and righteous people will concisely eviscerate you in their clapback. Anyway! The other three theme entries end with words (at their “back”) that can precede “clap”:

I really like the theme. Crisp entries, great revealer.

Women’s month in the Universal is unfortunately coming to an end, but not before a fantastic debut from Deeksha Gaur. Congrats Deeksha! Can’t wait to see more from you. 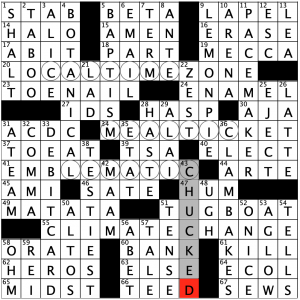 To get a word as long as CLIMATE to be anagrammed into phrases that aren’t forced is quite impressive! EMBLEMATIC is not as splashy as MEAL TICKET and LOCAL TIME ZONE, but it works just fine (and the theme reminded me that it’s not spelled EMBLAMATIC!)

The longer downs are very nice too- BOTANICAL, PACEMAKER, DEBIT CARD, and CLAM BAKES. I’ve never been to a real CLAM BAKE. Those words only remind me of the month I played piano in a pit eight times a week for the musical Carousel (Side Note: Does anyone ever talk about how strange that musical is?)

My only nit has nothing to do with the construction, but it’s the usual nit with Universal. Casual solvers (i.e. most solvers) are asked to count letters today because Universal can’t incorporate circles in its grids. However, in this case, the word CLIMATE sticks out so well due to the unique letter set and the length. I don’t think circles are all that necessary! 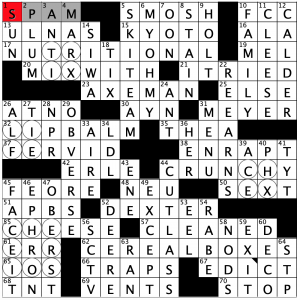 The title of this puzzle, in the lens of the current pandemic, may be the only “Bowl Games” we see in 2020. There is talk of even the college football season being affected. Yes, it is only March (April tomorrow!), but they have already cancelled spring practices, and summer is right around the corner. We shall see.

In the meantime, in this puzzle we are talking about VERY different bowls! There are four theme entries:

I didn’t think that these were symmetrical at first, but yes, Matt managed to tie 32A to breakfast cereal! And in the circled boxes, we have Trix, Life, Chex, and Cheerios in little mini “bowls”. A fun theme, and very well executed. 4.5 stars today.

Tons of candidates for the OPCRW*! Lots of those in the following highlight list: 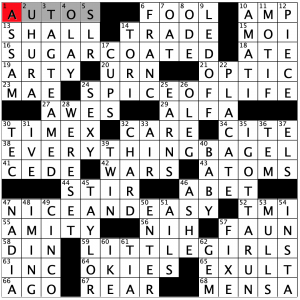 Kevin and Bruce together today for a puzzle that references a popular nursery rhyme:

I have no girls; only boys. So I cannot verify the truth of whether little girls are made of “sugar and spice and everything nice!” I am sure some parents of girls at times might argue otherwise! Well done, gentlemen! 4.2 stars this morning.

Everyone have a safe week!