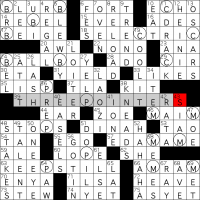 hello and welcome to episode #617 of matt gaffney’s weekly crossword contest, “Game Time”. for this week 4 puzzle, the instructions tell us that the answer is a famous athlete. what are the theme answers? nothing is indicated as such, but there’s one long answer in the grid, across the middle: {Big b-ball baskets} THREE-POINTERS.

what to do with this clue/entry? i had a few false starts, starting with the observation that the clue itself is triply alliterative. but that didn’t go anywhere. the next thing i looked at was the four other medium-long across answers:

i noticed that all of these contain two pairs of repeated letters (E and C in SELECTRIC, B and L in BALLBOY, actually three pairs in EDAMAME, and E and L in KEEP STILL). that didn’t go anywhere either, but it then led me to notice that the title “game time” contains a repeated two-letter ending (“-me”), so then i started looking at entries like {Much Twitter content} MEMES, and also a bunch of clues containing repeated digrams, especially {Lying to mama, e.g.} NONO, which has repeated bigrams in both answer and (unnecessarily, it seems) in the clue. similarly {Defer to a Ferrari, e.g.} YIELD goes out of its way to repeat “fer”. there are a bunch of these, but again, this didn’t go anywhere.

looking at the puzzle again a day later, i had an aha: THREE-POINTERS could refer to a different game (than basketball) entirely, namely scrabble. there are four tiles in scrabble worth three points: B, C, M, and P. and i look at the grid for these letters, and i noticed something strange: there are four to six of each of these letters, and each is confined to its own corner of the grid, as you can see in the screenshot above. you can take each group and play connect-the-dots to form a different letter: the B’s form a K, the C’s form an O, the P’s (including the one in THREE-POINTER itself) form a B, and the M’s form an E. this spells out KOBE, as in the late kobe bryant, the answer to this meta. fittingly, he’s a basketball player, although not especially one known for this three-point shooting.

i have to say, this is a very nice meta. it’s certainly subtle enough for a week 4, but once you get the aha, the click is very strong: it cannot be a coincidence that those letters only appear in their own corners, and that they are arranged to form letters of their own. so that’s very cool.

i saw on facebook that the redoubtable jeffrey harris (aka jangler) broke his incredible multi-year streak on this puzzle. (how many weeks was it? several hundred, but i don’t have the exact number on hand.) this certainly wasn’t the hardest one of the last several years, but if anything, that only goes to emphasize how remarkable jeffrey’s streak was. hats off to a legend, and here’s to the start of a new streak.

hope you’re all doing well and staying safe! let’s hear from you in the comments.