It’s April Fools’ Day, but here we have essentially the opposite of that. With an apt title, phrases that normally have the word “fool” in them, have that word replaced with a similar-sounding word. 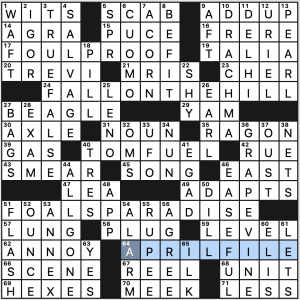 I like this theme quite a bit. Sure, there doesn’t seem to be a rhyme or reason why any particular F-word (for lack of a better term) goes in which phrase (I’m sure decent-enough clues could be constructed for FOUL ON THE HILL or FUEL ON THE HILL), but during the solve, you don’t realize this. You simply work with the clue you’ve got until you get the answer, and it flows. Although it strikes me that this could’ve been a vowel-run theme with FAIL, FEEL, FILE, FOAL, and FUEL. Interesting.

Regardless, I like the theme entries for the most part, and the clues make sense. Lastly, the title pulls everything together to give the puzzle purpose.

Really fun fill as well with SALVAGE (just a good word in and of itself), TRUE/FALSE, DRACHMA, GRAPEVINE, and a toddler’s “ALL GONE!” Good stuff. EASEFUL [Affording peace] sounds a little far-fetched, and URIEL [One of the archangels] is well out of my wheelhouse, but the crosses helped with those. Cluing was mostly straightforward.

A fun theme and strong fill on this one. Four stars. 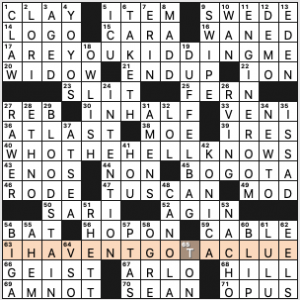 Wishing you all a gentle April Fools Day on Wednesday, because none of us need any unpleasant surprises this week. The puzzle’s theme reverses the usual prank, by making you think the puzzle will be impossible but turning out to be of standard Wednesday difficulty (if not a tad easier):

So anyway, we’re all glad we weren’t actually being quizzed on geographical obscurities. I’ll bet Eugene Maleska would have known the answer to at least one of these!

Not wild about some of the fill: plural IRES, ENOS, AGIN, BIG A, ETHNO-, VSO, HOU, NEW TO, and the wildly arbitrary IS SAD (IS + adjective as an entry? I’ll pass).

3.5 stars from me. Be well and wash your hands!

This appears to be a debut. Any relation to the editor?

This theme stymied me for far too long, but it makes good sense. DECLUTTER at 64a is clued [Get rid of unnecessary stuff, as you must do in the starred answers]. Each of the other theme answers is a phrase the includes a synonym for “rubbish” which you must ignore to make sense of the clues. 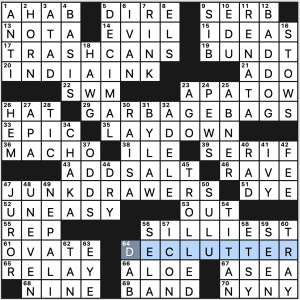 I had large swaths of white in my grid as I tried to work my way down. I kept thinking the theme answers would make sense at some point. But it took me getting to the revealer to realize what was happening. Once I did that and sussed out GARBAGE BAGS, then the rest fell quickly. It’s nice when it works out like that.

Our long non-theme entries are INDIA INK, SILLIEST, LAY DOWN, ADD SALT, DECIMAL, and TROLLED. Not bad. I also like BAD DOG and CHAKA Khan.

I don’t think I’ve ever come across the name RENATA [Name meaning “reborn”]. Anyone have any examples of famous RENATAs? 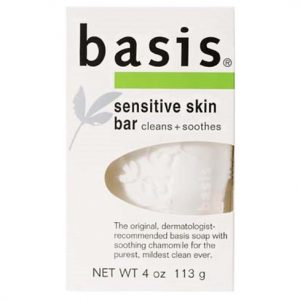 Nice puzzle with a satisfying trick to it. 3.7 stars. 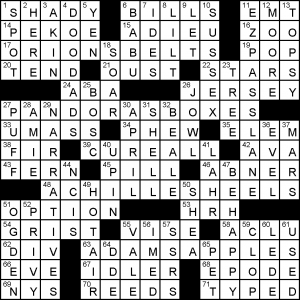 Really fun theme today, albeit it has one very loose wheel. The first three entries follow the pattern [Greek mythological person]’s [thing], but the thing is pluralised and its meaning changed. A very tight and interesting theme. ACHILLESHEELS is a particularly creative entry. I’m not one who has ever encountered shots referred to as BELTS, but where else could you go with that? The wonky wheel is ADAM’SAPPLE(S); suddenly we switch to the Old Testament / Tanach. It feels forced to me.

Other notables:
[Grade of tea leaves], PEKOE. Oh? I thought it was a variety?
[Royal-ly made?], TYPED. Is Royal a typewriter brand?
[News article intro], LEDE. Nice to see this gain traction in puzzles. 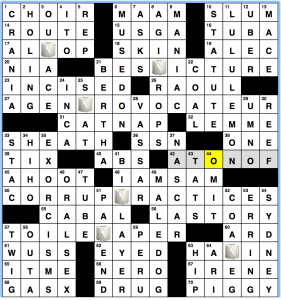 I should have seen this AVCX theme coming, and I can’t say I’m surprised that this is what “We’re on a Roll” was hinting at, but I also was not expecting a crossword using recent TP shortages as a theme so soon.  Anyways, here’s how this theme works:

As far as the theme goes…it does the thing it sets out to do and it’s current.  CORRUPT PRACTICES isn’t my favorite entry of the bunch, but as far as another 15 to match with AGENT PROVOCATEUR, it gets things done.

Elsewhere in the fill: it took forever for me to parse ATONOF, the answer for “Beaucoup” as A TON OF.  I kept wanting it to be someone’s name.

C’est la vie – enjoy the rest of your Wednesday.