Theme: Phrases with certain numbers in them have that number replaced by a single Roman numeral. WHEN IN ROME is the revealer at 64a, clued [Beginning of travel advice appropriate to the starred answers]. 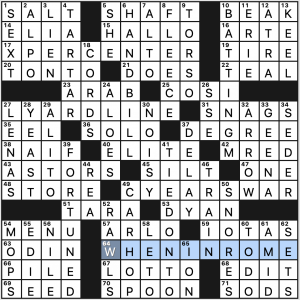 Nifty theme which I enjoyed. When it comes to Roman numerals, I used to always get D and L mixed up. But now it’s a point of pride for me that I can remember that D and L stand for 500 and 50 respectively. What cemented it in my mind was the 2005 Super Bowl, the “Extra-Large Super Bowl XL.” Knowing that we are nowhere near the 500th Super Bowl, I’m now able to remember that L is 50 and therefore D must be 500. If I’m still around for Super Bowl D, I might start getting confused again.

With six theme entries in a pinwheel design, there’s not much room for long flashy fill. We get HANDBILL and TIED ONTO, which are fine, but not terribly exciting.

Cluing felt heavily reliant on trivia today, which sometimes happens on a Thursday. These in particular I did not enjoy: 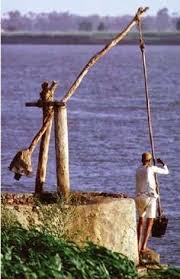 Contrast those with the clue for NILE: [Shadoofs raise water from it]. Yes, it’s trivia, but at least it’s interesting and I learned from it. A shadoof is a pole with a bucket and a counterweight, making it look vaguely like a trebuchet.

Nice puzzle with a satisfying trick for a theme. Fill is on the average side and trivia in the clues sapped some of the fun out of it. A mixed bag for me. 3.4 stars.

April Fools! After last week’s brain-crushing meta, Peter and Trip team up to give us utter wackiness.

I love these puzzles. There are just enough “normal” entries to give me a foothold and then I’m off and running to cloud-cuckoo-land, giggling all the while. This was just the right medicine for the middle of another week that feels like it’s going on for years. 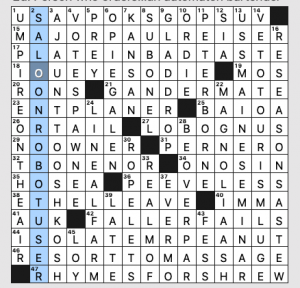 It’s Thursday, y’all!  We’ve almost made it through another week.  Let’s talk about the NYT crossword, which is from Evan Mahnken this week.  Our revealer at 57A points to “the contents of some special squares in the grid” having “Fancy-schmancy language”.  I’m more familiar with those being TEN-DOLLAR WORDS, but times have changed and apparently those are now FIVE-DOLLAR WORDS.  Anyways, as suggested by that, five squares in the grid have “dollar words”: 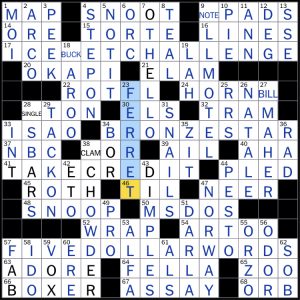 I liked this one!  NO TELL MOTEL was my aha into what was going on, and figuring it out early followed by BUCKAROO shortly thereafter meant that this felt pretty easily, though CLAMOR/CLAM CHOWDER took forever to click for me.  My brain thinks “cocktail” for “Manhattan” before it thinks chowder.  Throwing in ALS at 61D was a nice touch to go along with ICE BUCKET CHALLENGE.

Fantastic puzzle! In more ways than one, of course. 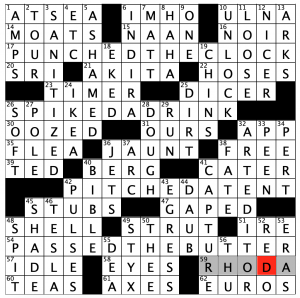 A nice consistent set here. I must admit, I didn’t really understand the “extraordinary” part of the clues, but I suppose it goes along with the title. “Extraordinary” more of a synonym to “fantasized” than “great.” What other things are PASSED, PITCHED, SPIKED, and PUNCHED in common phrases? I know I initially wanted PITCHED A FIT and PASSED THE TORCH when I got the first words respectively.

Nice longer downs in the fill included SANITIZED (because that’s on all our minds right now!) and ART EDITOR.

Overall, 3.5 Stars. An enjoyable start to the day! 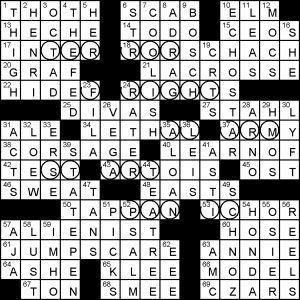 JUMPSCARE is a really excellent entry, let alone revealer. The rest of the theme is a little more covert. Five synonyms for scare (n.) are presented, but hidden across two entries – “jumping” the black square.

This theme time tends to have few splashy entries. This is couple with a fairly taxing grid design. The frayed edges here are the bottom right with OSIER and ICHOR in one corner; both ALOAN and ADRAG , two arbitrary A ___ entries in one puzzle; a very name-heavy corner with ECHOSTAR and tough clues for LACROSSE and BOSCH.