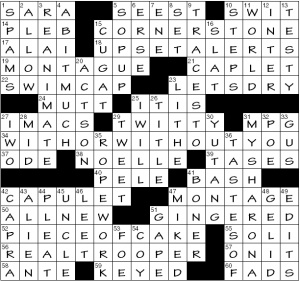 Oops, thought tonight’s puzzle was the Thursday and that I had the night off. Anyone else losing track of which day of the week it is? Everyone in the household staying home seven days a week?

For some reason, this themed puzzle was slotted for a Friday. At 72 words, it’s the max allowed for a themeless puzzle, but we’ve seen 72-worders on theme days, no? The theme is cute:

I’d never noticed that, nor come across it as a “hey, check this out” bit of wordplay trivia. I like this theme.

I don’t much like what happens to the fill when you reach for a 72-word grid with non-thematic 8s, 9s, and 11s. The writing was on the wall when I hit PLEB atop ALAI early on, and some other fill felt clunky: LETS DRY, GINGERED, SOLI, ERSE, ENE, ROPEWORK, TASTES OF, TRACES TO.

On the plus side, I have a soft spot for the 1979 hit “MY SHARONA” … except now when Googling to fetch a video for this post, I saw the lyrics (I am terrible at discerning song lyrics) and it’s a hard nope. Gross, inappropriate, creepy, reminiscent of tonight’s Law & Order: SVU episode. Eww.

Let’s restart. On the plus side, PIECE OF CAKE was a snap, and I dig the clue for CORNERSTONE, 15a. [Place to look for a date] (a date carved in stone, not a social companion).

Here’s U2 to play us out with the theme revealer.

3.25 stars from me. I wish the theme had been configured to work with a higher word-count grid allowing for smoother fill. The theme is nifty but the grid here didn’t give it adequate support.

At least I expect a theme for the LAT Friday puzzle, as opposed to today’s NYT. Yes, I have an opinion about that.

Back to this puzzle! David takes standard phrases and clues them as if they referred to movies. I enjoyed it although many of the movies were new to me. 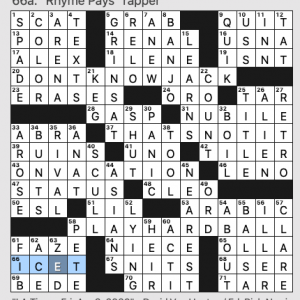 The movie titles were easily inferable because all the phrases are solidly in the language. The clues are amusing and overall I enjoyed the theme.

What I didn’t know before I did this puzzle: in addition to all the movies, I didn’t know that Shannon was in County CLARE. Regular readers will know geography is not my thing. So will anyone who has ever played me in Learned League.

What a fun puzzle! I’m grateful to the New Yorker for keeping me on track with the days of the week right now, as everywhere else in the world time and days have lost all meaning (looking at you, semi-themed NYT Friday…). This puzzle honored the New Yorker pattern of easier Fridays (relative to Mondays), and I felt like I ripped through it, with just a couple of sticky spots that slowed me down. 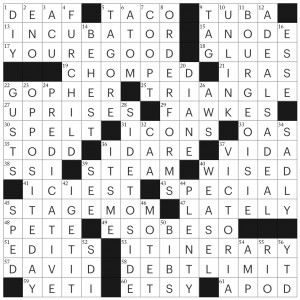 I loved (most of) the long entries in this puzzle. INCUBATOR (which I 100% spelled with a K instead of a C at first because I spend a lot more timing thinking about the Inkubator than I do INCUBATORs) and YOU’RE GOOD (a lovely colloquialism) in the NW were probably my favorite pair, but I also liked BOURGEOISIE and A DEAL’S A DEAL down the East. ITINERARY and DEBT LIMIT aren’t quite as crunchy, although the clue on DEBT LIMIT was great [Red ceiling?]. In the West, the joy that is OPPOSITE DAY and its clue [Children’s observance that only happens when it doesn’t] were definitely not matched by the yuck of PREDICATIVE, but on balance I’d say that tradeoff was definitely worth it. Similarly, with SIDE TO SIDE and ORDER FORMS (in parallel positions), one is super fun and the other is meh.

Other stuff I loved: STAGE MOM [One mouthing words behind a curtain, perhaps], FUR CHILD (although I think this is more commonly seen as FUR BABY?), the inclusion of the full song title of perpetual crosswordese Anka song ESO BESO, the clue on GLUES [Goes “Krazy”?] and FAWKES [Guy with a mask?].

Overall, I really enjoyed this puzzle. And it brought me to the music video for SIDE TO SIDE which is VERY fun. Many stars from me!

I finished the puzzle without realizing what the theme was. It was then that I glanced at the title and all fell into place. Each theme entry is a phrase whose first word is also the first name of a well-known “Ms. Jones.” 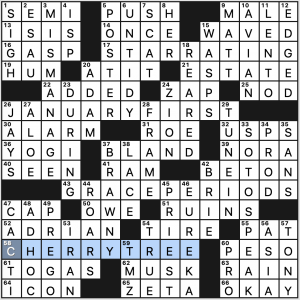 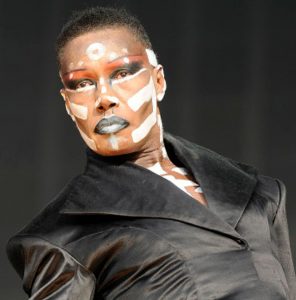 What I like best about this theme is that the first names are all common words, but not common names. This made for a nicely opaque theme until the title provided that satisfying aha moment. Well done!

The fill is not so shiny with only “SO TO SPEAK” providing sparkle, but there are plenty of strong 6s: EUREKA, TUNE IN, BRAWNY, and ADRIAN.

I quite enjoyed this theme once I realized what was going on. 3.6 stars.