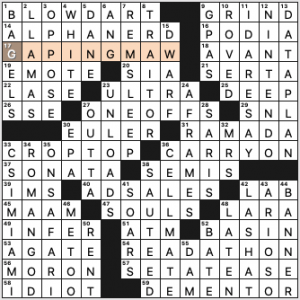 Okay! I turned off the solving timer because we’re watching RuPaul’s Drag Race here. Perfect accompaniment to the Saturday puzzle, which didn’t feel too, too difficult, just challenging enough.

Highlights: I love a good GAPING MAW any time. That opening corner stack with a BLOW DART and an ALPHA NERD, with rock-solid good crossings, is cool. Actually, all four corner stacks are impressive: I DARESAY, NINTENDO, DATAPLAN; CSI MIAMI, Pluto the ROMAN GOD (not to be confused with Pluto the DWARF planet elsewhere in the grid), and ON SAFARI; plus a READATHON (tell us what book you’re currently reading, if you can focus on a book these days), SET AT EASE (man, would I like to be set at ease), and a Potterverse DEMENTOR. ONE-OFFS, CROP TOP, and much-needed REM SLEEP also appealed.

Did not know: 48a. [Nymph who divulged Jupiter’s affair with Juturna, in Ovid], LARA.

What else? 38d. [Like mushrooms and shrimp, often], UNEATEN, obviously. Wait, that’s just on my plate. The answer is apparently SAUTEED.

4.2 stars from me. Be well! Take a walk this weekend if you can do so without hitting any crowds. 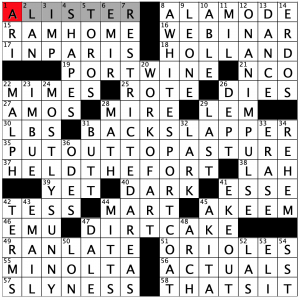 Jammed through this one. I don’t believe I have ever met Brian, but I have done several of his puzzles over the years, and they are always well done. This one is no exception. The constructor in me thinks this puzzle started with the entries in the middle, but that is a question I would love to ask Brian! 4.5 stars for this one.

Keep doing those puzzles! I am including jigsaws, which I have done a couple of during this quarantine. I plan on doing more this weekend. 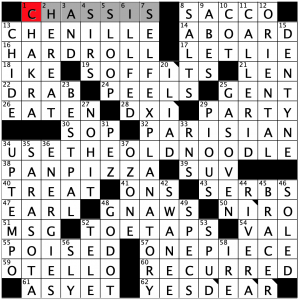 I can never tell if Stan is going to stop using pseudonyms! He had a recent Stumper with his own byline recently, and I thought that had signaled a change. But I think that he uses his byline quite often. I don’t always have time to do every LAT puzzle, but I have seen him use his byline there many times. (And by byline, I mean “S.N.”) But for Stumpers, maybe the pseudonym has to do with how hard the Stumper is. “Lester Ruff” may denote a slightly easier puzzle, while “Anna Stiga” has a slightly higher degree of difficulty. Perhaps I will ask Stan in person: in September, assuming this madness is over by then! I got this one done in just under 15 minutes after a pretty good start, so I would not class this with the hardest Stumpers, but still quite a challenge. There are a few error marks in the grid image above; they were all stupid errors on my part. I think I need new glasses! 4.3 stars for a solid puzzle.

Everyone have a great weekend and continue to stay safe and healthy! 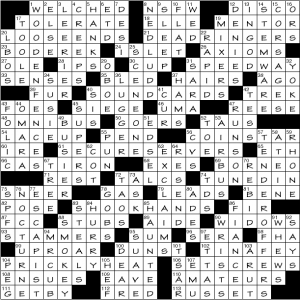 55d [Any of this puzzle’s theme answers] PUN. Of the occupational variety.

Aside from some seemingly random commonalities I don’t see a deeper tie among all the themers beyond the jobs thing—not that one is by any means required.

So. A solid if not thrilling offering.