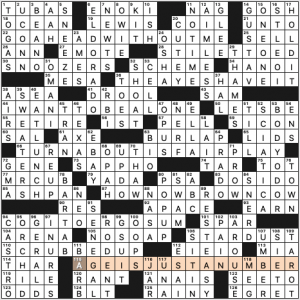 Hey, hey! It’s Team Fiend’s own Jim Peredo! For his theme, Jim takes phrases that connote some sort of remarks, and interprets them in a literal fashion as something one might say:

Interesting theme, and the entries Jim chose are all excellent fill unto themselves. The title is aptly chosen as well.

I won’t take much time on the rest of the puzzle since it’s so late. Flagged a few things while solving:

Likes in the fill: SAPPHO, MR CUB, SCRUBBED UP (though surgical teams scrub IN rather than UP, no?), the aforementioned STARDUST and SCIATICA, CASTRO clued via Julián.

Dislikes: ASHPAN, variant CUTEY, ST LEO I (are Roman numerals used with saint names? can’t help feeling the answer is no, that all the Pope Leos who were beatified just joined the ranks of Saint Leos).

THEME: Academic courses are given an extra letter, and clued wackily. 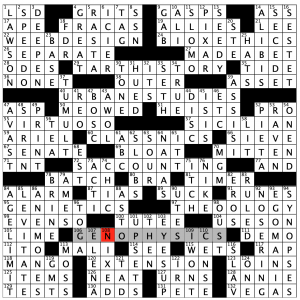 I can’t believe how long it took me to see the theme. I really needed that revealer- which isn’t a bad thing at all, as it provided the AHA moment AND it helped me figure out some areas of fill that I was having trouble with. That’s what I like most in a puzzle- when the theme aids in determining the fill.

It’s a theme idea we’ve seen before from Evan- I daresay it feels like a theme that belongs to Evan: Added/Missing letters make ridiculous theme answers and those letters later spell the revealer. But I always like them. I especially enjoy the absurdity of the cluing. My favorite of this bunch being the bisexual ox. Yes, some of the theme relies a bit too heavily on unfamiliar names imo, and the clue for CLASS NICS is struggling to make the answer coherent, but again, once the theme is grokked, it’s easy to see both the classes and to determine the extra letter that may be missing from names like THEO, GENO, and WEEB. You can’t cry “Natick!” at LAWSON/WEEB because eventually, you’ll figure out WE(e)B DESIGN.

And either my brain started to give up, or the bottom half was significantly harder than the top half. Anyone else experience that?

It wasn’t until about halfway through the puzzle that I looked up at the byline. Then I thought “Oh… that’s why.” That was in response to my so thoroughly enjoying the cluing and fill of this puzzle, and Evan’s attention to these details is always impressive.

THEME: The word VERB is hidden in common phrases. 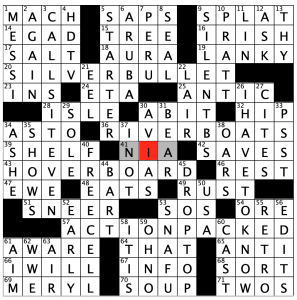 First off, the revealer in this is great. It was fun to go back and see what I missed- that each of the themers is indeed “action packed.” Dad joke for sure, but a good one!

But really, I just had a grand ol’ time filling this with clues like:

Thanks for this one, Evan. And great title too!

Enjoy this John Mulaney bit (start at about 3:20):

Paul Coulter’s LA Times crossword, “The Other Half” – Jenni’s write-up

It took me a while to figure out what was going on with this theme. There’s no revealer unless you count the title. Each theme answer is a common phrase with one word changed to be the other part of a well-known pair.

It makes more sense when you see it. 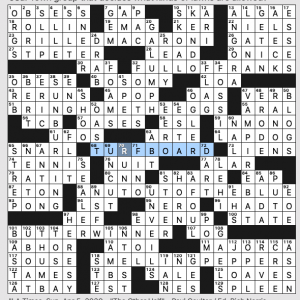 I liked this theme a lot, with the two minor exceptions noted. I enjoy themes that are consistent without being repetitive, and it was nice to have the replacement word move from the end to the beginning and back again.

What I didn’t know before I did this puzzle: see above re: FINO. I also didn’t know that the Beatles influenced J–POP.

This perfectly-titled puzzle hints that we should be looking for something valuable in the theme answers, and indeed, each entry hides a form of world currency. We get a bonus revealer at 119a [Digital asset, or a theme hint]: CRYPTOCURRENCY. I’m going to interpret that loosely as “puzzling currency.” Works for me! 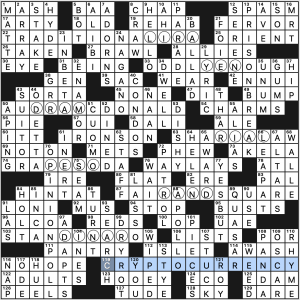 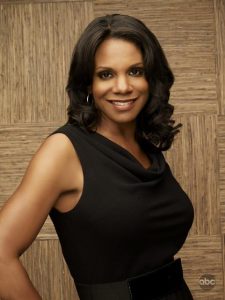 Nice, solid theme. I did the puzzle using the .puz version. Does anyone know if the printed version has the circles in it?

Lots of fun fill to enjoy as well, like PRISON BREAK (a show I enjoyed, especially in its early seasons), OPINION POLL, WAYLAYS, “YES, BUT…”, NO HOPE, NAGANO, FERVOR, DRY ROT, and QUASAR. I even like IRONS ON because it looks like IRON SON, the presumed child of Iron Man and Pepper Potts.