How many ways are there to SPEAK OF THE DEVIL? Andrea and Brian give us quite a few. Each theme answer is clued as [Another name for [see circled squares] ]. The circled squares in 38a are THE DEVIL. The synonyms: 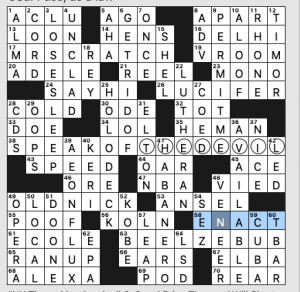 This is a fun, Monday-appropriate theme. Nicely done.

What I didn’t know before I did this puzzle: that Charlize Theron appeared in AEON FLUX.

Straightforward synonym theme for your Monday morning. Each theme answer starts with a word meaning “non-stop.” 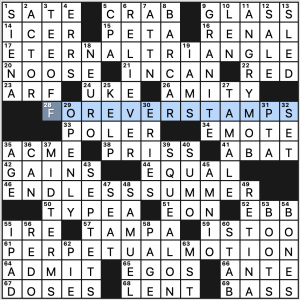 Like I said, pretty straightforward, but an excellent choice of themers making for an easy but still satisfying solve. This isn’t an original theme; others can easily be found in the cruciverb database, but I like this set.

Best bit of fill by far is the ANGRY MOB at 11d, but RELIEVER, SQUEAL ON, and MID-TERMS aren’t bad either.

Hmm. Which Beach Boys song to play us out with? “I Get Around” doesn’t seem too appropriate given the current circumstances. “In My Room” feels right for these times, as it’s about seeking refuge from the horrors outside our door (the Wilson brothers suffered an abusive father). So here you go.

Once I saw the title, it all clicked. These are phrase (not PEEK-A-BOO, mind you; it’s not part of the theme) whose four words all start with the same letter. 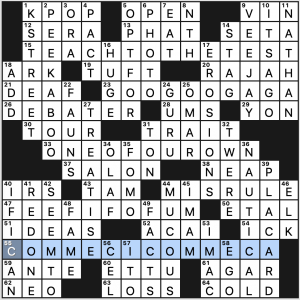 The theme works. I was just really thrown off by the baby connections.

Strange looking grid with blocks in the upper left and bottom right, but this is a hard set of themers to work with: two 14s, two 10s, and an 11.

Given that, I suppose it’s not surprising to see a fair amount of crotchety fill: SETA, UMS, ETAL, ACAI, AGAR, ORA, SEEM TO, ITO. But I did like the aforementioned PEEK-A-BOO, K STREET, NAUTICAL, PLACARD, TREATISE, and even MUCOUS (breakfast test? what breakfast test?). FOMO took me a while to remember [Anxiety you may feel on a Friday night, slangily] which is Fear Of Missing Out. This is something for the young, which I am not subject to anymore.

Construction challenges seemed to lead to a heavy reliance on crosswordese. But the theme works. 3.4 stars.

Running a little late today because (I have no excuse, time is meaningless), so this writeup will be a quick one. This was a very enjoyable, fairly smooth, slightly-challenging puzzle packed with lovely long entries and reasonably good fill, except for a couple of small things that I will list below! Quick hits today: 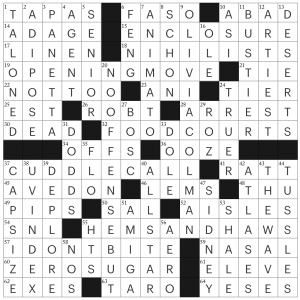 Overall, excellent (if somewhat easier than the normal New Yorker Monday) puzzle! No more ROBTs plz. Lots of stars from me! 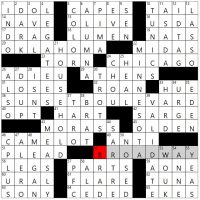 20A: OKLAHOMA [Where Will Rogers was born]
24A: CHICAGO [Where the Bulls and Bears are cheered]
36A: SUNSET BOULEVARD [Where the Beverly Hills Hotel is located]
46A: CAMELOT [Where Arthur ruled the court]
52A: BROADWAY [Where the answers to 20-, 24-, 36- and 46-Across have appeared in lights]

This puzzle felt very clean and accessible – and enjoyable and quick solve! I know quite little about BROADWAY or musicals, but I’ve heard of each of these theme entries and was able to plunk them in readily and recognize the theme before the revealer. The only odd moment was the dupe of COLOR at 5D and [Color variant] at 33A. New to me was LEGATEES as [Inheritors] – who knew?!