Theme: The final letters of certain words are doubled and added to the start of the subsequent word for crossword wackiness. 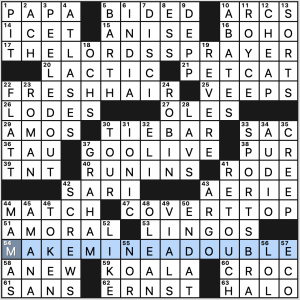 These seemed rather run-of-the-mill at first glance, and the whole theme felt really loose to me, especially for a Jeff Chen joint. I mean, there are probably a wealth of phrases one can do this operation with. Then I looked at the specific letters that were doubled: S, H, O, T. Aha! A shot is a type of drink of which you might request a double—an elegant touch that I’m afraid many might miss. But it definitely raises the level of puzzle quality.

And how about that title, “Belt Line”? A belt line is the part of the body around which a belt is placed, but MAKE MINE A DOUBLE could also be considered a line (a saying) about a belt (a drink). Kinda reminds me of a certain recent Sunday puzzle theme that for some reason a lot of people had a hard time discerning. ¯\_(ツ)_/¯ 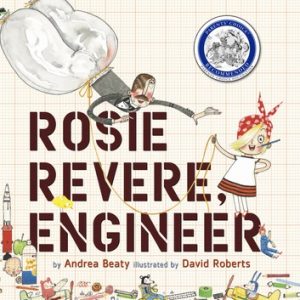 Anyhoo, super fun fill in PEELED OUT and SPORTS BRA. I loved the clue for REVERE [Rosie of kid lit who’s an engineer]. I probably heard of this book at one point (it’s a little too young for my daughter), but once I thought about the clue, I figured it had to rhyme with “engineer” and voila! It did. Not so keen on the clue for grid counterpart GRAHAM [Chair of the Senate Judiciary Committee]. [Trump toady] would’ve worked, but I’d have rather seen something to do with the cracker, Monty Python, or author Greene.

A sneakily stealthy theme with a cherry on top that I fear too many will miss. Fun fill as well. 3.75 stars.

Folks, this is the second Alex Eaton-Salners-penned Thursday NYT in 3 weeks.  That feels…oddly frequent?  Especially since he also recent had a Friday puzzle as well.  Anyways, let’s dig into this one: 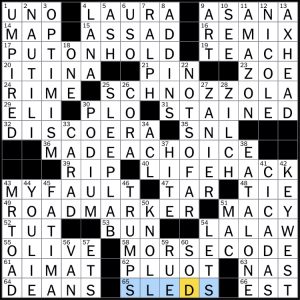 Parsing the dots and dashes in the phrasing of the clues makes their answers understandable. One dash in morse code is T, so 17A becomes “Table”, which makes sense with PUT ON HOLD, and 36A becomes “Opted” and MADE A CHOICE.  One dot is E, so “Big nose” and “Mile post” suddenly click with SCHNOZZOLA and ROAD MARKER.  I would have loved to see this pushed further – an ellipsis (…) is an S in morse code, and — is M, so there could have been way more fun to be had with the cluing.

Stereogum’s “The Number Ones” series just left the DISCO ERA of the late 1970s behind, but we’re still getting the intermediate steps dance music was taking in 1980, like Lipps Inc 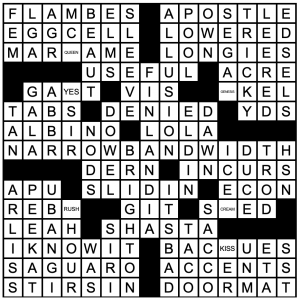 Derek subbing for Jenni for this week’s Fireball, which had me brainstorming 70s rock bands! Not sure why all of these bands are from the ’70s or so era, other than the fact that there are no cool one-name bands anymore! The central entry in the grid explains it all, and the letters in red all go in the same square. I have paired the across and down entries in order:

I stole the answer grid image from the Fireball email, as it shows, albeit small, how the grid fits together nicely. The grid image appears larger for this reason. I had only the first letters in my Across Lite grid, and it also showed I had an error since I errantly had a square in as a rebus that shouldn’t have been. Stellar execution here, especially given that these themes are all symmetrically aligned. And with all of these bands having had their heyday 40-50 years ago, this puzzle may be proof that rock and roll is dead! 4.7 stars for this week’s Fireball.

Thanks for letting me sub for this one, and I hope you enjoyed the puzzle. I’ll be back for some reviews in a couple of days. Stay safe and healthy!

A puzzle you can bank on today. And this appears to be a debut for Katelyn Glassman! Congrats!

THEME: Phrases in which the last word can follow “bank.” ***UPDATE: I screwed this up big time. Theme answers are all things one can take to a certain type of bank. Sorry!*** 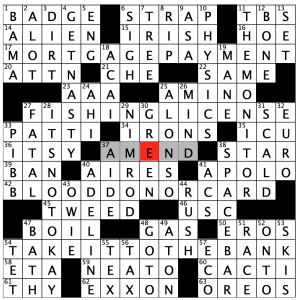 Solid set and clean theme today! I’m surprised STATEMENT didn’t make the cut as a second word… perhaps it’s too long? BANK LICENSE is a new term to me, but clearly not to everyone else in the world as it googles quite well.

Some fun stuff to boot: 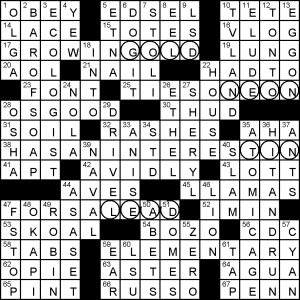 ELEMENTARY is today’s revealer, and four answers end in the elements GOLD, NEON, TIN and LEAD. The theme answers are in various forced tenses – GROWINGOLD, TIESONEON, the dictionary-phrased HASANINTESTIN – the whole theme feels forced. Maybe a looser interpretation could have made for more interesting theme answers?

Not a lot to remark on elsewhere. There are two pairs of long downs: BAROFSOAP/ECOLOGIST and ATOMICAGE/HITANDRUN. In cricket the last is the more gentle TIPANDRUN… My favourite clue was [Does some fencing, maybe], for ABET. 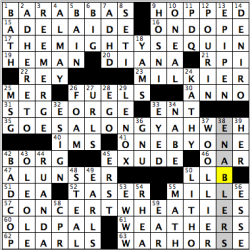 Hello there, again! Here is hoping all of you are taking all precautions and are as safe as can be right now.

If you’re not tired out from a Thursday of crossword puzzles, just say yes! Well, in this puzzle, we have some puns in the three theme entries that are created by using the syllables of words that mean “yes” in three different languages. Seems a bit tricky, but so long as you’re familiar with at least one of the words that mean “yes,” it’s not too much of a head cracker.

Did not get BARABBAS (1A: [Pilate released him]) immediately, which probably would have disappointed my Catholic school religious teachers upon knowing that, but the rest of the northwest fell very quickly, giving me an early foothold and eventually jogging my memory at 1A in the process. A couple of entries made me laugh out loud because of the source of the answers, the first being MATH and the old SNL skit with Chevy Chase playing President Ford during presidential debates (55D: [“I was told there wouldn’t be any ___”]). Though that bit of humor was before my time, the second, ON DOPE, is right in my wheelhouse when growing up in the ’80s (16A: [High as a helicopter]). I’ll let Mr. Hand take over from here…

“Sports will make you smarter” moment of the day: BORG (42A: [“Star Trek” group]) & AL UNSER (47A: [1991 Motorsports Hall of Fame inductee]) – Interesting that these two entries abut each other, given that the BORG-Warner Trophy is the name of the award given to the winner of the Indianapolis 500, the legendary Indy Car race that AL UNSER won on four occasions (1970, 1971, 1978, 1987). Unser can, literally, be called the face of the trophy, as a small bust of the winning driver  is engraved on the trophy and Unser, along with A.J. Foyt and Rick Mears, won The Greatest Spectacle in Racing a record four times.

Thank you so much for your time, friends! Have a great rest of your Thursday, and hope you have a good weekend coming up! Stay safe! Keep six feet apart from fellow citizens! Wash your hands! Stay positive…if you can!