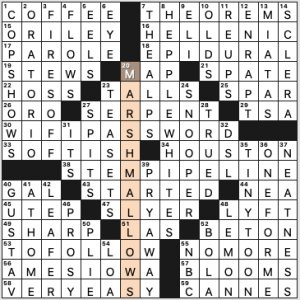 Okay! Got waylaid by chatting with a friend and doing laundry, and would you look at the time?

I liked this spinning 68-worder. Fave fill includes EPIDURAL, WI-FI PASSWORD (clue is [Deterrent to squatting], not sure what “squatting” is in Wi-Fi terms), the STEM (sci, tech, engineering, math) PIPELINE, COP SHOWS, FIRES OFF, MARSHMALLOWS (though the grody little things in breakfast cereals fail to meet my marshmallow test, they are an abomination), THE ALPS (worlds better than a singular ALP as an entry), and TINY TOON.

In the “WTF is that?” category, we have 8d. [Classic chairs with shield-shaped backs], HEPPLEWHITES. Here’s an explanation of that. Today I learned that I have no Hepplewhites.

Never even saw: 26a. [Material in doblones], ORO. I’m guessing doblones is Spanish for (gold) doubloons. 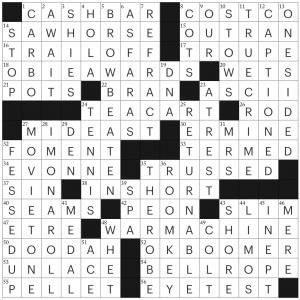 This puzzle was a *breeze* in two ways: I flew through it, and it was also cool and refreshing. There was a nice mix of new stuff (like TRUE CRIME podcasts… although I guess Serial was somehow six years ago now! Taking recommendations for new TRUE CRIME podcasts in the comments) and old stuff (like MOVIETONE and THE ROBE, to which I say OK BOOMER). (Just kidding, I would never say OK BOOMER to Patrick Berry. Or anyone.). 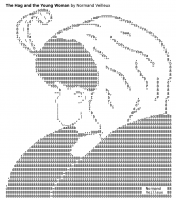 Overall, I guess I don’t have a ton to say about this puzzle. It’s a nice smooth easy themeless puzzle, and I enjoyed it! Plenty of stars from me.

Another wonderful debut from the Inkubator – and after this one, looking forward to future puzzles from Emma Oxford!

THEME: While this puzzle is officially themeless, there is a very impressive twist. 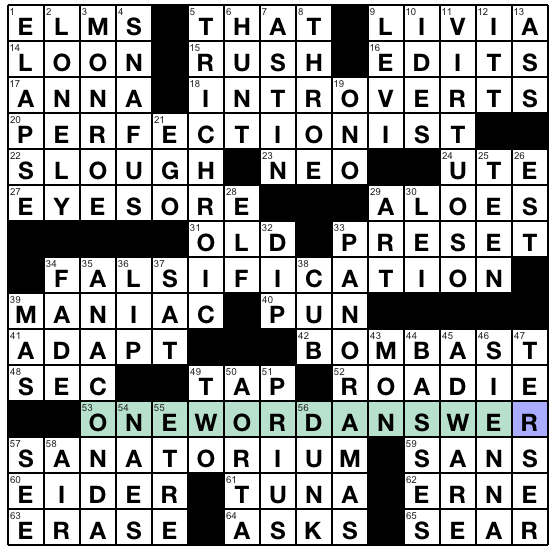 Fun themeless puzzle today didn’t notice it while solving, I was very impressed seeing that aside from that, all of the answers were single words. Quite a feat.

Smooth puzzle, particularly with such limitations. TRICHROIC was the hardest answer for me to get to – I needed all the crossings in CHROIC. I’m not sure I’ve ever seen THROE in the singular – but it works.

I’m always a fan of ROADIE [Band aide?] PUNs so that made me smile while solving. Good timing on 18-Across, since we’re all kind of forced INTROVERTS now. A lot of answers here that I just enjoy as words, like VIRTUOSO, SNAFUS, and BOMBAST, kept me going throughout the grid. As long one-word answers, FALSIFICATION and PERFECTIONIST both have fun letters to play with and kept it interesting.

Each theme answer spans the grid and each adds ER to a base phrase. 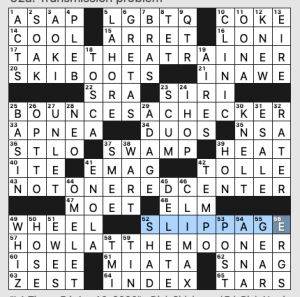 Not a bad theme. Also not a great theme. I’m impressed that Dick found four 15s that fit the formula.

What I didn’t know before I did this puzzle: that LAHORE is the capital of Pakistan’s Punjab province, and that IHOP has the same corporate parent as Applebee’s.

WARP DRIVE is our theme revealer (57a, [Theoretical spacecraft system, and a hint to the circled letters]), indicating that the letters in DRIVE are “warped” in the other theme answers (i.e. scrambled). 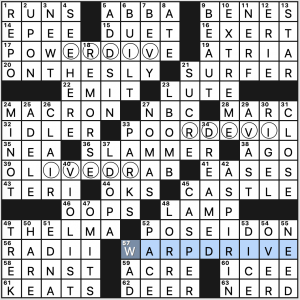 Fairly standard as these types of themes go, but the entries are solid and lively, if on the shorter side. There are the added bonuses of STAR and TREK (13d, [With 49-Down, classic sci-fi show featuring 57-Across]), which is a nice touch, especially for those of us who are of the NERD (63a) persuasion.

In the fill, I’m liking ON THE SLY, POSEIDON, EXTREME, VIOLIST, REMORSE, ASPIRIN, “SEE HERE!”, CASPER, the SLAMMER, and the L-BOMB. No doubt, having four shortish theme entries allows for the fill to shine, but it still takes some work to get there. Nicely done!