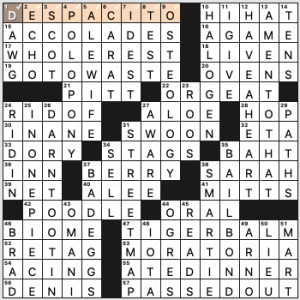 Showy 68-word grid with those quad-stacked 9s, eh? My fave fill here includes DESPACITO (though I hadn’t heard the song till today … the video below has 6.7 billion-with-a-B views). ACCOLADES that accrue to Wyna and Erik, ORGEAT just because, TIGER BALM, ATE DINNER and PASSED OUT with a full stomach, emerging IN ONE PIECE, DARN TOOTIN’, and BAIL BOND (35d. [Possible instance of predatory lending]).

I found this one to be much tougher than the typical Universal! But an interesting solve for sure. There’s quite a bit going on.

THEME: Shape shifting in more than one sense: Theme answers are anagrams of shapes, and the black groupings of squares morph on a diagonal. 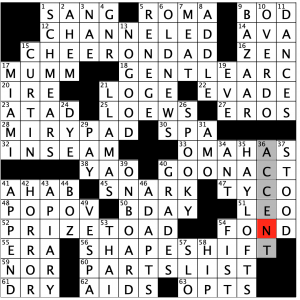 That’s quite the feat to squeeze all that and with attention paid to the black groupings in a 15x. It took me a while to see what was going on, and the revealer certainly helped.

We’re in themeless word count territory with this one (72), and the grid feels strained at times. Coupled with the bizarreness of the theme entries, this might have some scratching their heads. As to that bizarreness, I actually prefer theme answers of this type to be more over-the-top in their wackiness (ala WaPo). CHEER ON DAD and “GO ON, ACT!” are my two favorites.

I can’t say I fully understand the reference to the shifting of the black squares. Was that serendipitous? Or intentional? I suppose it doesn’t hurt! Still, the second half of the revealer clue was a little mystifying for me. 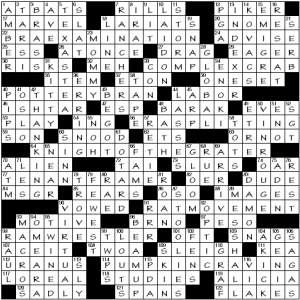 Fine if modest theme. I’m satisfied with it. Note that there are plenty of ARs and RAs throughout the grid—eliminating them would have been an incredible tall order. 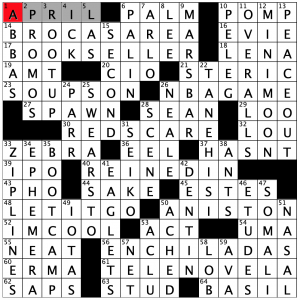 Smooth sailing for this Saturday’s LAT challenger themeless. Still hoping to meet Debbie soon! Lots of great answers in this one, so we will just get to a discussion! 4.6 stars today for a great puzzle!

I will stop here, but I could go on. I have jigsaw puzzles to do! 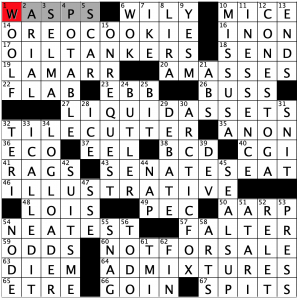 The last Greg Johnson Stumper didn’t give me too many fits. I cannot say the same for this one. My excuse? It has actually been a rough few days at work! I was getting used to sitting around in self-isolation, but I am now on a semi-regular work schedule. That is lame, but that is my story and I am sticking to it. The progress here was steady, just really slow. First toehold was in the SW corner, and I finished somewhere in the middle of the grid. 38A is really vague, but I distinctly remember smiling and wincing once I got that one. (See below!) Great puzzle all-around, though, but it seems as if I cannot do these unless I have absolute and total concentration. I put my headphones on halfway through and that helped! 4.5 stars for another stellar puzzle by Greg.

Have a safe and happy weekend!