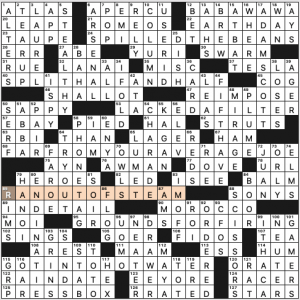 This sort of theme is one I associate with Merl Reagle: A story unspools through the theme clues and answers. (I think maybe Merl’s tended to have a larger number of shorter themers?) Joel’s rendition imagines training day at a Starbucksy coffee joint:

So that’s two themers I liked a lot, one that works just fine, and four that felt off to me.

Fave fill: PHONE TAG, actor ADAM SCOTT (but not the golfer), EARTH DAY (that DAY is duped by the ESS clue), STEALTHY ninjas.

This puzzle brings with it a shift in expectations.

THEME: Movie titles are “shifted” within common phrases and the new phrase is wackily clued. 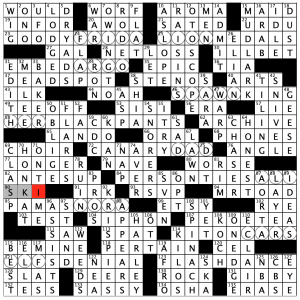 Wow! I found this one much more difficult all around than normal, but I enjoyed the heck out of it. Some things I confess I didn’t notice until post solve (I did solve groggily): 1) The movie titles. This is clear as day, especially with the circles and the title, and for some reason I missed it. I don’t think I’m familiar with Dad or Spawn, but still… I shoulda noticed. 2) The relevance of the revealer. Oh, so that’s why the second part of the clue talks about “steps” taken in each answer. May still be somewhat of a stretch, but it’s clever for sure.

Again, one of those themes where the fill and the theme answers synergistically work together. Sometimes I could get part of a theme answer, which would help crack into the fill, which in turn would help reveal the other part of the theme answer. I love it when puzzles work like that.

Very clever and lot of fun. Thanks, Evan!

Good bang for the buck in this one. 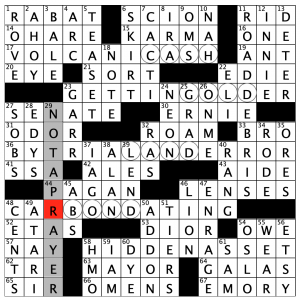 This puzzle could also be titled “Things you don’t have” and be perfectly applicable to me!

Anyway, a strong basic theme and a very accessible puzzle, especially for newer solvers. That’s what I like and hope for in a Universal. Of course, it’s bothersome that they still can’t figure out how to circle letters in their web app and print forms, which – and I’ve seen this – creates a frustrating experience for newer solvers who are asked to count boxes and make their own circles, but I hope people are getting accustomed to that.

ROAD DEBRIS and NOT A PRAYER round out a nicely filled puzzle. 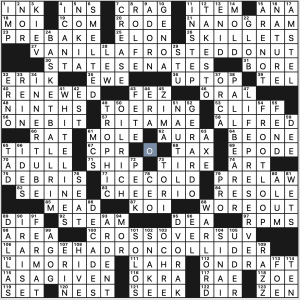 There’s also the lone central square which gets clued at 67a along with CPR: [Emergency pumps? (Clue for middle square: Circular letter)]. That square gets the single letter O.

This was fun. Definitely something different. Sure, there’s a little extraneous stuff like the VANILLA FROSTED part of VANILLA FROSTED DONUT and the TOE in TOE RING, but symmetry needs must prevail. And even though it’s weird to see a singular CHEERIO and FROOT LOOP, they make sense with the theme.

I love the grid’s isolated central donut shape. I started in the NW and worked my way systematically counter-clockwise around the grid. Once I got everything outside the circle completed, I attacked the center.

Everything flowed smoothly and there’s a glut of good fill in here, even with so much theme material (including some stacked theme entries!): STATE SENATES, NANOGRAM, SKILLETS, ICE COLD, WORE OUT, CROSSOVER SUV, LIMO RIDE, WHITE LINES, PALLBEARER, WARLORD, FERMAT, and DVOŘÁK.

Those stacked entries in the East/West are responsible for some of the clunkier fill like BE ONE, EPODE, and A DULL, but really, if that’s the only price to pay, I’d take that any day. Really top notch filling in this grid.

Cluing felt pretty straightforward which accounts for my relatively zippy Sunday time. I did like [It’s exciting to take a back seat during one] for LIMO RIDE, and [Bottom feeder?] for UDDER.

Wonderful puzzle. 4.25 stars from me.

I filled in part of the first theme answer, glanced at the title, and immediately knew where we were headed. Each theme answer is missing UR from a base phrase. 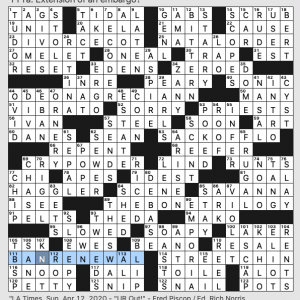 I enjoyed this theme. It was just right for a mellow Sunday.

What I didn’t know before I did the puzzle: that Shaquille Oneal won the NBA MVP award in 2000. I did know he was a LAKER. I also did not know that Salvador DALI helped Alfred Hitchcock design the dream sequence for “Spellbound.”