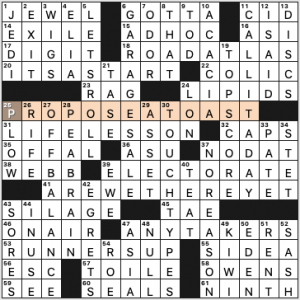 Dang, this one was fast! If you were hoping the puzzle would eat up lots of spare housebound time (me, I don’t have extra hours to kill, since I’d been working from home all along), so sorry, somehow this crossword was not the one that was going to drag things out for hours. Played like a Tuesday for me, go figure.

Robyn’s packed this JEWEL of a puzzle with lots of spoken phrases. The crossword has struck up a conversation with us. IT’S A START, right? I’d like to PROPOSE A TOAST to the primary ELECTORATE and our stalwart RUNNERS-UP who ran a good campaign. “ANY TAKERS?” Come on, folks—LET’S ROLL.” What’s that? You’d rather CALL IT A DAY than go out? Why are you so tired? “NO REASON.” (There’s also “ARE WE THERE YET?”)

Clues that popped out:

This puzzle was a delight from the very first clue/entry pair. “Baby showers?” for DRIZZLE has got to be the cutest pun I have encountered in a long time, and from now on I propose we all refer to DRIZZLE as baby showers. That this crossed the Bruno Mars weather forecast IT WILL RAIN was a just a cherry on top of this adorable corner that also includes ZEBRA MUSSEL and LUANN and ROWBOAT. 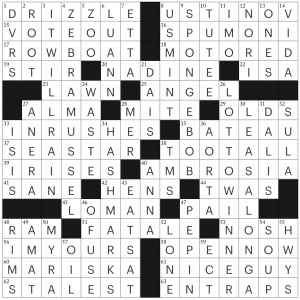 Other good long stuff included LOTTO WINNER, HASHMARKS, and SPONGEBOB (which is a cartoon I dislike but an entry I appreciate!). Going back through the puzzle, I can find very little to critique here. I loved SPUMONI! I loved MARISKA (after whom I named one of my d&d characters in the two online campaigns I’ve started since the world shut down)! I once met a Harlem Globetrotter nicknamed TOO TALL who was 5’2, so even though I didn’t know Ed Jones, I knew the nickname! This puzzle really perfects the New Yorker’s signature blend of high culture (Matisse’s Le BATEAU), pop culture (Ariana Grane’s “God IS A Woman”), word play (DRIZZLE!), and miscellaneous fun trivia (White Monopoly bills for ONES— a unique and fresh clue on an otherwise kind of tired entry).

Overall: all the stars from me, I adore this puzzle, and clearly I will take any excuse to embed an Ariana Grande video in my posts. Have a good day everyone!

Each theme answer ends in a word that is a homophone of either “buy” or “sell.” 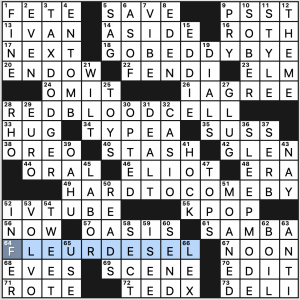 Cute theme. It’s hard to know what advice to listen to! It’s especially tough right now when the market is undergoing unprecedented uncertainty. Should we have gotten out already or do we get out now or do we hold on and hope we’ll make a relatively quick recovery? Who knows!

I struggled right off the bat at 1a because I don’t recall ever seeing [Wine and dine] as a definition for FETE. The other one I really didn’t know was FENDI [Rome-based fashion house]; I don’t think I’ve ever heard that name at all. But those were my only real hang-ups. Everything else flowed smoothly. Of course, Zhouquin always brings us fun, fresh fill like TAX DODGER and SLEEP MODE.

Fun little theme and solid grillwork all around. 3.8 stars.

If I’m going to play hide-and-go-seek, I’d rather be outside. I had no idea what was going on with this theme until after I finished the puzzle and went hunting. When I figured it out, it was more of an “oh, that” moment rather than “aha.”

The central entry is 36a [Acknowledgement of success–four are hidden in this puzzle, each adjacent to a black square] and that’s a ROUND OF APPLAUSE. The directions are very specific. On the one hand, I’m not sure I would have figured it out without the part about the black squares and on the other hand, it made it more like a kid-level connect-the-dots than a grownup puzzle.

The word CLAP is spelled in the squares surrounding four of the black squares, like so: 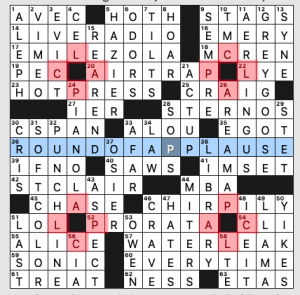 The letters move around, which is a nice touch. It’s not a particularly satisfying theme. The four CLAPS along with the 15 in the middle force some unpleasant fill. I’d be perfectly happy if I never saw OSIER in a puzzle again. There’s also plural STERNOS, Roman numeral math, –IER, and IF NO, filling in “What if ____ comes?” LIVE RADIO is a bit roll-your-own. I’ve been watching a lot of HGTV as part of my news avoidance strategy, so I know SOFT COLOR is a thing. And then there’s rapper MCREN crossing a vodka that could be either GRAY or GREY. I would have gotten that wrong if I’d done it on paper, since I started with A. When I didn’t get Mr. Happy Pencil, I went looking and decided to change it, but I wouldn’t have known otherwise. Again, rapper names are perfectly fine entries. Like all names, they need fair crossings.

A few things I actually liked:

What I didn’t know before I did this puzzle: never heard of “Les Rougon-Macquart,” although I know who EMILE ZOLA was. Also never heard of sportscaster CRAIG Sager. Wikipedia tells me he was a basketball guy, and I am not a hoops fan.