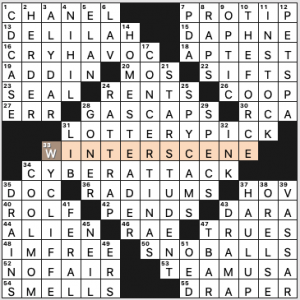 This pinwheel grid’s got 66 words and a bonkers diamond of words in the center. It looks cool and must’ve taken both brute force and finesse to pull off. It was also easier than I was expecting, more of a Friday-grade difficulty.

Favorite fill: sports LOTTERY PICK, a WINTER SCENE like Friday’s in the Midwest, Hostess SNOBALLS, WYCLIFFE just because it’s a cool-looking name, THE FORCE, and the highly coveted IN STOCK (we are all beset by out-of-stock notifications on the grocery items we were hoping for).

Women in the puzzle: Coco CHANEL, biblical DELILAH, cartoon DAPHNE, DARA, TEAM USA referencing the USWNT (who are generally called the USWNT rather than TEAM USA, no?), generic COOL MOM. RAE usually is clued via a woman, but novelist Chang-RAE Lee is a good change-up. Boxed-up men: Monet, fictional DOC and ROLF, Nero, generic NEIL, and John WYCLIFFE. DRAPER is clued as a regular noun rather than the TV character on that show I never had any interest in watching.

If you’re a kid at heart, this puzzle’s for you.

THEME: Synonyms for “child” are hidden within common phrases/names 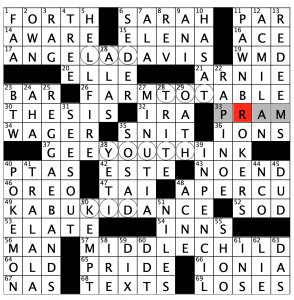 As long as you were solving in Across Lite and not IN PENCIL, there was little not to like about this puzzle. If you were solving IN PENCIL, it’s likely the puzzle was asking you to count letters and circle the squares yourself, which is fine for veteran solvers, but is asking too much of a new puzzler. Someday, Universal is going to figure out how to circle its squares when the theme calls for it. Just not today.

Fun mistake for me was trying to enter PIANO BROKERS in for PAWN BROKERS [They may give you C-notes for instruments]. I mean… sure! Yes PIANO is too many letters, but somehow I didn’t notice that and really fudged the spelling of PIANO and ended up with IED, which looked just fine instead of WMD. Doh! Laughable moment when Mr. Happy Pencil didn’t appear and I had to go clean that mess up.

Solid phrases throughout in the theme. Great title. Great revealer. And as long as you turn a blind eye to the APERCU/RAPIONE crossing, great fill! 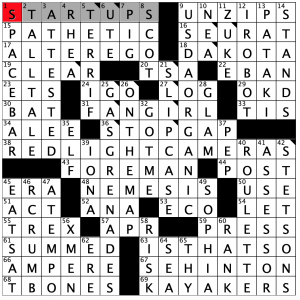 Yes, I was Stumped this week! I found this one quite tough. Also, my job is part of the “essential” jobs, even though it is office related, and I have been working weird hours, so I am exhausted. I know this sounds like a lame excuse for a bad solve, but that’s because it is! I am slowly learning that unless it says “Lester Ruff”, Stan is going to have a beast of a puzzle. 4.2 stars this morning.

Here is a quick rundown (see the last part of this post to see why!):

I could go on, because there are a ton of great clues here. There is an online NPL convention today, which is nice since the real one may be up in the air for July. Maybe I will see some of you readers later today online there! 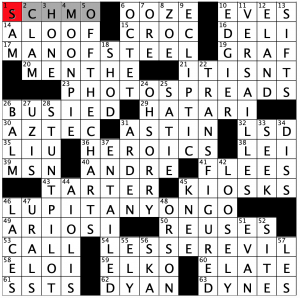 Facebook friend Mary Lou Guizzo has this week’s Saturday LAT challenge puzzle. Took my slightly longer than it normally does, so I will call it a true challenge! By clever clueing, you almost could tie 23A and 46A together to make a very loosely themed puzzle (I am sure LUPITA NYONGO has been in several PHOTO SPREADS over the past few years!)

Have a great weekend! And stay healthy! 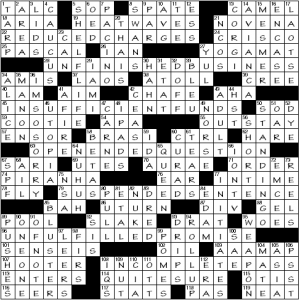 Solid, straightforward theme: take an in-the-language phrase and literally interpret it typographically. Clue in an appropriately abbreviated fashion, which itself is should be an unrelated word.

Good set of hefty themers. Too bad one of them—the central entry, no less—gets a minor ding. Say. will I end the write-up with Liszt’s Symph? Read on (or skip ahead) to find out!