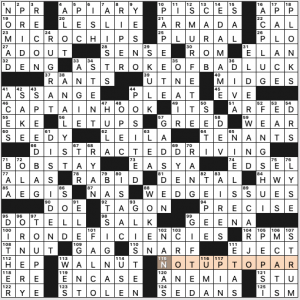 Golf is not my favorite topic, so a theme of golf-related plays on words isn’t really up my alley. We’ve got various phrases and words redefined in a golf context. And a duffer, apparently, is someone without a lot of golf skills. If you’d quizzed me, I’d have thought it was a term for any golfer, not specifically a bad one.

The theme’s consistency is good—the “all NOT UP TO PAR” angle. I just don’t get into golf, and golf terms like CHIP and WEDGE aren’t things that resonate. Unless! Unless you are talking about potato chips and potato wedges.

Toughest crossing: 71a. [Rope holding down a bowsprit], BOBSTAY (say what??) and 43d. [Piece of training equipment in boxing], SPEED BAG. I neither box nor sail. I’m sure I’m not alone in that.

Our dinner has arrived early, so gotta go. Some nice fill here. 3.75 stars, I guess?

A classic theme and a classic title today. 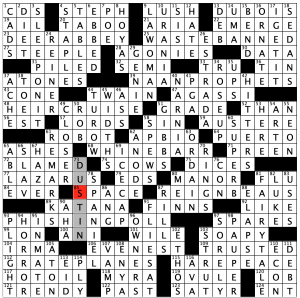 A gentle, accessible puzzle, perfectly placed amongst some of the curveballs of the past weeks. I always enjoy when Evan embraces the absurdity of the clue/answer pairs rather than trying to find ones that sound a bit more plausible (See NAAN PROPHETS, WHINE BARR and REIGN BEAUS!). I had to stop at HEIR CRUISE and say it aloud a few times before I cam up with Air crews as its homophonic partner. I think the plural of Crews threw me off, but that’s the one I least enjoyed uncovering.

Nicely filled with any names that might not be in the solver’s wheelhouse fairly crossed, though I must admit I screwed up LAZARUS, DUSTIN, and KATANA by filling in LAZARES, DESMIN, and KAMANA. All three of those looked fine to me! Hehe. I keep forgetting I’m supposed to watch Stranger Things.

I needed every crossing for EVENEST… I couldn’t see that one at all. But… does anyone say that?

Overall, a fine, playful puzzle for a fun Sunday solve.

THEME: Phrases where “FALSE” can precede the first word. 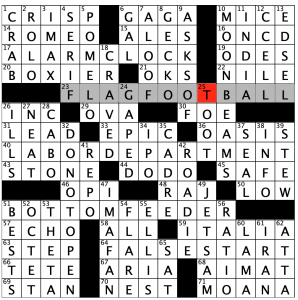 A fine Universal today, very cleanly filled with a very accessible theme. “False flag” and “False labor” were somewhat new to me, but as I was googling each I realized what they were. Those terms were both sitting on the edge of my everyday vocabulary, waving from a distance, asking to be noticed. That is not saying anything negative about their use in the puzzle – they’re both perfectly fine – just that I couldn’t immediately snag them.

MOONBEAMS and DO NOT OPEN make for nice longer downs. You can even make a sentence out of it as if you are talking to multiple children with the same name in the Hippie Era: “Moonbeams, do not open!”

As the title suggests, something is missing from half the theme answers. We can answer the question by looking at the other theme answers. 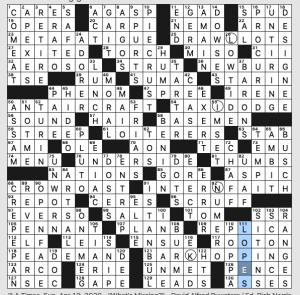 I like this theme, which is a fun variation on the drop a letter/add a letter idea. I do not like the circles. I’m not a huge fan of circles in my puzzles anyway, and here they rob us of any real “aha” moment. I know Sunday puzzles have to be accessible to casual solvers, and maybe I’m just living in my own little crossword bubble, but I think this theme would have been solvable by normal people without the circles. I also do not like “Indefatigable” showing up in a clue when METAL FATIGUE is a theme answer. This would have bothered me anywhere in the grid, but it’s especially egregious when they’re nearly right next to each other.

A few other things (note to self: do not go for a two-mile walk between solving and blogging, or you will forget what you were going to write):

Wow. I guess I really didn’t like this puzzle very much, even though I mostly enjoyed the theme.

What I didn’t know before I did this puzzle: that Thomas ARNE wrote “A-Hunting We Will Go.” Since it was written in 1777, I don’t feel too badly about that. I also did not know that Meryl STREEP has 21 Oscar nominations, or that this is a record number.

Theme: Before-and-after entries featuring two-word desserts all clued with the angle of trying to decide which dessert to purchase.. I’m hungry. 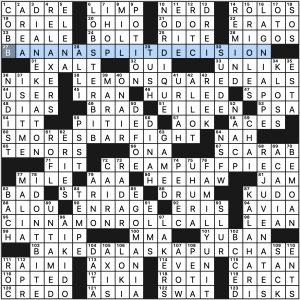 Despite my nits, these are fun entries. I like the consistency of focusing on a dessert purchase. Before-and-after themes often make for good opportunities for humor, and there is some here, though maybe not the lol kind.

Loads of bright and shiny long fill in this grid with DIANE KEATON, LOBSTER BIB, RELAXERS (clued with respect to hair, not generic idling persons), NORDIQUE, “IS IT ME?”, “I DON’T BITE“, EGOMANIA, FAMILY UNIT, HAT TIP, AIKIDO, the LAKERS, and KALAHARI. If you’ve ever been to New Orleans and/or Mardi Gras, you know LAGNIAPPE [Small gift for a customer] which generally equates to “free stuff.”

Did not know MIGOS [“Bad and Boujee” trio], nor ERIS [Apple of Discord thrower], nor KLOSS [“Project Runway” host Karlie], nor PEREC [Author of a novel with no E’s (although this answer has two)]. Pretty sure I’ve heard of this last book, but it sounds like it would be torturous to read. Anyone with any first-hand knowledge of it?