I do like Lynn Lempel’s Monday puzzles. They are silky smooth and Monday-accessible and the themes are still fun. This is classic Lynn.

I figured the theme had something to do with a word that went with each theme answer. I didn’t figure it out until the revealer, which is at the bottom of the puzzle where God intended revealers to be. 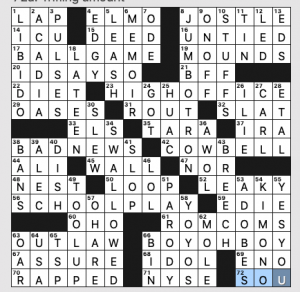 And the revealer: 66a [“Wow!” … and a hint to both halves of the answers to the starred clues]: BOY OH BOY. This also describes my reaction to seeing Lynn’s name on a Monday puzzle. So we have BALL BOY, GAME BOY, HIGHBOY, OFFICE BOY, BAD BOY, NEWSBOY, COWBOY, BELL BOY, SCHOOLBOY and PLAYBOY. All the theme phrases and all the “boy” combinations are solidly in the language. Nice.

What I didn’t know before I did this puzzle: that EDIE Falco won Emmys for two different series (the other one was “Nurse Jackie). I also did not know that Brian ENO coined the term “ambient music.” 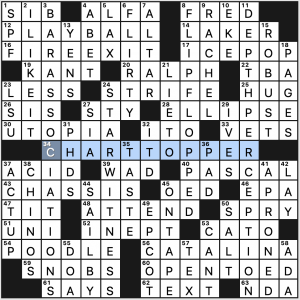 I just realized the revealer crosses all four of the other theme answers. That’s just bonkers! I don’t think I’ve ever seen that before, and I have to say, it’s really impressive how unnoticeable it is. Very smoothly executed!

And there’s lots of strong fill—enough so that I wasn’t sure where the theme was until I hit the revealer. There’s “PLAY BALL!” stacked on FIRE EXIT, UTOPIA, PASCAL, CHASSIS, CATALINA, and FLIRTY. In a word, I LIKE IT!

Hey folks. This is a debut, so congratulations are in order! This is an impressively executed theme and grid with an 11-letter central revealer crossing all four other themers and plenty of fun fill to boot. Nicely done! 4.25 stars. If it wasn’t for that one clue… 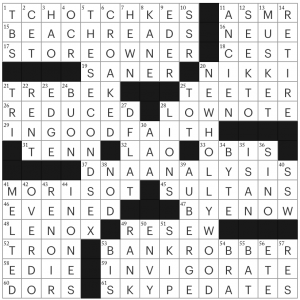 I had a pretty dreadful solving experience with this puzzle which was almost entirely the fault of my social distancing partner, who spilled a whole bottle of carbonated water on me and my laptop while I was solving, and not the fault of the constructor (with the exception of one rough corner that I’ll mention later), so I was worried I wouldn’t be able to write a fair review. BUT THEN! I did some research to better understand what was going on in the SW corner, and my mood entirely shifted and now I am thrilled to be able to present a mini art history lesson in the middle of my puzzle write up.

But first things first: some lovely long stacks in the NW and SE of (the impossible-to-spell-correctly-on-your-first-try) TCHOTCHKES / BEACH READS / STORE OWNER and BANK ROBBER / INVIGORATE / SKYPE DATES. I’m not wholly convinced that “Some travel writing?” works for BEACH READS, which is, by definition, travel *reading,* but I liked the misdirect. Also appreciated the Bonnie and Clyde callback from NEW HOLLYWOOD. SKYPE DATES: I’m curious, are people actually using literal Skype for their social distancing hangouts? I personally have used every video communication platform *except* Skype. So is Skype like Kleenex in that we use it as an eponym to mean “video chat platform” in a generic sense? Anyways, other good long entries: THE SECOND SEX, IN GOOD FAITH, DNA ANALYSIS (which, when I saw the double-A, I thought had to be wrong. I love that kind of entry!)

Ok, Mini Art History Lesson: I had never heard of MORISOT because I am an uncultured brute, but I have now learned that she was a very talented Impressionist painter, and there are many portraits of her by Manet; apparently she was married to his brother, and they were good friends. Now, when I tried to find the painting of Monet and his family by RENOIR, I kept turning up a portrait that was by Manet instead! Weird, right? Well, some sleuthing (read: googling) turned up that Manet and RENOIR both painted the same scene at the same time side-by-side of Monet’s family while all hanging out at Monet’s garden. More impressionist friendship! So here are their paintings of the same scene. I think I prefer Manet’s, actually, but as an uncultured brute I am happy to be informed that my opinion is incorrect.

I do have a few issues with this puzzle. Namely, I think the NE corner was a tad unfair, and I think the short fill generally was kind of awful. In the NE, if you didn’t know ASMR (which I fortunately did), or if you didn’t know NIKKI Glaser (I did not, and had ILANA in there for a while), then the soup of foreign words in between (ANCIEN, NEUE, C’EST) may have eluded you. I got there eventually, but it was a struggle. The “fill I could live without” list is pretty long today: CET, HAO, OCR, KANE, EDER, SSR, (basically the whole NW!), BIS, DORS, OBIS, ISAN. Not great! I know these were all necessary to achieve the sparkling long stuff listed above, but I’m not convinced the tradeoff was fully worth it here.

Overall, however, the joy I derived from researching the things I didn’t know while solving mostly made up for the NE and the fill. Plenty of stars from me for a cultured and challenging Monday puzzle! Here’s a picture of me with Alex TREBEK, whose book comes out on my birthday, if any of you were wracking your brains for what to get me. 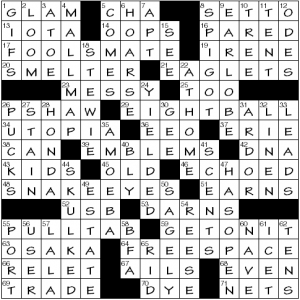 Kind of a ‘bad Monday” theme here. Not that the theme is bad, no, no, no. It’s merely a litany of terrible outcomes in various games. See? Nothing to worry about!

Tidy theme, they’re all nine-letter entries and there’s no overreach such as, say, trying to shoehorn a fifth themer into the center of the grid.

Hope your week is more auspicious than this crossword would indicate. 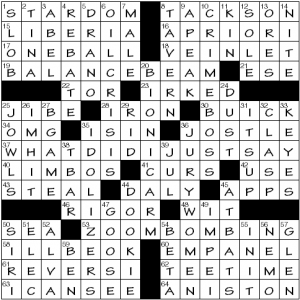 Although I didn’t time myself, experienced this as being more obdurate than the typical BEQ themeless, principally due to not being able to get a foothold in the upper half, secondarily for finishing up in the northeast section. Found the convergence of 16a [Deductive] A PRIORI (totally fair clue and answer), 18a [Small blood vessel] VEINLET (was stuck thinking about venule, arteriole, and even the far-too-long capillary), and 14d [When jamas are worn] NITE to be tough to polish off. The tricksy 12d [Mule’s underside] SOLE was another obstacle.

The strained cluing on 19a [Split level?] BALANCE BEAM and 7d [Y proprietor] MALE did not help matters in this realm.

53a [Unwarranted intrusion to a teleconference call] ZOOM BOMBING is the typical sort of trending neologism that BEQ is wont to use as a seed entry and to help keep his grids fresh-feeling. The marquee entry 37a WHAT DID I JUST SAY [Angry parent’s cry to a kid who isn’t following directions] is great colloquial fill. Another good one is 58a [“Don’t you worry about me”] I’LL BE OK. 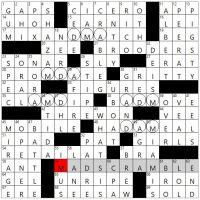 17A: MIX AND MATCH [Like a versatile wardrobe]
28A: PROM DATE [Partner for the big high school dance]
35A: CLAM DIP [Seafood-based party bowlful]
38A: BAD MOVE [Chess game blunder]
48A: HAD A MEAL [Dined]
59A: MAD SCRAMBLE [Frantic rush, or a hint to each set of circles]

Is this puzzle high? It’s is the 4/20 puzzle, but wow. Don IMUS being clued as “irreverent” instead of, you know, wildly racist, made me get out of my chair and yell “UHOH, BRO?! LOL! BADMOVE.” at the puzzle. Much less damning, but still annoying, in this puzzle: 15A’s EARN IT as a subtweet to current generations of young / middle age people who aren’t doing as well because they “haven’t worked hard” instead of, you know, having their whole economic world wrecked for them multiple times as a result of terrible actions and policies of older generations in power. We also have two ancient Romans crossing each other, as well as the color RED being clued via a woman in literature mysoginistically cast out from her society for adultery (when, if I recall, it takes two to tango). Oh, and Nazi UBOATs. Not the most joyful solve.

To this puzzle’s small credit, PROM DATE was clued in a gender neutral way and all of the various permutations of MAD were SCRAMBLEd in the puzzle.