This week we’re looking for an occupation. 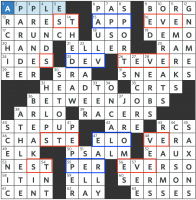 No stand-out themers here, but there is that center long entry, which is likely important, and also it is important that in the last few weeks there are now 22 million people in the US who are newly

With that central entry, and the big hint right at the start …

… it didn’t take long before I saw the repeated letters of STEVE in the grid, and noticed that there were letters “between Jobs”: APP DEV ELO PER — or, app developer, which is an occupation, and our answer. On the subject of Steve Jobs selling his VW minibus, family lore has it that my father-in-law, who was a research scientist at Stanford in the 1980s, bought a Colt Vista from a guy who worked for Steve Wozniak (the other Steve who founded Apple).

Speaking of Apple, this is pretty good: