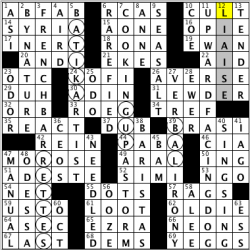 Hello there, everybody. Hope all of you are holding up OK being cooped up inside with your loved ones — human and otherwise.

Today’s crossword puzzle gives some love to a few furbabies, as four of the five theme entries, all going down, feature circled letters that spell out a type of dog breed. The catch is that those words, when read from top to bottom, are backwards, and the fifth theme entry, UPWARD FACING DOG, lets us know to read from the bottom up to make sense of the theme (11D: [“Sibling” of a famous yoga pose (and the puzzle theme!)]).

Though I was very familiar with the British funny women who starred in AB FAB (1A: [BBC sitcom with Patsy and Edna]) right away, I was completely unfamiliar with another British woman, AIRD, that intersected the former, and the spelling made me think I committed an error somewhere (4D: [Mystery writer Catherine]). Along with the entry of Aird, I was slowed by typing in “cooking up a feast” down the middle and having to untangle that last word. If you re-imagine a couple of the entries in the southeast, you have a very musical feel to that section, with OLDIE (62A: [“Golden” song from the past]), RAGS (57A: [Cleaning cloths]) and SING SING, though the people who were in Sing Sing faced the music more than anything else (40D: [Famed New York prison]). I’m far from a Yiddish expert, but know enough that the alternate spelling of TREF did not leave me second-guessing myself (34A: [Not kosher]).

“Sports will make you smarter” moment of the day: COE (10D: [Running star Sebastian)]) – Though I could have talked at length about British sporting legend Sebastian Coe, who won four Olympic medals in track and field and won the Olympic gold in the 1500 meters in 1980 and 1984, I want to mention Coe College in this space, the small liberal arts college in Cedar Rapids, Iowa (enrollment: 1,400+) that, somehow, has produced a number of influential people in the world of sports over the years. Coe alumni include Hall of Fame coaches such as Marv Levy, who led the Buffalo Bills to their run of four consecutive Super Bowl appearances in the 1990s, and Bill Fitch, who won 944 games as an NBA head coach and led the Boston Celtics to the 1981 title. Then there’s Fred Jackson, the former running back who had three straight seasons rushing for 900 yards and, in 2009, became the first player in NFL history to record over 1,000 rushing and 1,000 kickoff return yards in the same season. Coe also produced a couple of prominent African American sportscasters: Curt Menefee, the current host of the Fox NFL Sunday pregame show, and former CNN and Turner Sports anchor Fred Hickman. 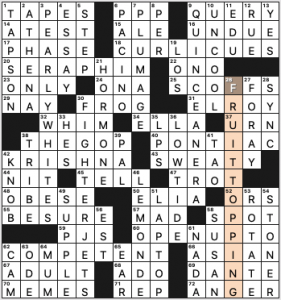 The theme revealer is 26d. [Dessert add-on … or what the answer to each starred clue has?], FRUIT TOPPING, and the five themers, all running downwards, begin with a hidden fruit:

Nice! Those fruits are so well disguised.

I got off to a slow start by filling in CHATS for 1a [Some preserved conversations], as in a customer-service chat that’s preserved, and CLICKS for 1d [Selects with a finger, as an app] … but unfortunately, those answers needed to be TAPES and TAPS ON. Oops.

Fave fill: CURLICUES! And KRISHNA, the [Hindu god of love and compassion]. We could all use some compassion these days.

56d. [Winter hrs. in Winter Haven, Fla.], EST. We’ve been back on daylight saving time for a few weeks, but some people persist in using “EST,” “CST,” PST,” etc. As if we are still on standard time. No fewer than two of my Facebook friends have this as a personal peeve, people inviting them to things in “EST” when we’re not on standard time. I can’t get worked up about it myself. We know what they mean, right? If only the two-letter ET were used to represent the Eastern time zone regardless of standard vs. daylight, eh? 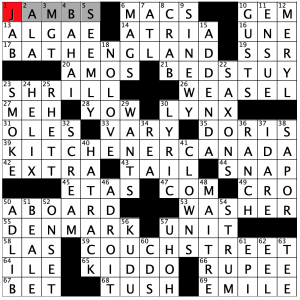 As the flavortext, let’s take a “world tour”: of a typical home!

I would think unless you are in a mini-studio apartment, you live in a space that has all of these elements: bath, bed, kitchen, den and couch. And if you are missing a den, just pretend it is the area in front of the TV! Nicely done this week. Perhaps another puzzle that is the result of self-isolation and Matt wandering around his house unceasingly? That’s my guess! 4.3 stars this week.

I will stop there! I am back to work, so I have to wrap this up! 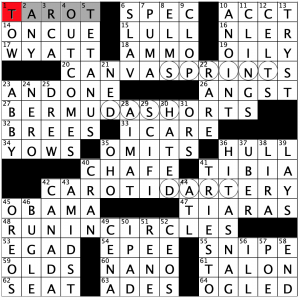 Have you ever been on a wild goose chase? That is sort of the mood that is hinted at by this puzzle’s theme! Allow me to explain by listing the theme entries:

See what I mean? We are zipping at a high pace in this puzzle, but we literally have running terms in circles. Very nicely done. Kind of how I feel at work sometimes! But who doesn’t anymore! A solid 4.3 stars for this one.

Everyone have a great week and continue to stay safe!

This power duo is back for another fun puzzle. Hopefully “Blue Notes” won’t make us too sad: 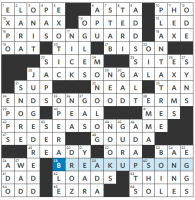 Each theme entry’s words break up the word SONG. PRI SONG UARD, JACK SONG ALAXY, etc. Nice! I liked that all of the theme entries felt fresh and the cluing, as usual with this pair, was top notch. There were also a number of fantastic women represented in this grid, including LARA Croft, ADA Lovelace, Amy TAN, TERI Garr, and Jane Austen’s EMMA. It’s also not every day that you see a grid with four Xs just casually included throughout!

The only entry I wasn’t super keen on was DR OZ, since he continues to spread misinformation and make incredible statements that surely don’t represent his peers in the medical profession. For example, he recently said it might be worth opening up schools sooner in these Coronavirus days, even if it meant that some children would die. From the linked article: [Oz] said the idea of reopening schools was “an appetizing opportunity” in light of an article in a medical journal “arguing that the opening of schools may only cost us 2 to 3 percent in terms of total mortality.” Yikes.