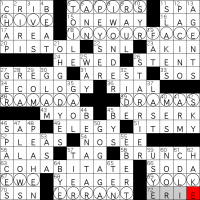 hello and welcome to episode #620 of matt gaffney’s weekly crossword contest, “Two for Two”. for this week 3 puzzle, the instructions tell us that we are looking for a body part you’ll need to solve this meta. sounds interesting. okay, what are the theme answers? there aren’t any explicitly marked as such, but i noticed a few funny clues:

in fact, there are eight clues that start with two-letter words, and every single one of them can be turned into a three-letter word by doubling the second letter. in each case, the new clue clues a different across entry in the grid. it’s really quite remarkable. from top to bottom in the grid, we have:

taking the first letters of these alternate answers, reading from top down in the grid, spells out THIRD EYE, which, um, well, is not really a body part i needed to solve this meta, but i submitted it anyway. (did you know? most lizards and amphibians have an actual third eye on top of their head. it’s called a parietal eye and is used to sense light and dark.) more figuratively speaking, “third eye” could be roughly equivalent to “sixth sense”, as in something that helps you detect the presence of something that’s not visible to normal sight.

anyway: this meta mechanism is fantastic. it feels totally original and creative, and some of the modified clues are extremely smooth and work flawlessly. some of them are less smooth and therefore more conspicuous, which is what makes this a week 3 meta rather than a week 4. it’s also just really darned impressive that he squeezed 16 theme answers into the grid. eight of them had to start with specific letters and be arranged in the correct order in the grid, and the other eight had to be related by this clue transformation. so there’s some flexibility in those, but you still need the clue to be almost the same. it’s really a marvelous construction.

that’s all i’ve got. hope you loved this puzzle as much as i did. let’s hear from you in the comments!