Theme: Ps are changed to Cs in well-known phrases, as revealed by 60a “NOT P. C.” [Potentially offensive, and the theme of this puzzle]. 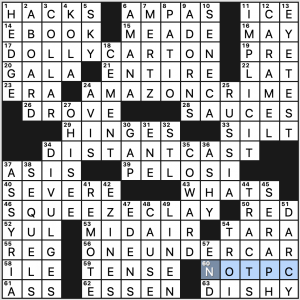 I like the last one, and maybe the Amazon one only because it’s more current, but the rest feel fairly standard as far as attempts at crossword wackiness. None was particularly lol-funny. And I think we tend to see NON-PC in crosswords a lot more than NOT PC. With the ambiguous clue [Development sites] for 44d TRACTS, that made that particular crossing a little bit ornery.

Highlights in the fill: Well, not a lot at first glance. I like “OH, I SEE,” but everything else feels workmanlike.

There were however, a boatload of crunchy clues (in a good way): 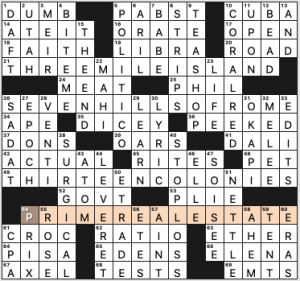 I think the puzzle was easier than many a Wednesday puzzle, but my solving reflected having a bandaid on the tip of a middle finger. (I know better than to wrangle a knife that way! I swear.)

The theme revealer is 54a. [Asset that’s all about “location, location, location” … with a hint to the starts of 21-, 26- and 49-Across], PRIME REAL ESTATE, and those three themers are geographic entities whose names begin with prime numbers:

Real life intrudes: 12d. [Droplet] as a clue for BEAD when we hear so much about droplets of contagion? No, thank you. And 38d. [Like some caps and gowns] for SURGICAL when we know that such personal protective equipment is in woefully short supply? Would have preferred a different BEAD clue, for sure. The SURGICAL clue has a great mislead (graduation caps and gowns) but … 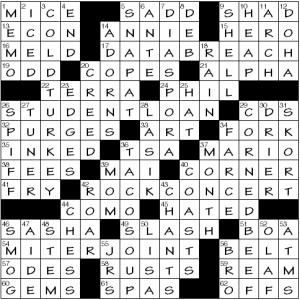 19a [Like 2021] ODD. Indeed. Unless I’m missing something significant, this minimal theme feels a bit phoned in, especially considering the standard Burnikel usually achieves.

Overall, the puzzle was an quick and easy solve, with non-tricky clues. 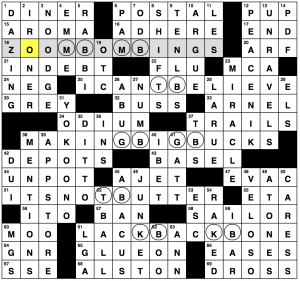 This week’s AVCX (from editor Ben Tausig) was marked as a 2.5/5 on the difficulty scale, but this played waaaaaay harder for me.  More on that in a sec, but first, let’s break down the theme:

Each of these words/phrases contains a size of computer memory (KB, MB, GB, and TB, or kilobyte, megabyte, gigabyte, and terabyte) within it twice.  ZOOMBOMBINGS (or when someone gains access to your remote hangout without your permission) is a nice recent addition.  I was also pleasantly surprised that I CAN’T BELIEVE IT’S NOT BUTTER can be neatly broken into two pieces of the same length.

That much I’m on board with for the 2.5/5 difficulty part.  Where this felt harder than that (or at least further from my wavelength for common crossword answers) was in the rest of the fill.  Los Angeles Lakers owner Jeanie BUSS is completely off my radar, as is Lash LARUE of old westerns and the synthetic fabric ARNEL.  Similarly, I’m familiar with Art BASEL, but figuring out that GATT was in fact the precursor to NAFTA took a leap of faith.  Crossing fill was helpful in all of these cases, but I had more crossing squares where I just didn’t know what vowel went where in this grid

BTW, You want the other “Live and Let Die” by Guns ‘n’ Roses, AKA GNR. Don’t make my mistake and spend a minute trying to figure out a three-letter nickname for Wings that doesn’t exist.

Be well, all! We’re midway through the week. 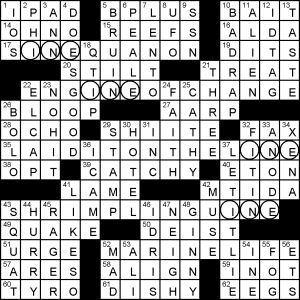 Today’s theme is quite subtle, at least until you get to the simple INE revealer (crossed by INOT and ETS). INE is not something you typically want in your puzzle, but here it is necessary to explain the theme entries’ commonality. Each has the three letters INE (hard to call it a suffix) pronounced differently: two syllables in SINE/QUA/NON and SHRIMP/LINGUINE; one in ENGINE/OF/CHANGE, LAID/IT/ON/THE/LINE and MARINE/LIFE.

New to me: ELCAP as a shortening of El Capitan and RAGER as a party – sounds very 1950’s? Painter Rembrandt PEALE.

DISHY always seems to be [Full of gossip]. Is the sense of [sexy, as a man] not familiar to the US?