Fireball is a contest this week. We will post a review after the contest closes.

Our theme is phrases whose first three letters or last three letters are a [Record genre]. These letters are separated from the rest of the theme answer by a block, hence the title. We get one of these types of puzzles every couple of months from Mike Shenk, so if you’ve been following along, this shouldn’t be too surprising. 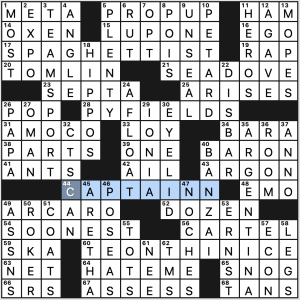 This one doesn’t strike me as being as strong as others in this series, mainly because the title feels off. No one is “breaking records” here, a musical genre is “broken off” in the theme answers, but that doesn’t feel like the same thing.

Other detractors in the grid are “HATE ME? [“Are you really annoyed that I did that?”] which doesn’t sound like a two-word phrase I’ve ever heard anyone say, and the crossing of LUPONE [Tony winner as Eva Perón] with French POIS and uncommon PETARD [Old bomb]. I should have been able to figure that one out, but based on the LUP___, I went with LUPINO and didn’t question it. Thus I ended with PIIS and POTARD in my grid which seemed weird but within the realm of possibilities. With uncommon crossings like that, I’d say it’s more than fair to put “Patti” in the LUPONE clue, giving us solvers a fighting chance. SEA DOVE [Little auk] is also in that corner compounding the ambiguity.

TEAM SPORT and ARGENTINA (not cross-referenced to Eva Perón in the LUPONE clue) are the long Downs, both very nice. Also nice to see Lily TOMLIN [2003 Mark Twain Prize for American Humor winner], colorful “BANZAI!”, and the dancing HIPPOS of Fantasia.

As for clues, I’ll note 1d [Record label?], but it’s nothing to do with the theme, confusingly. The answer is MOST, indicating it’s referring to Guinness-types of records.

This one didn’t do so much for me, as it feels looser than previous incarnations, and the fill  wasn’t there to provide the sparkle. 3.3 stars.

This was a satisfying collab puzzle from Yacob Yonas and Erik Agard, y’all.  Thoroughly satisfying to solve.  Here’s what’s going on: 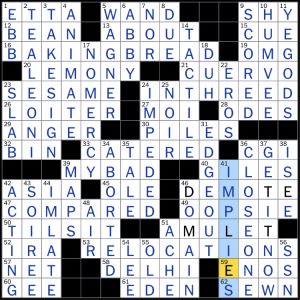 The RE in each theme answer has been re-located, creating a new phrase.  We’ve got BREAKING BAD, IN THE RED, CREATED, and COMPADRE in there once the REs are in their correct places.

This was cute, and cleverly executed.  I wasn’t familiar with TAKE SIGN before, but the crossings were clear and it definitely had to be BAKING going across.

A fantastic debut puzzle here so curiously misplaced! I can only assume that this was a recent submission, because this definitely belongs in the month of March, and it would’ve been a fantastic way to either kick off or close it. 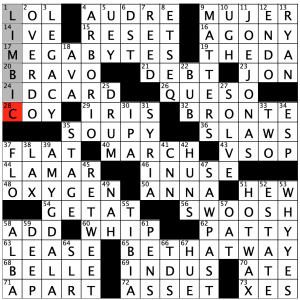 While I wish all of the theme answers had the zippiness of BE THAT WAY! (that entry is also the best at “hiding” the name of the March sister), I thoroughly enjoyed the cleverness of this puzzle. Didn’t bother me in the least that I needed every crossing for AMYGDALA (but I did know LIMBIC system!). The clue for JOE JONAS irked me a bit since it seems to imply that we should be looking to enter a first name only [*Musical brother of Kevin and Nick].

At 80 words, there’s not much room for longer lively entries. When a word count is this high, the theme better be worth it, and this one definitely is!

Favorite mistake was confidently entering BASMATI in place of ARBORIO.

4.2 stars from me! I really wish it were placed correctly, though. The “pat on the back” in the revealer clue would’ve felt fine in March… now it seems a bit too self congratulatory.

Thanks, Olivia! And congrats on a debut! 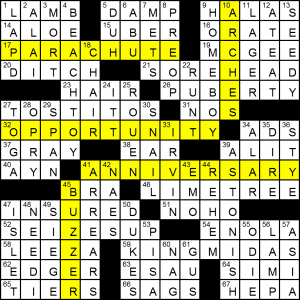 I’ve seen numerous versions of the “implied word” theme. Here, the entries in yellow are clued as though they have an invisible “GOLDEN” in front of them, as revealed by KINGMIDAS. An important touch, for me, is that the clues should only work with the GOLDEN in place. BUZZER and PARACHUTE’s clues satisfy that; as do ARCHES and OPPORTUNITY, kind of. The clue for ANNIVERSARY needs some kind of [50-year] in the clue to make it not satisfy ANNIVERSARY as well.

Not knowing HOMEBOY as clued (a rare local clue for the LA Times) made the intersections with NOS (which could be NRS) and HALAS (LALAS is an association football player…) quite difficult. Did anyone else struggle with those letters? 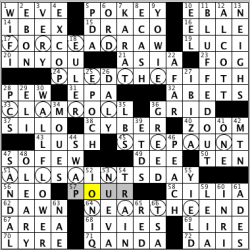 Hello there, again! Here is hoping all of you are staying safe and getting ready for the weekend that probably won’t feel like a weekend.

Today’s grid has a nice little gimmick, as the first, third, fifth and seventh boxes in each of the theme entries are circled. When filled, those letters in the odd-numbered boxes spell out a man’s name.

Just a few days ago, I thought about the number of different words used to describe a jail (“can” and “hoosegow” are my personal favorites), so seeing POKEY was pretty timely (5A: [The can]). While thinking about that was fun, what is not fun at the moment are the number of ads from The EPOCH Times that show up before a number of YouTube videos (25D: [Geological span]). Ugh! Only real hangup when solving was when I put in the masculine “nuevo” instead of NUEVA (53D: [New, in Nicaragua]), but that was quickly remedied when I identified the underrated fill of Q AND A (71A: [Audience part of an event]). Identified with the fun fill of WALLFLOWER, as that was more of my personality at social events in high school (30D: [One uncomfortable at the dance]). Definitely can’t say that I’m a wallflower now, that’s for sure. It will be soon time for my ZOOM meeting and, speaking of Zoom, imagine if you were one of the people who invested in the company before the pandemic-related spike in its usage (40A: [GoTo Meeting rival]). $$$!! But before I go…

“Sports will make you smarter” moment of the day: PEACH (46D: [Georgia symbol]) – I’m sure BEQ would be disappointed that I did not use this space to talk a little more about Boston Red Sox “great” Troy O’LEARY (48D: [Kevin of “Shark Tank”]), who once hit a grand slam and a three-run home run in a decisive Game 5 playoff game victory by the BoSox in Cleveland in 1999. Instead, a little nod to one of the oldest bowl games in college football, as the Peach Bowl, staged in Atlanta, has been played on a yearly basis since 1968. For many years, the game took place on Dec. 31 and would be the last football game played before the start of the new year. Since its sponsorship deal with Chick-fil-A, starting in 1997, the game has steadily increased in the bowl game hierarchy and stature and now routinely hosts semifinal games in the College Football Playoff.

Thank you so much for your time, friends! Have a great rest of your Thursday, and hope you have a good weekend coming up! Stay safe! Keep six feet apart from fellow citizens! Wash your hands! Stay positive…if you can!