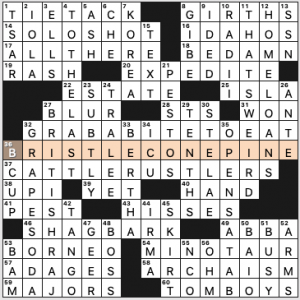 I don’t know about you, but I didn’t much enjoy this puzzle. It started out with the fairly dudecentric TIE TACK atop baseballese SOLO SHOT crossing blah entries like TSAR, IOLA (!), and ELLS. To the right, plural GIRTHS sat on plural IDAHOS, with weird BEDAMN (which is an ARCHAISM, not that I recall encountering the term ARCHAISM before). Three rows into the puzzle, and it had lost me already.

I did like the SHAGBARK hickory, MINOTAUR, and BRISTLECONE PINE a lot. 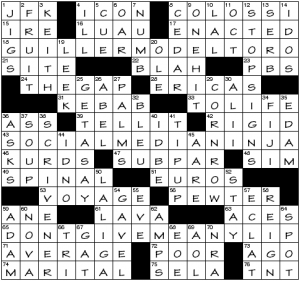 I really like all three of these long answers.

Further, underneath each hidden word is another element to the theme:

More deviations from the norm: 4a [Smaller-than-life depiction] ICON backed by 8a [Larger-than-life creations] COLOSSI.

There is some strain showing in the grid, perhaps due to the abundance of theme: stuff like LAL, ALII, I’D BE, ID NO, TIP UP, AARE, EOE, and -ANE. Regression to the mean?

Quite the extensive puzzle and theme. Let’s go so far as to say it’s above average, eh? 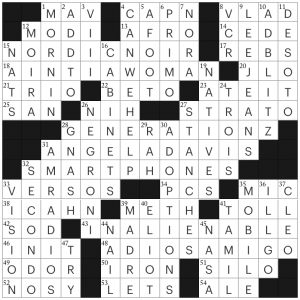 Today I’m particularly grateful for the reversed polarity of the difficulty of puzzles between the New Yorker and the NYT, because I always do the NYT first and it took me so much longer than usual that I was worried I wouldn’t have time to write this one up. Fortunately, the New Yorker Weekend puzzles are easier than their Weekday puzzles, and I made it through this one relatively painlessly. I don’t actually have all that much to say about it, though! This is a solid, easy-ish themeless with a great central staircase.

The long stuff here is great: AIN’T I A WOMAN (clued for bell hooks *and* Sojourner Truth) and INALIENABLE natural rights in symmetrical locations, with ANGELA DAVIS in the middle, gives this puzzle a feminist flair that I appreciate. The central staircase is also solid, with GENERATION Z and SMART PHONES bookending ANGELA DAVIS. Other long stuff: NORDIC NOIR is not a term I was familiar with, but if there’s a New Yorker article about it, it must be a thing, right? I’ve gone back and forth on how I feel about CAN WE HELP, which is so colloquial as to be bordering on “green paint” (aka a sort of arbitrary phrase), but I think I like it?  ADOPTIONS is also lovely, see photo for my animal-shelter happy ending. 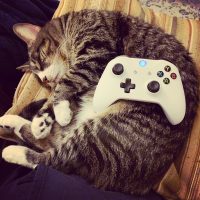 Overall, I enjoyed this puzzle, especially after having a significantly less enjoyable experience with the NYT. Plenty of stars from me.

Theme: Well-known phrases are altered to include a sound-alike food item, and each second word is a container of some sort. 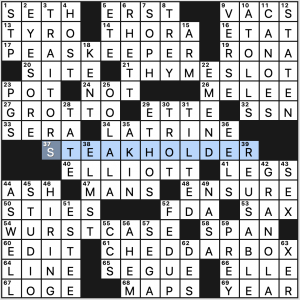 This is really good. Not only do you have the food puns (which are all strong, if not necessarily original), but look at the container words. Each of them also changes meaning from a figurative sense to a literal sense. If any of them is a little iffy, it’s the SLOT in THYME SLOT, because who stores things in a slot? (Maybe a knife or mail?) But I’m willing to give that a pass, because everything else is so nice. Fun theme.

EYESORE, TRAITORS, REUSABLE, and GRANOLA make for fine long Downs, and LATRINE, GROTTO, and Missy ELLIOTT add interest in the Across direction. Plural PGS is rather unsightly, and there’s a smattering of crosswordese (EMEND, ERST, ETE, ETAT, ESTEE, etc.), but the theme already won me over.