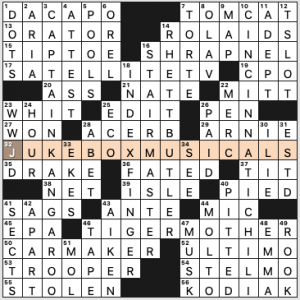 Ah, here’s the Friday puzzle we were missing yesterday. With fun fill and clues, and a more pliable level of difficulty. Weirdly, the opening corner is what stymied me the most, but backing into that section after the rest was filled in, it all worked out.

Really an excellent set of clues. Almost Agardian in the clever freshness.

Your soundtrack for the puzzle is 35a. [Spotify’s most-streamed artist of the 2010s], DRAKE. The video for his latest hit, complete with COVID masking, is below.

I didn’t love all of the fill (two Italian musical terms, T-SLOT crossing CPO, MOL, OREL) but liked the puzzle overall. 4.1 stars from me. 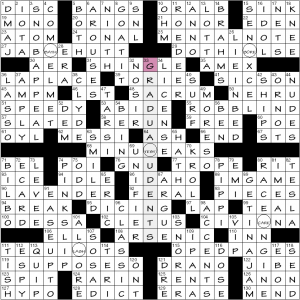 Rebus time. Each circled square hosts a four-letter sequence spelling a word that can follow “eye”.

Quite a lot of theme material. All of the compressed words span two host words, which is a nice bit of consistency. Their locations are symmetrically approximate, which is as much as you could ask for. Not the most exciting theme, but well beyond serviceable. 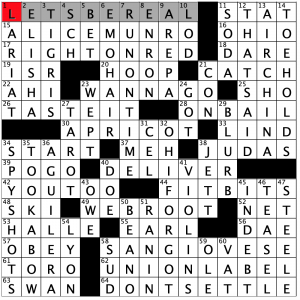 The prolific C.C. is back with a Saturday puzzle, and it is another smooth puzzle from her! It has been a bit since I have blogged one of her puzzles, and I am still gaining respect for her clean grids. This one was not too difficult at all, so perhaps if someone is intimidated by themeless puzzles, this is one to cut your teeth on. But it is easier, not so much from the clueing, but because there isn’t too much in here that you wouldn’t know. But I could be wrong! 4.6 stars from me.

I could go on, but I will stop here! I have a jigsaw puzzle to get to! 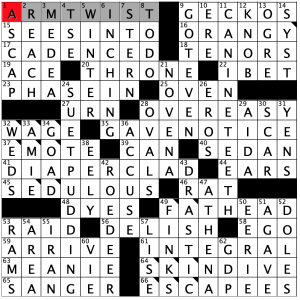 I flew through about 25% of this puzzle, then the Stumperness of this puzzle settled in like a cloud. The joyful torture of these puzzles is hard to describe to someone who doesn’t do puzzles; most people’s reaction is “I can’t do those!” Joshua Kosman wrote a series of articles describing how people are actually rediscovering puzzles during this quarantine. The links are here, here, and here. I know I have revisited jigsaw puzzles in recent weeks, in addition to becoming adept at Zoom!

Yes, I have several errors in this grid, but that’s OK! It doesn’t bother me that you know I struggle with these, and I also learned a new thing or two in this puzzle. But at under 20 minutes, this is a decent time for me on a Wilber Stumper. I’ll take it! 4.5 stars this week.