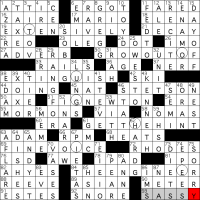 hello and welcome to episode #621 of matt gaffney’s weekly crossword contest, “Run the Numbers”. for this week 4 puzzle, the instructions tell us that we are looking for something you might say after getting the meta. okay, what are the theme answers? this 17×17 grid has seven long across entries whose clues have parenthetical numbers:

okay, there are several things to note here. the first is that, in addition to the parenthetical numbers, these clues are also asterisked. that seems redundant, doesn’t it? the second is that the asterisks aren’t all in the same place—some of them come before the clue, and some come at the end. that must be a hint of some kind.

the next step is to figure out what the parenthetical numbers are doing. they’re not enumerations or indices. instead, each answer is an anagram of those two numbers spelled out, plus two more letters:

the last step is easy if you happen to have done the right thing on the previous step: of the two leftover letters, take the left one if for clues where the * comes first, and the right one if the * comes at the end. in some of the cases, there’s some ambiguity about which one is on the left and which is on the right. for example, GET THE HINT has three T’s and two H’s; depending on which ones you considered “used” for the anagram of EIGHT + TEN, you could be left with HT or TH. the way i did it was to cross off each used letter starting from the left, so that i had ____H____T at the end; then the * picks out the H instead of the T. similarly, THE ENGINEER has four E’s and a G, but i crossed off the first three E’s so was left with GE instead of EG. this is a logical way to resolve the ambiguity; it has the virtue of being probably “the first thing you’d try”.

anyway, reading the selected letters in order reveals TOUGHIE, which is indeed something you might say after getting the meta—or, for that matter, after not getting the meta but reading about the solution here! although i would bet that if you “run the numbers”, there will be more correct answers this week than last week, as the mechanism is not as thoroughly disguised, since the entire theme is there in the longest answers and their clues.

this is a pretty good meta. i wonder if it would have been possible to construct it with only one letter left over in each answer instead of two. that feels like it would have been more elegant than adding *s to pick out one letter (and opening up the ambiguities i mentioned above). but it also might have been slightly easier that way, and maybe matt wanted to beef up the difficulty for a week 4.

what did you all think? let’s hear from you in the comments.