Find a six-letter word whose first two letters are the same as its last two letters. Now take the middle two letters, reduplicate them thus forming a new four-letter word, and add that word after the first one to create crossword wackiness. That’s today’s theme. 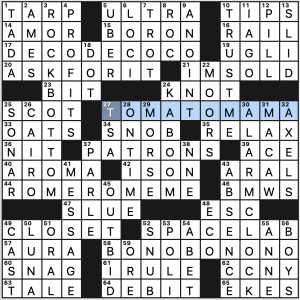 This really doesn’t do much for me. I’m still trying to see the “why” of it. There’s wordplay here, and that’s good in my eyes, but it’s so much better when there’s a reason behind it. Why are we copying the middles of these words and forming new words from them? The title usually gives us a reason for the theme if a revealer doesn’t, but this title feels kludgy and inelegant. It’s certainly not an in-the-language phrase, and I’d argue it doesn’t even accurately describe what’s going on here. Without a solid motivation underpinning the theme’s action, I’m left just asking, “Why?” If it was laugh-out-loud funny, I’d be more forgiving, but I didn’t get that from these entries.

The fill makes up a little bit for what’s lacking in the theme. ROCK BOTTOM is great as is “TRUST ME,” KABOOM!, ASK FOR IT, SPACE LAB, and “I’M SOLD!” ALARM CLOCK is solid as well.

I really wanted something more from this theme than what felt like random wordplay. The surrounding fill and grid is nice though. 3.2 stars. 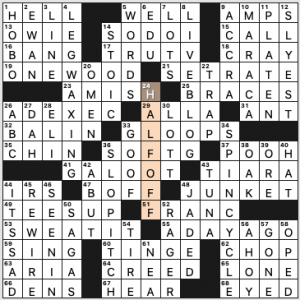 The theme revealer is HALF OFF, 24d. [Discounted 50% … or a hint to the answers to the starred clues]. The starred clues lead to a bunch of 8-letter reduplicative answers (reduplication is the linguistic term for a phrase or word that repeats a word exactly or with a change), but only one 4-letter half appears in the grid:

Reasonable theme. With under 40 theme squares and 78 words, the fill should be pristine. It’s pretty good, though I didn’t love SO DO I, GLOOPS, IT’S SAD, and DAH. 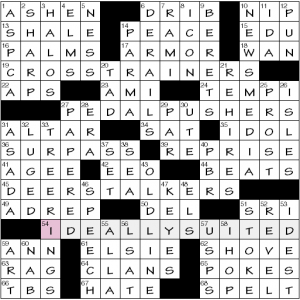 So. Two types of shoes, one hat—and the hat clue/entry is off. I call that a failed theme. Nice revealer, though. edit: Pedal pushers are of course pants and not shoes, as sanfranman59 helpfully comments below.

Oh, and maybe attire should have been avoided from the ballast fill? 9d [Floppy caps] BERETS, 17a [Knight’s protection] ARMOR. With  just two it feels like sloppiness rather than going all-in and indulging the theme. Hmm, do HALOS (3d) count as clothing?

Far, far from a bad puzzle, but I daresay it got derailed along the way. 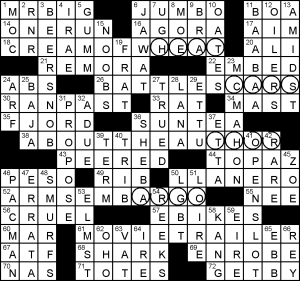 Today’s theme is MOVIETRAILERs, and four answers end in four-letter films, circled for your convenience. It’s good that the movies have something more in common, because there are a rather a lot of movies out there… M, W, Us, Up, It.

New answers or clues (there were quite a few today!): 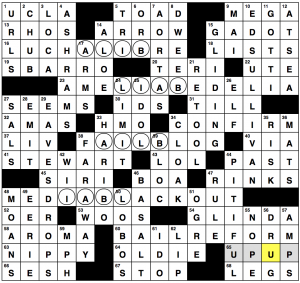 This week’s AVCX from Nate Cardin and Martha Kimes, “The Price of Freedom”, has a good cause behind its theme.  In addition to that, it’s a debut in the AVCX from Martha – congratulations!  Let’s dig in:

The Bail Project‘s work is particularly crucial in the midst of COVID-19 (for reasons outlined here), and I hope if you enjoyed this puzzle like I did, you consider donating.  I thought the theme here was a great translation of the cause into a theme (even if I’m side-eyeing the heck out of FAILBLOG — I love Cake Wrecks as much as the next person, but I don’t think a failblog is enough of a thing on a level where it can be crossword fill)

I spent too long trying to figure out a five-letter word for TRIO that described the majority of songs by The Supremes. It turns out that all those songs are also OLDIEs

Be well, all!  We’ve almost made it through another week.