Since I know male and female Jordans, I checked Facebook. As far as I can tell, Jordan Hildebrandt identifies as male. So the Fireball continues its nearly unbroken streak of male-made puzzles.

I didn’t figure out what was going on with the theme until I got to the revealer. It was fun when it fell into place.

Each theme entry is missing something. The revealer tells us: 54a [Fascinated by fame … or what 18-, 28-, 35-, and 42-Across are?] is STARSTRUCK. STAR is STRUCK from each phrase. Wackiness results. 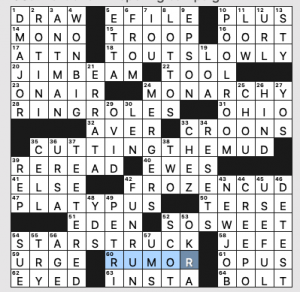 I like the way the STAR moves from the beginning to the end of the themers as you go down the grid. All the base phrases are solid and the wacky answers are amusing. It’s not blazingly hard, but it is satisfying.

What I didn’t know before I did this puzzle: that JIM BEAM dates back to 1795, and that Lao-Tzu lived during the CHOU dynasty.

Happy Thursday, all!  It’s my seventh week of quarantine and I think I’ve finally gotten the hang of this.  I miss being in the office (which feels weird, as an introvert), but there’s a new rhythm to things.  Since it’s Thursday, let’s talk about the NYT.  Today’s puzzle is from Caitlin Reid, and its middle revealer points out what’s going on along the edges.

At the center of it all, 35A clues “Goal-scoring opportunities in soccer…or a hint to this puzzle’s theme”.  Those would be CORNER KICKS, and we indeed have four different types of “kicks” populating the corners of the grid: 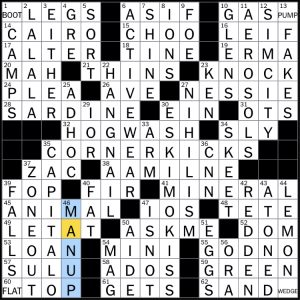 Our theme is INTERNAL ORGANS (53a, [Essential structures exemplified by this puzzle’s circled words]). 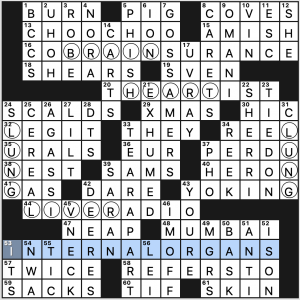 The title calls to mind an x-ray and the general placement of the theme entries seems to confirm this (note the vertical positions of the two lungs). But the proximity of the organs to one another doesn’t quite resemble any x-ray of the human body that I’ve ever seen, especially looking at how close the brain is to the heart. So unfortunately I became distracted by this and how far apart the lungs seemed to be and how the brain isn’t centered.

Oh, and I forgot about the SKIN at 61a [Layer that contains the theme answers] which is odd to say. While it’s true, no one would ever really say that the brain is contained within skin since it’s encased by the skull more directly. I’m not sure the puzzle is better off for having this bonus revealer.

But I do appreciate the creativity here and since I think this is a debut, I definitely want to offer my congratulations for an interesting grid.

Fave bits of fill include CHOO-CHOO, GOSSAMERS (though it seems odd in the plural), MUMBAI, and jam band PHISH. I didn’t know PERDU [Pain ___ (French toast, in France)], which crosses proper name SHERRI [Shepherd formerly of “The View”].  R is the only letter that really makes sense there, but I wonder if anyone got caught by that. I’m thinking that PHO crossing the P in PERDU is probably knowable by the majority of solvers at this point.

I like the concept of this theme, but since it’s purporting to “look inside” the human body, I would expect the organs to be positioned appropriately. 3.25 stars.

Look to the title, and you’re bound to see the theme!

THEME: “Dishes” are hidden on one side of each theme answer. 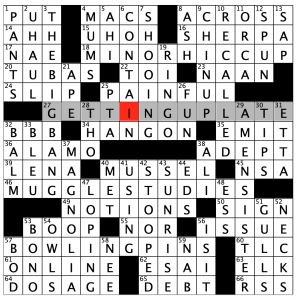 I liked this one! I totally missed the seem during-solve, but it was fun to go back and find what I didn’t see the first time. Gotta check those titles!

No problems with much of anything! Very enjoyable solve. 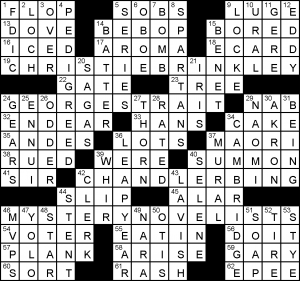 Today’s puzzle is the second extra wide one in a row. Today’s theme is mystery authors’ surnames that can also be… first names? Agatha Christie & Raymond Chandler I can name, but I was less sure about GEORGE. Apparently Elizabeth George created the Inspector Lindley mysteries.

The grid is felt carefully balanced, given the long theme entries, with only a few difficult answers that were well-spaced: NARA and BENET, e.g. which with moderation added a little colour to a grid where the long down answers all spanned two theme entries and were thus required to be more functional in nature. 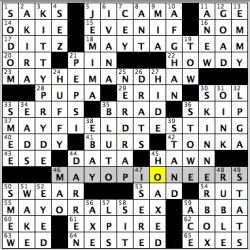 May day! May day! Well, it’s not May just yet, but I do hope you are all doing well on this final day of April.

We are about to usher in the fifth month of the calendar year, and today’s grid is an homage to that as puns are made out of common phrases/proper nouns by adding the word “MAY” to the beginning of the phrases.

Probably what stood out the most in the grid, in a positive way, were the paralleling entries of KITTY PRYDE (3D: [X-Men mutant with phasing abilities]) and SKINNER BOX, the latter of which I had not heard since I left my psychology major days behind after graduation many moons ago (30D: [Behavior-changing chamber named after an American psychologist]). Even with the minimal amount of times I had heard the term NERD RAP before today — including, apparently, during an episode of Jeopardy! in which a contestant mentioned that she was part of that music scene only for Alex Trebek to playfully call them “losers”  — just reading its clue gave me the courage to put that in there and not worry about messing that up (25D: [Genre for MC Frontalot and MC Hawking]). If I remember correctly, there are now nerd rap diss tracks of Alex after that show?! Not going to look it up and go down that rabbit hole, as I have enough of those that I have yet to come out of!

“Sports will make you smarter” moment of the day: CEY (7D: [Dodger Ron nicknamed “The Penguin”]) – One quarter of one of the greatest infields in Major League history, third baseman Ron CEY (pronounced “say”) was a stalwart on the Los Angeles Dodgers’ teams of the 1970s and early 1980s that went to four World Series in a span of eight years (1974, 1977, 1978, 1981). In the 1981 Fall Classic, Cey was named a co-World Series MVP as Los Angeles came back from a 2-0 series deficit against the New York Yankees to win in six. Cey teamed up with shortstop Bill Russell, second baseman Davey Lopes and first baseman Steve Garvey on the Dodgers infield as they started in 833 games as a unit, the most starts by an infield quartet in MLB history. According to Fangraphs, the Dodgers posted a near-.600 winning percentage in those games the four started as an infield unit (498-335, .598 win%), which prorates to a 97-65 record in a 162-game season. Not bad!

Thank you so much for your time, friends! Have a great rest of your Thursday, and hope you have a good weekend coming up! Stay safe! Keep six feet apart from fellow citizens! Wash your hands! Stay positive, if you are able to!