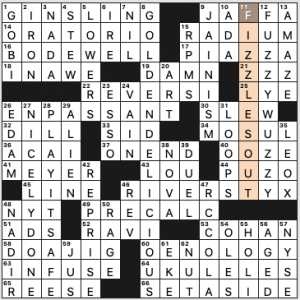 Well, that’s a new one: the Scowl-o-Meter (i.e., my face literally crinkling in mild disgust) was triggered by two foodstuffs I don’t care for. GOLDEN DELICIOUS apples are an inferior hybrid, and I’m not a fan of DILL, on potatoes or elsewhere. (I like EDAM, have not tried ACAI, drank a lot of RC COLA as a kid.)

I couldn’t make headway in the opening corner, and filled in the whole rest of the puzzle before getting many letters here. Is GIN SLING an actual cocktail? Doesn’t ring a bell. Didn’t know McCartney composed an ORATORIO. Went too broad for the Bactrian camels (ASIA instead of GOBI), 4d [Fretful thing to be in] could be a SNIT as well as a STEW, and I opted for explosive TNT instead of IRE. Was also reading 5d. [Turns down] with the rejects meaning rather than LOWERS. Oof!

Fave fill: BODE WELL, PRECALC, DO A JIG, full UKULELES, “NICELY DONE,” PLAY IT SAFE (wear your mask! wash your hands! stay home if you can!), JAINISM, HOLI, FIZZLES OUT, and FUZZY WUZZY the hairless bear.

Could sure do without: ESSO, LEO X.

Did not know: 33a. [Half brother of Tom Sawyer], SID. I did read Huckleberry Finn a few years ago for the first time. Also didn’t know 41a. [1968 swimming gold medalist Debbie], MEYER.

True to form, Erik has given us another beautifully crafted themeless puzzle that is a tribute to a woman of color whose work and achievements more than deserve the spotlight they receive here. As is often the case with Erik’s puzzles, I had never encountered NTOZAKE SHANGE, but every crossing was perfectly gettable and fair, so my own unfamiliarity with her barely slowed me down going through the middle. Also as usual with these puzzles, I ended up down a Wikipedia rabbit hole reading about NTOZAKE SHANGE‘s work and choreopoems, and I feel like a more educated human because of it. Man I love the New Yorker. 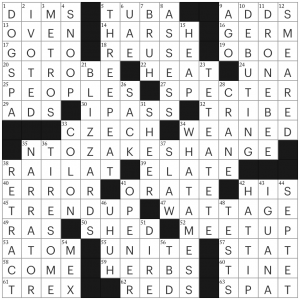 Aside from that signature central entry, we’ve got some other fun longish stuff: THREEPEAT (with an *excellent* clue), BLIZZARDS (lots of Z’s in crossworld today, eh?), TÊTE-A-TÊTE, WHAT A MESS!.

Overall I am having a hard time finding any nits to pick with this puzzle. Personally, I’m gonna give it all the stars. Happy Friday! 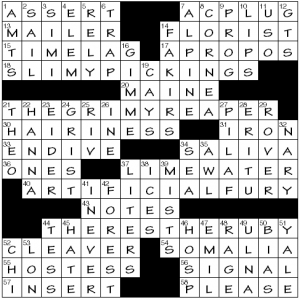 The letter Y is suffixed to the first word of two-word phrases, to humorous effect.

Furthermore, Ys are absent from the rest of the grid. Elevates the theme. 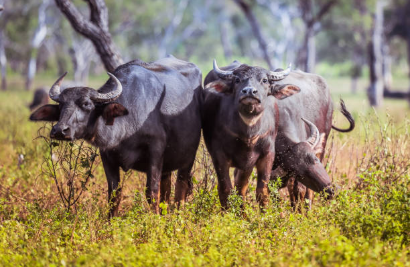 Looking for a tie-in, I found a 2019 genetics paper, “Copy Number Variations of Four Y-Linked Genes in Swamp Buffaloes” but as you can imagine it’s rather technical and not too much fun for our context. But at least referencing it affords me an opportunity to share a photo of Bubalus bubalis.

The title tells us that an S is removed from our theme answers, but it does more than that. Since the entries are all in the Down direction, it tells us that a thief took the starting Ss (esses?) from the top. 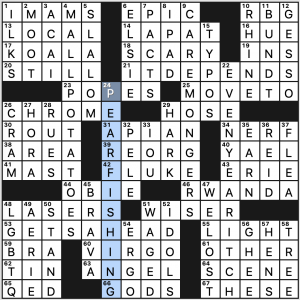 Fun entries, and I love how the title supplies the motivation for the theme. A very enjoyable concept and equally entertaining execution. Well done!

In the long fill, “IT DEPENDS” and GETS AHEAD are the stars of the show, and a dejected “WE LOST” adds color. I did not know YAEL [Stone of “Orange Is the New Black”]. In fact I’ve never heard that first name before, but there is another actress with that name: YAEL Grobglas of Jane the Virgin.

Cluing felt pretty straightforward, so there’s nothing I feel is particularly noteworthy, but everything flowed smoothly and cleanly. This was an enjoyable grid. 3.8 stars.