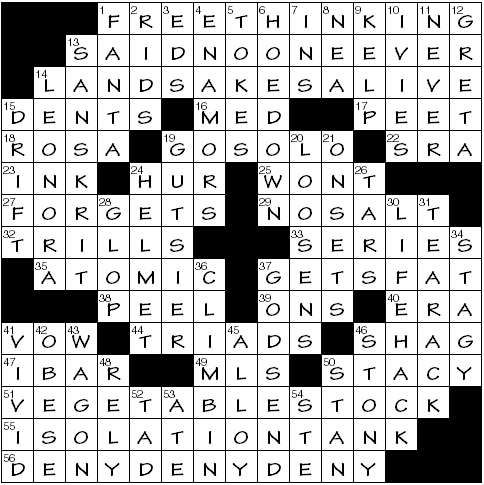 What a pretty, flowy grid! Sort of a super S with various paths to meander while solving. Not as challenging as I was hoping, though.

19a. [Emulate Beyoncé in 2003] GO SOLO. This week’s new Beyoncé content is the remix of Megan Thee Stallion’s “Savage,” and Queen Bey’s guest verses are all rapped. The money Megan and Beyoncé earn from the song is going to an organization called Bread of Life Houston.

29a. [Kind of diet that can help lower blood pressure], NO SALT. That’s not really a thing, I don’t think. No added salt. Reduced salt. But straight-up none? You’d end up hyponatremic, losing your mind from not having enough sodium in your bloodstream.

27a. [Leaves back at the house, maybe], FORGETS. I absolutely decided this clue was talking about tree leaves in the backyard.

15d. [Get carried away], DRIFT. Just seeing the word in the grid implanted a “Drift Away” earworm.

31d. [Caddy alternative], TEA RACK. This is maybe a thing I have never heard of? I guess restaurants might have them? Do you know anyone with a tea rack at home?

50d. [Obsessive fan, slangily], STAN. Inspired by Eminem’s song, “Stan.” It’s also a verb, as in “Paolo put SAID NO ONE EVER in his grid and we have no choice but to stan.” 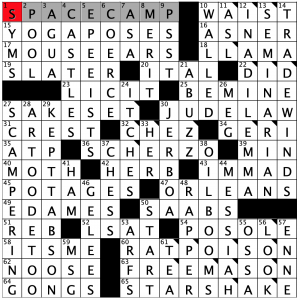 I thought I had this one in the bag! I had about 1/3 of the grid filled in almost immediately. Then it became a Stumper. The left half of the grid I found fairly easy, and for once I had 1-Across and that whole area filled rather quickly! But, as you can see from the error marks in the grid, it was quite the slog. I forget who this pseudonym is a hybrid of, but this is quite the puzzle. I hope you found it a satisfying challenge as well! 4.6 stars today.

Some of that hard stuff:

I will stop there! There is finally a day to do yardwork! Also, there is a new Panda Magazine coming out later today! Lots to do! 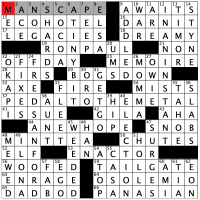 I am sure I have done puzzles by this constructor before, but it seems like it has been a while! I should probably be keeping some sort of database about who I am blogging about; there’s another fine quarantine activity to get started! Breezed through this one, so maybe I am rounding into ACPT form, if that in fact does happen this coming September. Will we be back to normal soon? It is hard to say. Until then, we will keep puzzling! I think I am on Trent’s wavelength, and I vaguely remember saying something similar when reviewing his puzzles before. A fun solve this week; 4.3 stars.

Let’s just put this here first, shall we?

All right, now that we have some mood music going, here’s the crossword. 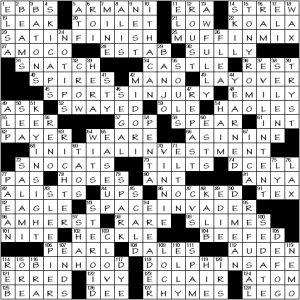 Theme is two-word phrases—the first word ending with -IN—parsed as three words, with IN becoming a preposition.

These are all quite clever and entertaining. And there are quite a lot of them.

Puzzle flowed smoothly for me, with a slight snag finishing up MUFFIN in the northeast. Affected by the tough-ish clues for 34a [Knight spot?] CASTLE, 35d [People] SOULS, 13d [Very] AWFULLY, 43a [Follower of a touchdown, perhaps] LAYOVER. 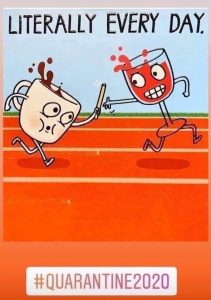 I believe some of us can relate.